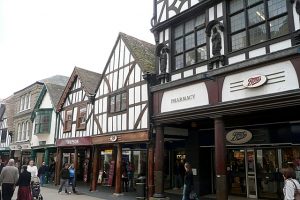 The Pentice, Winchester. Scene of an altercation between three women, 28 September 1544. / Wikimedia Commons

On Michaelmas Eve, 1544, two women came to blows in the open street in Winchester.

We know who they were. We know the approximate time (two in the afternoon), and we know there were plenty of witnesses. We also know exactly where the fight took place, for when the case came to court, the brawl was described as happening in the High Street, ‘under the Pentice’.

The Pentice is still there – a covered walkway in the centre of town, on the High Street, with some surviving Tudor-era buildings. Basically, the fight took place just outside Boots.

We don’t know what started it off. The first we hear is a witness saying she saw one Mistress Foster strike at her neighbour Agnes Haycroft, ‘upon whom with the nayles of her fynger she had drawen blod’. Ouch.

Haycroft, sensibly, retreated – allegedly to call out her maidservants. Foster, meanwhile, was joined by her daughter, Frideswide Hodson.

Hearing the clamour, no doubt, Frideswide had come out of her own house, and saw her mother at her door. She asked her who had been reviling her. ‘That howsewyf Haycroftes wiff’, mother Foster said, ‘bryngith hir maydes up to beate me at my owne dore’.

Frideswide was incensed. ‘That brazenfaced hore’, she said. ‘That meseld faced and skaled hore Haycroft wiff, she will never be contended till she be dreven owt of towne with basons as hir mother was’.

‘Mother,’ she said, ‘if I had bene there I wold have knoked hir furryd cap & her hed together’.

By this time, Agnes Haycroft was back, and she challenged Frideswide. ‘Wold you have don it’, she scoffed, ‘yow pockye nosed howswife’.

To this, Frideswide exploded: ‘Agnes Haycroft nay thou pokey nosed hore, feiste thow, thow meseld faced hore, thow camest to towne with a lepers face & a skalled hed, And I defye the[e] utterly, for I wold thow knewist yt that the fowlest place of myn arse ys fayrer then thy face’.

Within a couple of months they were in court. 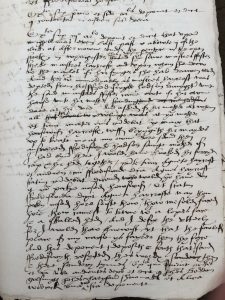 Historians, of course, have long recognised that the words we use to insult each other can tell us a lot about ourselves. They tell us what a society thinks is unpleasant, disgusting, and beyond the pale of decency. This in turn can help us understand social ideals. By seeing what isn’t good, we can see what people thought was. Insults are a key to understanding how a society saw itself – how ordinary people, who rarely actually wrote about these things, thought about the world.

It has, for example, been long been noted how gendered the world of insult was in Tudor and Stuart times. Men were called all kinds of names – women tended to be called whores. In fact, as Laura Gowing memorably argued, so different were the terms of insult aimed at men and women at the time, that male and female notions of ‘honour’ were ‘wholly incommensurable’.

Of course, we have to be super careful about using insults found in legal records. The law of defamation was quite restrictive: people didn’t necessarily have the right to sue for mere hurt feelings.

They could sue people for accusing them of specific crimes, or where insults had a specific economic consequence. Thus, if you accused someone of being a witch, then they might bring a suit of defamation against you, and we’d have a record. If you just called them an arsehole, then this wouldn’t be recorded. Sadly there isn’t, and there hasn’t ever been, a law against being an arsehole.

In many cases, though, the specific language of insult was recorded by the court. This meant not just the ‘actionable’ word (e.g. ‘whore’, ‘thief’), but also any additional flavour: (‘filthy whore’, ‘false thief’).

To take an example, one of the most striking insults uncovered by Professor Gowing is the Londoner who yelled, at one of her female neighbours: ‘Thow hacking queane, thou hacking jade, comon ridden Jade, codpeace whor, codpeace queane, thow monster thow!’

To the court, the words ‘queen’, ‘jade’, and ‘whore’ were of interest, for these were the actionable words, as (for reasons I’ll go into in a moment, was ‘ridden’). But to us, the other parts are incredibly striking too: ‘hacking queane’, ‘common ridden jade’. ‘Monster’, and – of course – ‘codpiece whore’. These are hard to interpret. Why did these words in particular get used? What can the additional words, tacked on to the actionable insults, tell us? 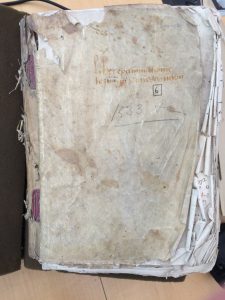 The Deposition Book of the Winchester Diocesan Court, 1533-48. The court sat at Cheyney Court, pictured at the top of this post, though the present building is Elizabethan. / Hampshire Archives

One common element in these was accusations of worthlessness. To be of little worth was seen as a very bad thing, deserving of insult. Thus ‘common’ jade. Thus also, in 1610, a Worcestershire gentleman called the inhabitants of Childswickham and Murcot ‘by foule names, viz. dastardly roogs, beggers, and cowardly knaves’.

The word ‘naughty’ probably carried such connotations too – literally ‘nought-y’.

One widow of Dilston, Northumberland, was in 1577 called ‘a nowghtie false strumpett’. In Leckford (Hampshire), in the 1530s, a local man was told: ‘thow art a nawgthy fellow & thow hast made Alice Powar a nawghty woman’, and ‘thow art a nawghty knave and thow kepest Alice Powar & dust make her nawght’. In the same county in the 1540s, a woman was accused of being an ‘arrent hore and nowghtie commyn hore’.

Sometimes, this also came with connotations of vagrancy and rootlessness, such as the Wiltshire woman who was called ‘hedge whore, barn whore’, and ‘hollow tree whore’.

The biggest common thread, though, was disorder. In fact, disorder, in its many forms, lay right at the core of the early modern insult.

‘Thou art a nawghty knave & thow hast made Alice Powar a nawghty woman’.  From the testimony in Winchester, 1544. / Hampshire Archives

Sometimes, the implication was that people were disorderly to their community.

When a London woman, for example, was called an ‘audacious whore’, it was a reference to her unacceptable loudness at a time when women were supposed to be quiet. Another woman from St Laurence Winchester, was in 1534 told by a male neighbour ‘thow art an arrant hoore a stronge hoore and a froward hoore’, and ‘gotte the whom [get thee home] thow arrant hoore for thow art a strong hoore’.

‘Goo home’, Elizabeth Gate of Thruxton, Hampshire, was told by another male neighbour in 1543, ‘and lo[o]ke thy owne howse be clene for there is no good rule kepte’. The insult rested on the woman’s inability to keep her house clean, and her apparent gadding abroad.

Nor was it just women who threatened the social order. In 1640, the rector of Bridport, Dorset, had it whispered menacingly in his ear that he was ‘a base knave, a daungerous knave, a base rogue, a dangerous rogue’, and that he ‘sought the blood of honest people’. He was, the insult had it, both ‘base’ and ‘dangerous’. Worthless and disorderly.

Particularly striking, though, is the way the human body was used.

Insults were often framed in terms of ugliness, disease, and bodily disorder. This kind of slur was central to the language heard under the Pentice in Winchester. ‘Pocky whore’, ‘Measel-faced whore’, ‘Thou camest to towne with a leper’s face and a scald head’; and, of course, ‘The foulest place of my arse is fairer than thy face’.

Nor was this the only example. On Palm Sunday, 1583, William Riley, the mayor of Woodstock, chased George Whitton through the streets of the town calling him ‘vile skurvie knave, a stinckinge knave, a spyinge knave’. In London, Professor Gowing found women called ‘maggoty whore’, ‘pocky lousy hedge-whore’, ‘scurvy fat-arsed queen’, ‘gouty-legged whore’, even ‘piss-a-bed whore’. In Alston Moor in 1599, John Musgrave was told by John Ley that ‘thow art a rated raskold’, which was Cumbrian dialect for ‘rotten rascal’. Two drunken Yorkshiremen, trading insults in Halifax in 1641, called each other ‘lowsy tailor’ and ‘stinking smugge’.

People were accused of mental disorder, or monstrous or animal-like behaviour. Like the Hampshire-woman, who in the 1540s yelled at her neighbour Alice Inkepen (after Evensong), ‘thou art a beast and a drab’. Or Jane Stourton of Up Cerne in Dorset, whose enemies in the 1550s put about the ‘markettes parishe churches and other open assemblies’, calling her ‘coukcowe [cuckoo], bedlam, maddwhoor with other dispitetuouse words and names of reproche’.

Or, of course, the Londoner who yelled ‘Thow monster thow!’ 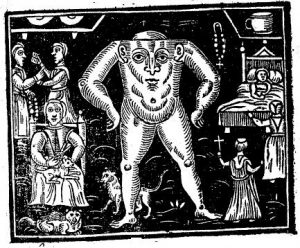 Naturally, of course, disgust was often expressed with reference to the usual bodily evacuations.

People might be called ‘shitten whore’, or told ‘a turd in thy teeth’ or – more extravagantly – ‘ten turds I do toss in your teeth’. The fart, meanwhile, was the go-to bodily function for the expression of contempt. ‘I care not a fart’, was a standard dismissal, though some were more creative. When Henry Cotton of Moze (in Essex) was reported in 1592 for not attending church, he came before the local churchwardens, and ‘very unreverently and contemptuously farted unto them and said, “Present that to the court”’.

Funnily enough, though, the fart seems to have been quite different from other expressions of disgust and disorder.

Farting was still, generally, seen as a healthy thing to do. Better out than in, many thought. To fart at someone did not yet mean you had lost control of your body. In fact, it rather meant the opposite: you were purging it of undesirable elements, rebalancing your humours. In short, people who farted were good – they were ordered; those who were diseased, or ‘shitten’, were not.

The fart, in fact, was a form of purge, and we’ve seen the notion of the purge elsewhere, too.

When someone was called a ‘common ridden jade’, the word ‘ridden’ was a reference to the popular ritual of ‘riding the stang’ where an undesirable neighbour was ritually humiliated by being ‘ridden’  around town, often on an  ass, with the sounds of people banging their basins, pots and pans (known as ‘rough music’). Often, the ‘riding’ would end with their symbolic expulsion from the town.

These were purging rituals. The noise of the basins symbolised disorder, ending in the expulsion of the disordered criminal from the town’s body. Each town was a ‘body politic’, and those bodies sometimes needed cleansing.

The Winchester case contains a similar reference too. Agnes Haycroft, said Frideswide Hodson, ‘will never be contented till she be driven out of town with basins as her mother was’. Frideswide was specifically saying that she was ugly and disordered, and that she should be purged.  She was drawing a link between Agnes’s disordered, measelfaced body, and the disorder she represented in Winchester’s body politic.

All this, of course, speaks to one of the biggest fears of the age: the fear of disorder. This meant all kinds of things: famously, it meant respect for the ‘natural’ social order. It also meant an absence of ‘disorder’.

In some senses, we might expect those at the bottom of the social pile to be much less invested in the social order, but the way they insulted each other tells us otherwise. Their worldview was clear: disorder was bad, order was good. The way they insulted each other was political, and politics of the early modern insult was the politics of order.

Perhaps this represents the cultural hegemony of the social elite – they had convinced ordinary folk that overturning the social order was against their interests.