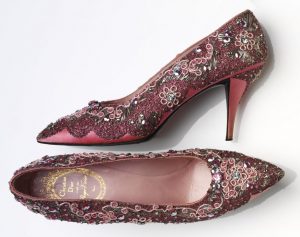 A walk through some of the more extreme examples of historical shoes. 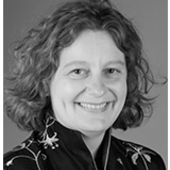 Shoes long ago eclipsed their primary function – to protect feet. For thousands of years shoes have elicited extremes of both pain and pleasure. It is this long and varied history of shoes that the V&A’s forthcoming exhibition showcases, spanning more than 2,000 years. The oldest pair on show date back to Ancient Egypt, while more contemporary designs show that advancements in technology and 3D printing have pushed the bounds of what is technically possible to achieve with footwear.

As an object the shoe has transformed from its functional origins to become wearable art. Some of the more extreme shoes featured in this exhibition even demand questions as to their feasibility to be worn. More contemporary exhibits include Zaha Hadid’s Nova shoes, constructed with a 16.5cm heel. 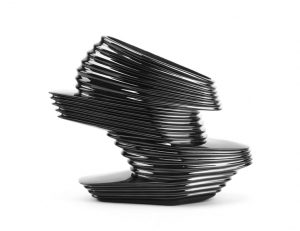 Vertiginous to an extreme, the towering heights of heels are not, however, a modern-day phenomenon.

Renaissance Italy provides one of the most striking instances of the shoe’s extreme history. Venetian women of status popularised the wearing of a style called the chopine. These platform shoes were often crafted from wood or cork. And 15th-century Venetian gentlemen were very keen for their wives to wear these extremely high shoes, according to Elizabeth Semmelhack, senior curator at The Bata Shoe Museum. This was because of the way it hindered their mobility – and therefore, the idea goes, they would be less likely to run off with other men. Indeed, very often these women would have to be accompanied by attendants to ensure that they didn’t topple over. Chopines would be an average of around five and a half inches but their height was rumoured to have reached up to 20 inches. 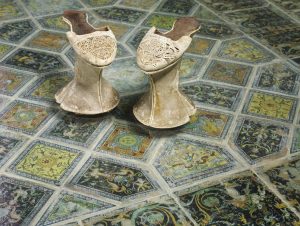 Not only did the elevation project the wearer’s social standing, but the height served to protect them from the dirty streets of Venice. As elevations became more extreme, Venetian sumptuary laws were even brought in to address the ridiculous nature of these shoes. In 1430 the Venetian Major Council forbade the wearing of chopines that were more than three and a half inches in height. Chopines were by this point condemned as an insult to God, perilous to the wearer’s souls as well as their bodies.

Although the chopine was highly gendered and extreme shoes were more usually associated with women, men were, historically, also avid heel wearers, as Rebecca Shawcross reveals in her historical overview of shoes. This was epitomised perfectly by France’s King Louis XIV, whose red-heeled shoes became an emblem of political allegiance: aristocrats wore red heels to demonstrate their allegiance to the King. 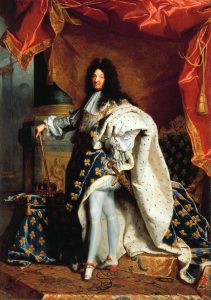 Fast forward a few hundred years and the somewhat barbaric nature of the shoe was far from forgotten. In 1937 Magritte painted The Red Model, which exemplified the rather unnatural relationship between shoes and the foot. The central focus of the painting is a pair of worn leather boots which merge into the image of human feet.

This torturous side of shoes comes to the fore in the exhibition by the presence of lotus shoes and the historic practice of foot binding. Foot binding, once the symbol of beauty and social standing, was outlawed in China in 1911. The traditional and extreme custom of binding and the wearing of lotus shoes was culturally meaningful and ensured that women were able to find suitable husbands. Traditionally feet were bound from a young age, stunting growth as the small foot and subsequent impeded mobility was a sign of great beauty. 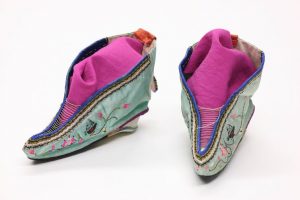 The introduction of fetish shoes in the late 19th century brought another dimension to the painful but pleasurable experience of shoes. Fetish footwear was defined by exaggerated heel heights: clad in shoes the foot here became a mysterious, yet powerful weapon.

In 1910 for example, soft-core pornography journal Photo Bits published a serial story: Peggy Paget’s Patent Paralysing Pedal Props. These were 18-inch heels. Constrained inside a narrow and very high shoe, the foot exerted a feeling of great pain, counterbalanced by the pleasure of exciting the imagination of both wearer and observer. 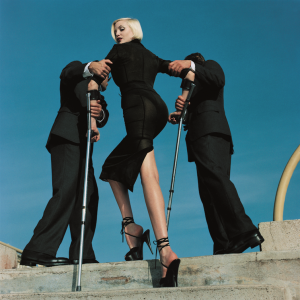 These historic examples of shoes may seem extreme and even ridiculous. But they were all designed and worn to reflect a range of different cultural and social meanings. Through the presentation of a long, significant and sometimes exotic history, the V&A shows how shoes – although they might seem frivolous or ridiculous – have come to be understood as serious objects of cultural reference. Today, extreme shoes by designers like Christian Louboutin are very much part of mainstream culture. Women are still often prepared to endure pain for pleasure.