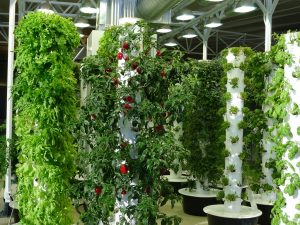 There’s really nothing not to love about vertical farms — multi-story hydroponic operations, usually sited in dense urban areas — they borrow their best tech from the space program, they’re water-conserving, they don’t have runoff, they’re energy efficient, and they’re super land-efficient, meaning we don’t need to turn forests or wetlands into fields.

The New Yorker’s profiles of the inventors of modern vertical farming has the usual New Yorker lyricism and slightly-too-long-ism, and is a little short on technical details, but it left me with a warm glow this morning. It’s a good example of bright green tech, the kind of thing we’ll need as our population stabilizes at 9 billion — the alternative being the “de-growth” dystopia that starts with 4-6 billion people somehow departing the planet.

For now, vertical farms focus on selling high-margin/high-ticket baby greens in fancy grocery stores, but its proponents argue that they’ll scale up through luxury goods, then Moore’s Law their way down to the rest of the world. There’s also a curious note about a secret process for misting or steaming the veggies that uses a proprietary and unpatented system that the inventor believes no one will ever be able to figure out, which is a claim that the writer allows to pass without comment, despite its extreme implausibility.

AeroFarms occupies three other buildings in Newark aside from the main vertical farm, on Rome Street. At 400 Ferry Street, it has a thirty-thousand-square-foot space whose most recent previous use was as a paintball and laser-tag entertainment center called Inferno Limits. The graffiti-type spray-painted murals and stylized paintball splatters of that incarnation still cover the walls. AeroFarms’ headquarters—sometimes referred to as its “world headquarters”—are in this building, some of which is taken up by a multiple-row, eight-level vertical farm that glows and hums. Technicians in white coats who wear white sanitary mobcaps on their heads walk around quietly. Some of these workers are young guys who also have mobcaps on their beards. The salad greens, when you put on coat and mobcap yourself and get close enough to peer into the trays, stand in orderly ranks by the thousands, whole vast armies of little watercresses, arugulas, and kales waiting to be harvested and sold. For more than a year, all the company’s commercial greens came from this vertical farm.

Nobody in the building appears to have an actual office. Employees are distributed in more or less open spaces here and there. In a dim corner of the area with the vertical farm, where the fresh, florist-shop aroma of chlorophyll is strong, young graduates of prestigious colleges confab around laptop screens that show photos of currently germinating seeds and growing leaves. Folding tables burgeon with cables, clipboards, and fast-food impedimenta. David Rosenberg, the C.E.O., who hired Ingrid Williams last year, is the boss. This distinction is hard to notice, because he looks more or less like anybody else.