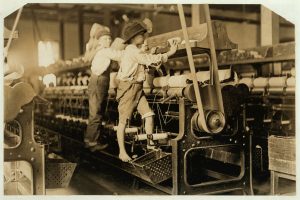 From the ashes of the American Civil War sprung an economic powerhouse.

The Golden Spike: Does it really symbolize the completion of the transcontinental railroad? / Roadside America

The factories built by the Union to defeat the Confederacy were not shut down at the war’s end. Now that the fighting was done, these factories were converted to peacetime purposes. Although industry had existed prior to the war, agriculture had represented the most significant portion of the American economy.

The growth was astounding. From the end of Reconstruction in 1877 to the disastrous PANIC OF 1893, the American economy nearly doubled in size. New technologies and new ways of organizing business led a few individuals to the top. The competition was ruthless. Those who could not provide the best product at the cheapest price were simply driven into bankruptcy or were bought up by hungry, successful industrialists. 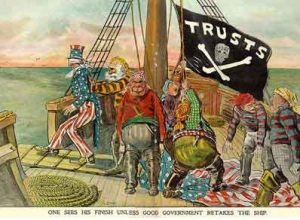 The so-called captains of industry became household names: John D. Rockefeller of Standard Oil, Andrew Carnegie of Carnegie Steel, and J. Pierpont Morgan, the powerful banker who controlled a great many industries. Their tactics were not always fair, but there were few laws regulating business conduct at that time. 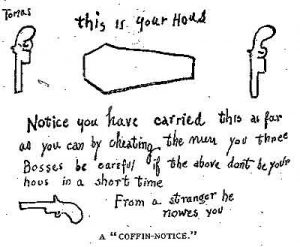 The “Molly Maguires” were a band of 19th century Irish immigrant laborers who struggled to survive in American industry. They organized labor unions and were not averse to violence, as this “coffin notice,” delivered to three bosses, suggests.

Nevertheless, the American economy grew and grew. By 1914, the small nation once seen as a playground for European empires had now surpassed them all. The United States had become the largest industrial nation in the world.

However, the prosperity of America did not reach everyone. Amid the fabulous wealth of the new economic elite was tremendous poverty. How did some manage to be so successful while others struggled to put food on the table? Americans wrestled with this great question as new attitudes toward wealth began to emerge.

What role did the government play in this trend? Basically, it was pro-business. Congress, the Presidents, and the Courts looked favorably on this new growth. But leadership was generally lacking on the political level. CORRUPTION spread like a plague through the city, state, and national governments. Greedy legislators and “forgettable” Presidents dominated the political scene.

True leadership, for better or for worse, resided among the magnates who dominated the Gilded Age.