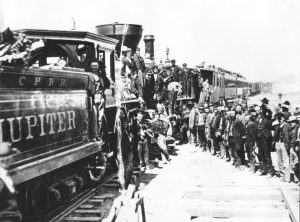 In spite of technological progress, the “Gilded Age” after the Civil War was one of widespread corruption in which “robber barons” were supreme.

After the American Civil War ended in 1865, the United States was still a predominantly rural nation with most people living on farms and in small towns. The country itself was huge, but many of its streets and roads were little more than mud paths, and the first transcontinental railroad was just beginning. There were two positive developments, and one troubling condition, during this period when railroading reached its height. 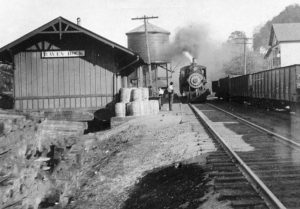 Aided by federal land grants, there was a great deal of railroad construction after the Civil War, especially in the West. Trackage increased from 35,000 miles in 1865 to 254,000 miles in 1916, the eve of America’s entry into World War I. The first transcontinental railroad was finished on May 10, 1869, when the Union Pacific met the Central Pacific at Promontory in Utah Territory. The era was also one of rapid industrialization and technological innovation. Changes for railroading included larger and more powerful locomotives, new types of freight cars, automatic car couplers, the air brake, adoption of the standard gauge (4 feet, 8.5 inches became the distance between rails) by almost all railroads which permitted the interchange of cars between railroads, the creation of four standard time zones across the country allowing trains to run on schedule, the increased use of steel rails, and the bridging of major rivers. By the beginning of the twentieth century, no point in Iowa was more than eight miles from a railroad and by 1916 there were at least 85,000 railroad stations in the United States. 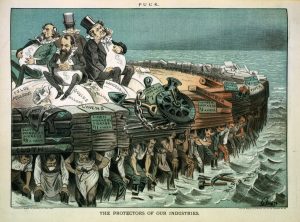 Almost always, golden eras do not escape destructive germs. The “Gilded Age” after the Civil War was one of widespread corruption in which “robber barons” were supreme. Conflicts broke out between major railroads, and larger lines took over small roads. Between the time of the Civil War and 1900 the Pennsylvania Railroad took over more than 600 formerly independent short lines. Rate discrimination (distorted costs for service) was a major issue. Farmers and small businessmen, especially, were vehement critics of rail freight rates. They felt that the railroads gave preferential treatment and rates to large shippers and discriminated against the small consignors. In 1867 farmers organized the National Grange of the Patrons of Husbandry. As a result of this pressure by farmers on state legislatures, some midwestern states passed “Granger” laws regulating railroad freight rates and in 1887 the U.S. Interstate Commerce Commission was created to look into rate structures. 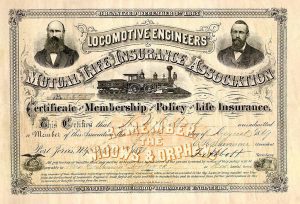 Labor also became restive during the era. The number of railroad workers increased rapidly and this growth coincided with the rise of labor unions in America. The first railroad unions were craft oriented. The Brotherhood of Railway Engineers appeared in 1863 followed by conductors in 1868, firemen in 1873, switchmen in 1877, and brakemen in 1883. However, in 1893 the American Railway Union was established by Eugene Victor Debs. This was an industrial union which welcomed almost all railroad employees. Black railroad workers organized the Colored Railway Trainmen and Locomotive Firemen in 1912. Soon there were four other Black unions that included porters, dining car employees, switchmen, and brakemen. Two large strikes did occur during the era: one in 1877 and the other the famous Pullman Strike in 1894. 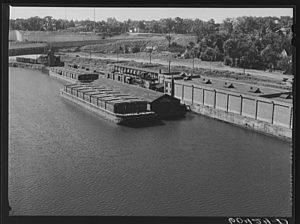 Barges on the Mississippi River, 1930 / Library of Congress, Public Domain

Before World War I, railroads were supreme and had little competition from other forms of transportation. In 1916 railroads carried about 77% of all intercity freight traffic and 98% of all intercity passenger business. Many Americans used trains for their vacation travel and railroads were active in promoting tourism. Also, the rail network reached an all-time high in mileage. But unfettered capitalism was at an end and changes during the Progressive era brought government regulations. After World War I, railroads faced competition in the form of river barges, grain and ore boats on the Great Lakes, pipelines, airplanes, trucks, buses, and automobiles.

Originally published by The University of Iowa Libraries under the terms of a Creative Commons Attribution 4.0 International license.