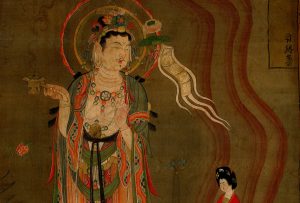 The Guiding (Yinlu) Bodhisattva is my favorite object in the Cave Temples of Dunhuang exhibition, both for its wealth of detail and its vision of a future paradise. In Mahayana Buddhism, the form commonly practiced in East Asia, bodhisattvas are beings who have reached an advanced level of spiritual development and are resolved to become fully awakened—that is, to become Buddhas. Motivated by their deep compassion, they work tirelessly for the enlightenment of all living things. 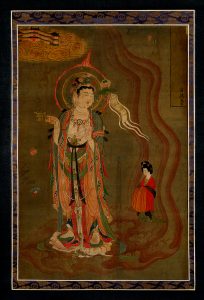 The bodhisattva in this painting, on loan from the British Museum, serves as a guide to an elegant lady of the Tang dynasty (618–907 CE). The woman’s gold and silver combs in her piled-up hair, fashionable makeup, and luxuriously layered silken gown signify her aristocratic status. 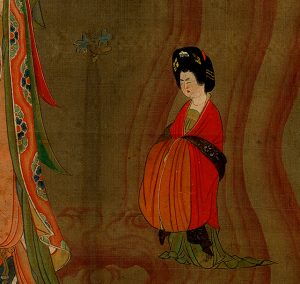 Detail of Guiding (or Yinlu) Bodhisattva showing the lady at lower right. © The Trustees of the British Museum. All rights reserved

The scene depicted does not take place in our world, however, for the lady has died. She proceeds on a trail of streaming red clouds left in the bodhisattva’s wake, closely following her guide as they journey toward the paradise, or Pure Land (in Chinese 淨土, jingtu), which is visible in the distance on the upper-left corner. Because of her good deeds and devotion to Buddhist teachings throughout her lifetime, she will be rewarded with a rebirth in the Pure Land.

The bodhisattva, meanwhile, turns as if to address both the lady and the viewer, drawing us into the space of the painting. He is attired in robes and jewels reminiscent of those worn by Indian aristocrats during the time of the historical Buddha, Siddhartha Gautama, who lived some time between the sixth and fourth centuries B.C.E. Although the artist or artists who created the painting were likely Chinese, this sartorial choice references Buddhism’s origins in India. 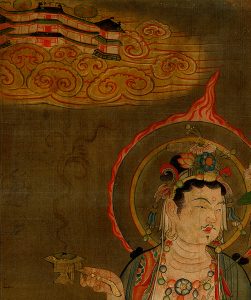 Detail of Guiding (or Yinlu) Bodhisattva showing the Pure Land (at upper left) and face of the bejeweled bodhisattva. He holds an incense burner in his right hand, which emits a plume of elegant smoke. © The Trustees of the British Museum. All rights reserved

Tangible signs of Buddhist practice appear throughout the painting. The white silk banner held by the bodhisattva, for instance, suggests the importance of such banners in worship. These portable paintings were likely carried during rituals, much in the manner shown.

Similarly, the incense burner in the bodhisattva’s right hand smolders and emits a plume of fragrant smoke. These implements may have been used to incorporate scent into ceremonies and processions, thereby heightening the sacred dimension of rituals.

The Guiding Bodhisattva painting thus represents a fascinating fusion of the sensuous and the spiritual, visualizing an amalgam of our earthly experience and the world beyond. 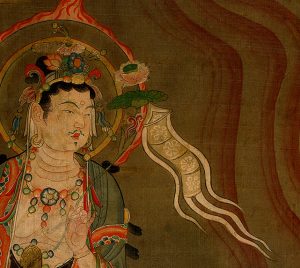 Detail of Guiding (or Yinlu) Bodhisattva showing the bodhisattva carrying a devotional banner. © The Trustees of the British Museum. All rights reserved