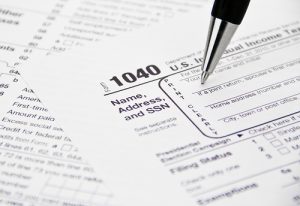 Agriculture—My golf courses receive tax breaks for agricultural use. If a goat poops on your New Jersey property you can be designated a working farm. Hey, we’re real farmers at Trump Golf. We raise greens fees. Ha! Our government is so stupid.

Health savings account deduction—Can we talk about Obamacare? It’s a disaster. It makes me sick. (Hmm, good one!)

Student loan interest deduction—I went to the best college in America. Ask anyone. Go on, ask them. I can wait.

Other taxable income—I don’t know what gets into the heads of these foul-smelling foreign leeches, but visiting dignitaries keep bringing me livestock. Don’t they know I live on Fifth Avenue and not in the freakin’ Congo? My accountant says I have to count the 16 goats and 11 oxen as “tip” income. Me, tip income. Really. Okay, you blood suckers–$14,400 (All I know is that when I visit France as president the gift I’m bringing is soap. With an instruction manual.)

Nontaxable combat pay election—Yeah it’s real and I’m using it because I took heavy incoming from Ted Cruz—Lyin’ Ted, only now he’s more like Cryin’ Ted or Goodbye-in’ Ted. And speaking of combat, which I feel I endured at military school, definitely worse than what most people saw in Nam, I want to remind you I love our vets. And I will take care of our vets, our vets who were never captured, our military school vets. I’m so proud to have made it through military school without getting captured. It was an honor.

Legal fees (to defend the good name of Trump University, the second-best school in the United States, if it were open)–$44,000,000

Books—My Rise and Fall by Benito Mussolini (first half much more enjoyable than second half) and 9-11 Descent Into Tyranny: The New World Order’s Dark Plans to Turn Earth into a Prison Planet by Alex Jones (Jones, who has proven that Michelle Obama is transgender and murdered Joan Rivers to keep her secret, is a master of trenchant understatement)–$38 paid to noted tax-evader and would-be press lord Jeff Bezos, who’s going to fall like Humpty-Dumpty, mark my words.

Cash contributions to charity—Well, you got me. The answer is zippo. A big nothingburger. Way I see it, I give of myself, which is much more valuable than mere money. Lots of people have money, and there are so many billionaires who will give a sackful of cash just to see their name up in big letters on a building (what’s with that?), but who else can give ME? I transcend cash.
Total deductions–$400,014,400

Taxes paid—In a word, no.