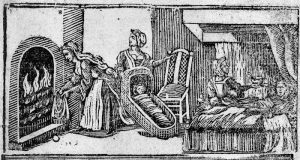 Children and youth in early modern England (1500-1800) were subject to many diseases and physical hardships. From the great epidemic diseases of bubonic plague and smallpox, to more common illnesses such as measles and influenza that still afflict children today, sickness put children and youth at great risk. With no knowledge of bacteria or antibiotics, and surgery performed without anesthesia or even hand washing, there were few remedies for childhood illnesses beyond a nourishing diet and keeping the patient warm. Even surviving an illness could have permanent consequences, for example, scarlet fever left many children blind and deaf, and measles could cause severe scarring and facial bone loss.

One measurement of health in early modern England is revealed in the statistics of the number of deaths kept by church parishes. From these records historians have gleaned that infant mortality (death during the first year of life) was approximately 140 out of 1000 live births. The average mother had 7-8 live births over 15 years. Unidentifiable fevers, and the following list of diseases, killed perhaps 30% of England’s children before the age of 15 – the bloody flux (dysentery), scarlatina (scarlet fever), whooping cough, influenza, smallpox, and pneumonia.

Death from disease was higher in urban than in rural areas. Early modern cities were widely, and often rightly, regarded as deadly environments. They contained large concentrations of population who were often poorly fed and housed. “Crowd diseases” such as typhus, smallpox, and tuberculosis prospered, and bubonic plague epidemics periodically swept through dense urban populations. In 1563, 1603, 1625 and 1665, about one fifth of the population of London died in plague outbreaks. In 1665, one of the deadliest years, 80,000 people died in the capital city. Of this number, historians estimate that at least 45,000 of the victims were under the age of 15.

Besides diseases, accidents were common sources of sickness, disability and death for children and youth. From surveys of coroners’s inquests, drowning in wells and bathtubs, was the most reported accidental death in children under the age of 5. Accidents were also reported connected to the work in which children were engaged beginning around age 8. Children cracked their skulls while fetching water, were trampled by horses while ploughing, or dropped and injured while under the care of siblings. Boys, unless they were from the noblest of families, were expected to serve an apprenticeship. They were often placed in dangerous crafts such as tanning, blacksmithing, or serving on ships, where chemical poisonings, fires, and war injuries were frequent occurrences. There are also accounts in diaries of the period of youthful pranks leading to injury, for example, hiding gunpowder in candles so they blew up when lit.

Throughout this period the primary place where sick children and youth were cared for was in the home, and the principal healers were women – mothers, daughters, wives, and servants. Powder burn remedies —applying a mixture of poultry fat and dung—were commonly included in home receit (remedy/recipe) books kept by the mistress of the household. Women developed considerable professional knowledge after the rise of the printing press in 1500 and the publication of books that had been only in the hands of physicians. Both herbal and chemical medicines were described as suitable for the young in family receit books, such as dried dill in honey for a cough, and iron filings in beer for paleness of the skin.

Children were rarely treated by the small and expensive elite of university-trained physicians to whom adult patients turned for a prognosis and not for a cure. Their remedies were also considered too drastic for children as they largely consisted of rectal purging (laxatives), bloodletting (cutting a vein open with a lancet), and forced vomiting (emetics). These treatments were based on an ancient Greek medical theory that the body was composed of four substances, or humors, created from the digestion of food. The four humors were choler or yellow bile, phlegm or mucus, black bile, and blood, and all had properties of being hot/cold and dry/wet. If the humors were balanced – neither too strong nor too weak – you were healthy. The hot and wet humor of blood and the hot and dry humor of yellow bile were believed to be naturally stronger in the young. Occasionally if these humors were not weakened and released from the body in the form of sweat, tears, urine, feces, or even sneezing, physicians would give children emetics to make them vomit or let blood through “cupping.” Heated glass, bone, or brass cups would be placed upon skin that had been scratched or scarified with a knife. Blood would then flow gently from these wounds due to the creation of a vacuum by the heated cup.

Worried parents consulted surgeons, trained through apprenticeship, for broken limbs, ruptures, and the bladder stone. The latter was caused by the early modern diet, which was rich in gravel. Boys were often operated on for the stone by surgeons in this period with a mortality rate of 30%. The operation was called a lithotomy and took about three to five minutes to perform. No anesthesia was used, instead surgeons relied on the child fainting from pain and being out during the extraction of the stone. Most often, parents turned first to family, friends, and neighbors, for medical advice, even the local blacksmith for a fee would set bones in humans as well as animals.As the specialty of pediatrics (from the Greek for child and healing) had yet to emerge, children were treated as small adults in hospitals and kept in the same wards as adult men and women. Some charitable institutions were opened in the early modern period, for example, the Children’s Hospital in Norwich in 1621, but they tended to be more for children who were abandoned by their parents or orphaned, than for sick youngsters. The largest institution for orphans was the Foundling Hospital in London, opened in 1741. There were also medical discoveries that helped children and youth in this period, most notably, inoculation and vaccination for smallpox.

Starting in the 1960s several scholars have argued that early modern parents tried not to invest too much emotion (or money) in a child until it reached an age where survival was likely. High birth rates, accompanied by high death rates for children under the age of ten years old, meant that family life was fragile and uncertain. Yet the parent-child relationship seems to have been as strong in the early modern period as in any other age, and former ideas of emotional indifference before the eighteenth century are now widely questioned by scholars. Most of the population had a hard struggle for existence but children were cared for as much as conditions would allow. The harrowing grief of mothers and fathers who lost children to disease or accident is indeed all too apparent in diaries and letters of the period.