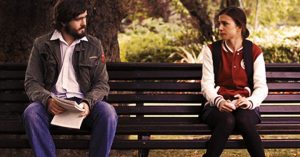 How Strangers Can Have a Lasting Impact on your Health

We’re told from a young age to not talk to strangers. While that’s great advice in many circumstances, it’s not a perfect rule. Sometimes, talking with the occasional stranger can have surprising benefits to your well being. Let’s take a look at some of them.

Depending on where you live and your own disposition, there’s a reasonable chance that you don’t know your neighbors. For example, my apartment building only has five units, and I’ve still only met two of the other people in the building. Never mind my neighborhood as a whole. 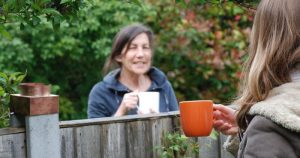 Meeting your neighbor is good for your health

But the social connection with neighbors is beneficial to your health in the long run. Not only do you get obvious benefits like having someone to watch your house when you’re gone, borrow eggs from, or chitchat with over the fence, there’s also possibly a connection with your overall health. The Atlantic explains:

Specifically, according to new research published today from psychologists at the University of Michigan, I’m less likely to die of a heart attack than I would be if I gave in to my more introverted tendencies. Social connection at the neighborhood level has long been known to be associated with good mental health, and some aspects of physical health. But this is the first study to look specifically at neighborhood social cohesion and heart attacks, which hit more than 700,000 Americans every year and cost everyone billions of dollars. 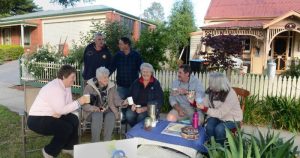 Social connection at the neighborhood level

Going Out of Your Way to Be Friendly

The researchers are quick to point out that while the study measured all kinds of factors, from happiness to general health, the connection to neighbors is still only correlation. There’s no clear indicator that speaking with neighbors causes you to live longer. That said, researcher Eric Kim adds that being friendly with neighbors has some pretty obvious benefits here:

Kim suggests that the cardiac prosperity he documented may come through people checking in on one another and noticing health problems, sharing health-related information, lending money and sharing resources, and “eyes on the street” — sociologist Jane Jacobs’ famous sociological principle that people protect people.

All this is to say that forming some type of bond—even just something of the “wave and a smile” variety—with your neighbors has its benefits. Obviously this isn’t possible in every situation, but if you live in a place where you can, it’s worth a going out of your way to be friendly. 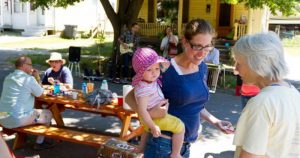 Going out of your way to be friendly

Talking with a Stranger During a Commute Can Improve Your Day

Even with an abundance of entertainment at our fingertips in our smartphones, commutes are still pretty boring on the whole. If you’re stuck on a train or bus for an hour a day, time seems to move pretty slowly. A study published in the Journal of Experimental Psychology shows that people tend to enjoy themselves during their commute a lot more when they chat with strangers.

The study asked a group of people to open up a conversation with a stranger, then report on how they felt afterwards. Those who spoke with a stranger had more positive experiences and tended to enjoy the commute more. 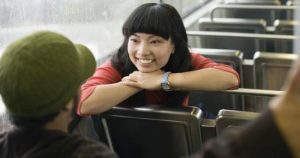 Talking to a stranger can improve your day

The Correlation between Happiness and Talking to Strangers

The New York Times has an idea why happiness and talking with strangers might correlate with each other:

The great thing about strangers is that we tend to put on our happy face when we meet them, reserving our crankier side for the people we know and love. When one of us, Liz, was in graduate school, she noticed that her boyfriend, Benjamin, felt free to act grumpy around her. But if he was forced to interact with a stranger or acquaintance, he would perk right up. Then his own pleasant behavior would often erase his bad mood…

Which essentially suggests that we can often turn a mood around by just acting like we’re not in it, at least for a little while. The Times also points to another study published in Social Psychological & Personality Science that suggests we get similar benefits when we small talk with cashiers and other people we run into throughout the day. 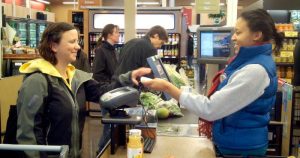 Talking to the cashier can lead to happiness

As someone who works from home and doesn’t have many of these types of conversations, I tend to agree that the random conversation with a barista or checkout clerk has a positive effect on my day as a whole. Of course, it’s easiest to be quiet and not say anything, but a little small talk goes a long way for introverts and extroverts alike.

We tend to surround ourselves with people like ourselves and we get a pretty narrow view of the world. This leads to confirmation bias and a limited understanding of the world as a whole. 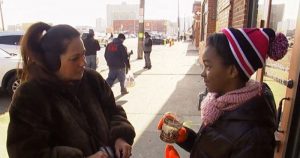 Intel engineer Maria Bezaitis describes the value in seeking out people who aren’t like us in the TED Talk above, but here’s good example of what she’s talking about:

“Don’t talk to strangers” says, “Stay from anyone who’s not familiar to you. Stick with the people you know. Stick with people like you.” How appealing is that? It’s not really what we do, is it, when we’re at our best? When we’re at our best, we reach out to people who are not like us, because when we do that, we learn from people who are not like us.

Beyond the Comfort Zone

When you interact with people you don’t know who aren’t like you, you get the chance to break out of your comfort zone and change your view of reality altogether. This can spark creative ideas, give you new ideas to think about, and plenty more. 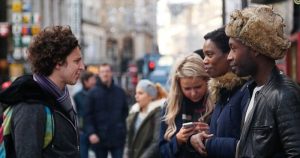 The benefits of going outside your comfort zone

Of course, as with all these types of things, it’s always important to remember boundaries. Don’t spark up a conversation with someone who’s not interested and don’t push it if people don’t reciprocate. Be respectful and if you’re lucky, you might find someone else interested in sparking up a random little conversation s well.