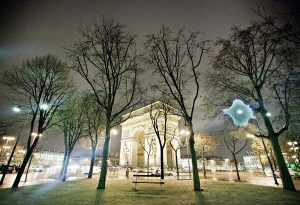 Alexis was in love with life. Fresh out of art school in Fremantle, Australia, she’d picked up a scholarship to study photography under a famous Parisian photographer. Her mother had urged caution but Alexis persisted – and thank goodness! The course – and Paris itself – was everything that she’d dreamed. Her French sponsor found her an apartment in the Latin Quarter, just a stone’s throw from the Place Saint-Michel. Alexis would stroll along the Seine in the evening, up the Champs Elysées to take pictures of the Arc de Triomphe in the flurry of lights.

After two months documenting daily life on the streets of Paris, she had enough material for an exhibition. Alexis felt like she was at the heart of life. Things could go anywhere from here.

One night Alexis was speaking to a friend in Australia. They were reminiscing about their student days, which her friend dearly missed.

‘Do you remember Nietzsche’s idea of the eternal return?’ the friend asked. ‘If I had to choose one time of my life to live out again and again forever, it would be art school’.

Alexis, for her part, was ambivalent about the ‘good old days’. She realized then that if there were a time in her life that she would have again and again, it would be her time in Paris, not Fremantle. The more that she reflected on this, the more her life seemed to come into focus. Looking out the window at the bustling streets, Alexis imagined Nietzsche’s demon coming into her room and making her the offer of Eternal Return. Alexis could hear herself reply, like Nietzsche:

‘Yes. You are a god and I have never heard anything more divine’.