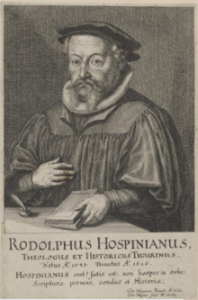 The 1517 book On Gems by Erasmus Stella, a doctor and mythologist from Leipzig, never enjoyed a wide readership—though two hundred years later it was enough in demand to merit a reprint. It takes its reader on a brisk journey through the world of precious stones, their distinguishing features, and their most famous uses. It was first printed together with the passage on stones from Pliny the Elder’s Natural History, on which Stella’s book is largely based.

The passage on smaragdus, or emerald, contains commonplace allusions to famous emerald structures: an emerald spear in a temple to Hercules in Tyre, an emerald Seraphim in a mythological Egyptian labyrinth (p. 17). Stella lingers on one object the longest: an emerald cup in a church in Genoa said to be the one used by Jesus at the Last Supper. We then hear a genealogy of this cup, cobbled together from accounts by medieval romancers: it had first belonged to a set of dinnerware owned by Herod, who had sent it from Galilee to Jerusalem in time for Passover; it was diverted by “divine providence” into the hands of Jesus. Stella, who might well have seen the cup during one of his many travels to Italy, waxes poetic: “Nobody ever saw a more precious cup, a more dignified stone, or more marvelous craftsmanship!” This is not an idle argument: if Jesus at the Last Supper drank from one of the most valuable gems known to the entire West, a gem now residing in an Italian church, controversial things are implied about what kind of man Jesus was, and about which countries could claim the correct worship of him.

Of a different view about the cup’s provenance was Jean Brodeau, a French courtier known, if at all, for his interpretations of Greek poetry. In a chapter of his 1555 Miscellanea (c. 5.19, pp. 193-194) he tried to set straight what he knew about the kinds of vessels used in ancient sacrifices. From Ovid he gathered that the oldest Romans were too poor to use anything other than earthenware or beech. And Porphyrius and Dionysius of Halicarnassus convinced him that even when the wealth of the empire grew, the pious Romans never graduated to fancier equipment. All of this, plus some passages from Apuleius and Cicero, was enough evidence for Brodeau to reject Erasmus Stella’s genealogy of the Genoan cup. Since Jesus lived in the ancient world, his Passover sacrifice must have proceeded by ancient rules, and those called for fictilia, or humble earthenware.

Rudolf Hospinian related this minor scuffle over an Italian cup in his two-part Historia Sacramentaria (1598 and 1602, p. 7). Hospinian adds his own erudition to the mix: according to him, the word for the cup in the Luther translation, Kelch, misleads, since a Kelch is a particular kind of cup. But a poterion, as the Greek New Testament has it, means any old cup, and indeed the Latin word calix should be interpreted the same way. After all, Plautus once wrote the line, “Aulas calicesque confregit”—“He shattered all the pots and cups [of any kind]”—and Erasmus recorded the saying, “Multa cadunt inter calicem supremaque labra”—“Lots of things fall out between the cup and the lips.” Plautus and Erasmus knew the exact weight of each word they used. Ipso facto, Jesus drank from an ordinary cup. 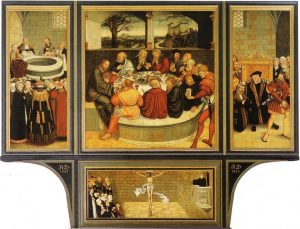 Lucas Cranach the Elder’s Wittenberg Altarpiece with a Last Supper. A close friend of Martin Luther, Cranach here represented the administration of the sacrament directly into the mouth of the participant. Whereas some of Luther’s Protestant opponents suggested that the minister might simply hand over the body of Christ to the congregation for them to break and eat, Luther always maintained the propriety of the old practice.

This Rudolf Hospinian was born as Rudolf Wirt in Fehraltorf, near Zurich, on November 7, 1547. His biographer points out that this made Hospinian only nineteen days younger than the far more famous Justus Lipsius. But “if not in genius, then certainly in piety, theological erudition, and even constancy—for that man wrote and professed many things, rather prettily, de Constantia, but never matched his words with deeds—our Hospinian was leagues ahead of Lipsius.”

If the subjects that historians choose are predetermined by their upbringing, then it is telling that as a child Hospinian watched his father imprisoned and tortured, and his uncle executed, for heresy. He was educated in nearby Zurich, and quickly ascended academic and ecclesiastical ladders. For a time, he taught in Heidelberg. Already as a young man, says his biographer, Hospinian conceived of a way of doing history that would put ecclesiastical truths in an “immovable citadel,” far from the reach of the crowd of everyday pamphleteers: “Our Hospinian believed that the false dye of antiquity could be shaken off [of the arguments of others] if the first origins of their errors, the incunabula themselves, as if tiny fibers placed beneath the sun and so shining through more clearly, could be distinguished from all the rest.”

Each of Hospinian’s works told the story of the Church from its prehistory in paganism and Judaism, through its foundation, up until its perversion in Rome and its pristine restoration in Germany. These themes tie together his book On Temples, his book On the sacred days of the Jews and Gentiles (encompassing also the Greeks, Romans, Turks, and Indians), his Historia Sacramentaria, the magnum opus, and even his works on the history of monasteries and on the strange, new Society of Jesus.

Hospinian makes no secret about which side he is on. The only segment of his work to appear in English describes how the Jesuits train their students to assassinate Protestant kings. The Historia Sacramentaria helped Hospinian come to be regarded as the most qualified Protestant writing ecclesiastical history—which meant, in the first decade of the seventeenth century, the most qualified to refute the history written by Cesare Baronio. Thomas Holland, the Oxford scholar who helped make the King James Bible, tried to recruit Hospinian for just that task. But he was already over sixty, and, as he wrote in a letter to England, “I am alone in this study, having nobody to converse with about such dark and difficult matters, nor am I so outfitted with libraries here as you are there in Oxford, not to mention other things I would need for such a work.” This was for the better: trying to refute Baronio made quick work of Isaac Casaubon, Hospinian’s junior by twelve years, if one accepts the popular account that Casaubon’s body (that is, his bladder) failed under the strain of his work.

Hospinian wrote the Historia Sacramentaria after he had been given a post in Zurich that was, his biographer admits, largely ceremonial, and so admitting of a lot of free time. His reputation hangs on this work more than any other. The first volume narrates the history of the Eucharist from the night of the Last Supper up through the Middle Ages. In the second, published four years after the first, two characters loom the largest: Martin Luther and Ulrich Zwingli. We read, year by year, as they retreat into separate camps and send missiles back and forth.

The history of Eucharist doctrine in the early sixteenth century—the structural center of Hospinian’s diptych—can be a rebarbative subject. It is the story of theologians closing their minds, of talented thinkers expending huge energy on behalf of unbelievably subtle dogmas that seem unworthy of them. But Hospinian’s history is capacious, and it has room for other portraits than this one. Because the chronology of the history places Luther and Zwingli into the unbroken tradition of the early Church, these characters assume the aura and drama of antiquity. The arguments they propose, change, and propose again take on a humanity that other histories of the period do not offer. Jean Brodeau and Erasmus Stella are not the only ones in Hospinian’s history to think with creativity and imagination.

Hospinian humanizes the history of dogma, above all, by including humanists: the personalities whose friendships, rivalries, and passions enliven the march of escalating pamphlets and futile colloquies. He writes piercingly on the symbiosis between Luther and Philip Melanchthon—how the irascible Luther needed the melancholy, slow-thinking Melanchthon to endear him to the authorities. Or, to answer the charge that these theologians lacked self-awareness to a laughable degree, one could supply the passage Hospinian drew from a dinner conversation in Nuremberg in 1526:

That year Philip Melanchthon was in Nuremberg. In those days he was still of the same mind as Martin Luther, on whose behalf nobody fought more strongly than Pirckheimer, a senator in Nuremberg, whose sharpness of mind, force of character, and wide-ranging erudition Melanchthon noticed at every turn of the conversation. And at the same drinking table sat Albrecht Dürer, the artist and learned man… again and again, disputes about the recent Eucharist controversy broke out between Pirckheimer and Dürer. The painter, since he excelled in his mind too, faced off fiercely against Pirckheimer; what the latter proposed, the former rebutted, fully up to the task; Pirckheimer grew heated; indeed he was quick to anger, not to mention his severe case of gout. At last Pirckheimer exploded: “What you’re saying, that couldn’t be painted!” “Ah,” responded Dürer, “but your views can’t be clearly said, or even imagined.” And Dürer went on to recall the stupidity of a certain Doctor Lempius, at Tübingen, who used to attempt, in the course of his lectures, to draw the transsubstantiation on a white canvas.

So goes the Reformation, as it unfolds in Hospinian: heated, yes, but softened somewhat by the ironic humor of those in the very center of it. That is the lesson to draw from the Historia Sacramentaria. To approach the Sacrament, one needs fine distinctions and a nose for metaphysics; to approach the history, one needs people and their stories.