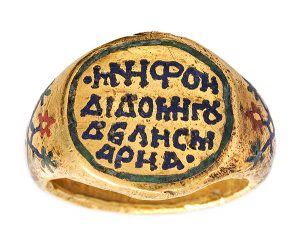 Engagement Ring with a Greek Inscription, about A.D. 1175–1300. Gold and enamel, 1 3/16 in. diam. Image courtesy of the National Archaeological Museum, Athens

Separated by centuries, two women had the privilege of handling the same Byzantine engagement ring.

At different moments in its history, two wealthy women from prominent families held this ring: one as a newly engaged woman, the other as a collector of jewelry. In very different ways, this ring reveals aspects of their lives.

In the Byzantine Empire, as today, rings exchanged during the marriage rite witnessed a couple’s legitimate union. Three rings were associated with this rite of passage: one ring for engagement and two for marriage. The bezels were decorated with images and words of symbolic importance or inscribed with the names of the couple. In Greek Orthodox custom, following the Byzantine tradition, the ring is worn on the right, or “correct” hand, related to the acceptability of the marriage through an ancient rite of the clasping of the right hands.

Four lines on are inscribed on the ring’s bezel. Translated, they read:

“I, Goudeles, give this engagement ring to Maria.”

The band’s thick sides are decorated with green, blue, red, and white enamel flowers and spirals. The flowers and scrollwork recall the text of the Greek Orthodox marriage service, which compares the bride to a fruitful vine, expressing the hope for fertility. The intricate decoration and heavy weight of the gold (17.3 grams) indicate that Maria and Goudeles were members of a wealthy, and likely prominent, Byzantine family. 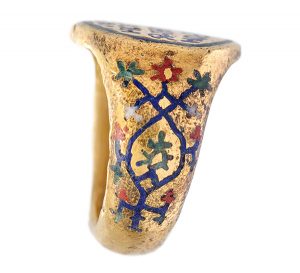 Side view of the Byzantine engagement ring showing its elaborate enamel inlays. Image courtesy of the National Archaeological Museum, Athens

The Goudeles family is well documented in Byzantine material and written sources. Lead seals preserved from medieval correspondence from around the year 1050 are impressed with the name of Leon Goudeles, protospatharios and strategos. Another member of the family, Basileios Tzykandeles Goudeles, was a prominent military figure in the court of the Byzantine Emperor Manuel Komnenos (1143–1180).

Members of the Goudeles family are mentioned in various written sources through the end of the Byzantine Empire. In the waning years of imperial rule and in the years following the fall of Constantinople, they were involved in maritime commerce, especially with Italy. Like many wealthy families, the Goudelai (plural) also made substantial contributions to the Church, hoping to secure spiritual insurance in a time of crisis. Letters of the mid fifteenth century preserved in both the Vatican Archive and the State Archive in Genoa, Italy, record George Goudeles’s support of the convent of St. Nicholas in Constantinople.

Dated to the late 12th or early 13th century and recording the names of a Goudeles and his fiancée Maria, the ring in Heaven and Earth likely belonged to one of the earlier members of this notable family. The ring provides material evidence for the family’s wealth and activity, and also may reveal a moment of tenderness, as one of its members gave this ring to his prospective bride. Elevated by the golden band, Maria became a member of this illustrious family.

Seven hundred years after it was made, the ring became the treasured property of another Greek woman, collector Eleni Stathatos. 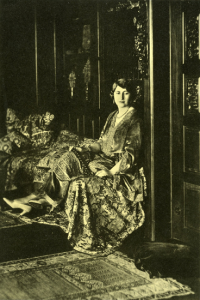 Eleni Stathatos, born in 1887, was the daughter of K. Konstantinides, a merchant, landowner, and member of the cultured and cosmopolitan Greek community of Alexandria, Egypt. In 1911, she married Antonios Stathatos, a wealthy businessman with connections to the Greek royal court.

As a girl, Stathatos had already expressed an interest in archaeology, which manifested in her lifelong passion for collecting items from the past. She died in Athens in 1982 and bequeathed her entire collection of 971 icons, jewelry, embroideries, and archaeological finds to the Greek state. Her collection was housed in the Stathatos Mansion in Athens until she divided it among the Benaki Museum, the Gennadius Library, and the National Archaeological Museum in Athens.

As a female collector, Stathatos was able to create her own personal history through the negotiation of notions of gender, nation, class, and identity. In interviews, she spoke about her beliefs in the “secret life of objects” and how her love for art of the past was not accidental. She had an intimate connection with the works she collected. In her own words, “The more you know objects, the more you discover in them hidden details.”

According to recent scholars, her collection displayed the expected, gendered approach of her time. Like many female collectors, she was interested in jewelry and decorative arts and displayed them in a private space, arranging them according to her own exquisite taste. The engagement ring and other pieces of ancient and medieval jewelry were displayed in the Stathatos Mansion in a large closet that had been converted into a treasury for their display. These items were intensely personal. According to the scholar Pierre Amandry, who published an early catalogue of her collection, “When she takes an object out of the case, her glance caresses it, along with her fingers.”

The broad range of historical periods, regions, and categories that the objects embody reflected the inclusive yet eclectic taste of a woman who was both Western European and Greek. After her husband’s death in 1957, Stathatos decided to donate her great collection to the Hellenic Republic. The director of the National Archaeological Museum allowed Stathatos to arrange and exhibit the collection according to personal taste in display cases that she selected and funded. Stathatos noted: “I felt Time falling heavy upon me…as we age, we should take care of our business. [The collection] had to return to the country.” In honor of her preservation of works of national heritage and her generous donation, Eleni Stathatos was named a Great Benefactor of the Greek Nation and has rightfully earned her place in a male-dominated field.

The engagement ring on display from her collection expresses the parallel between two prominent families with abundant heritage and culture, enormous wealth, and great generosity.