In 1473, Alexander Hardynge, who had finished his bachelor’s degree at Oxford nearly two years previous, borrowed money through an educational loan service. The loan came with a one year repayment deadline.

With some of that money, he rented a room at Exeter College and offered tutoring services to college students. He soon repaid that loan. In 1475, Hardynge took out a second loan – again, in part to rent teaching space.

Then, in 1478, he was appointed as a subdeacon, a post two orders lower than a priest, likely in Durham, a city in the north of England. From all evidence, it seems that he promptly packed his robes and abandoned his teaching gig. There is also nothing to suggest that he gave a single penny to his lenders.

For students today, Hardynge’s story would be too good to be true. Not only did he get his bachelor’s degree without incurring debt, but also, he did not have to repay the money he borrowed.

Prompted by my own anxiety about educational debt, an anxiety that intensified several years ago with the birth of my own prospective college students, I have been researching the long history of educational loans in order to get a better context for the current student debt crisis.

With student loan growth rates spiraling out of control, it behooves us to think through the ways other time periods and cultures have monetized, funded or not funded student labor.

The history of student loans starts with the establishment of institutions of higher learning in medieval Europe from the late 11th century.

The University of Bologna, considered the first official university, was quickly followed by the University of Paris, Oxford University and Cambridge University. All of these places offered degrees to young men, training them for positions in the Catholic Church and, later, in government. 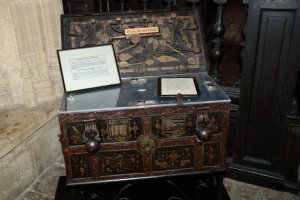 At first, scholars who needed money did not differ from other borrowers: everyone took loans from the same lenders. But in 1240, Robert Grosseteste, the bishop of Lincoln, used Oxford University money to launch the first documented student loan system. He named it St. Frideswide’s Chest.

St. Frideswide’s Chest was literally a chest. Bound by two different locks, with each key held by a different college magister, or faculty member, it resided at St. Frideswide’s Priory, a religious house in central Oxford, amid the city’s colleges, academic halls and student apartments.

To get a loan from St. Frideswide’s, a borrower had to be a scholar of modest means – and likely took an oath for proving so. He also had to have something of value to deposit in the chest as collateral. From the pledge notes I’ve seen in roughly 100 manuscripts and descriptions of manuscripts, it’s clear that scholars hocked everything from silver spoons to gold plates.

But the most commonly collateralized items were books. Not fancy, illuminated books. Just textbooks. In the late Middle Ages, this included works by Aristotle, the Bible, law codes and medical tracts. Here’s a link to a manuscript at Balliol College that was used as collateral. The lines on the final page record two loans taken out by a scholar, Thomas Chace, in 1423 and 1424. The Merton College manuscript (pictured) contains eight pledge notes from the same century. 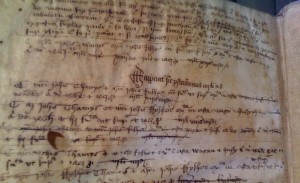 These were not textbooks as we know them today. They were manuscripts made from animal skin and completed through hours of scribal labor. They fetched large sums. As in modern times, medieval textbooks too derived part of their value through the educational market.

Today, for example, the Encyclopedia of International Media and Communications (US$305 secondhand) commands a high price because faculty use it to teach and students use it to research in one of the fastest-growing majors. Back then, it was Peter Lombard’s Sentences, a staple of the Oxford curriculum and also the book Hardynge used for collateral. 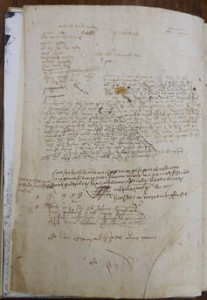 Sadly, the pledge note in Hardynge’s text, as recorded in the British Library’s on-line description of its manuscripts, does not include the loan amount. But on another leaf of the manuscript one can see a scrawled “precii xl.s.” or “price 40 shillings.”

Hardynge almost surely did not get a loan of this amount. As noted by other scholars who have written extensively on medieval loans and debt collection, the value of the collateral far outweighed the actual amount of the loan. But given that a student in the early 15th century could pay for an entire series of lectures for six shillings, even a loan of 20 shillings, or half the book’s value, would have represented a hefty sum.

This system might sound like a pawn shop crossed with a secondhand book store. But the use of collateral meant scholars did not always feel the need to repay their loans. Once employed, they could walk away from their debts, just as Hardynge did. If that happened, the chest manager would then put the collateral back into the market. For many borrowers like Hardynge, who had finished his education, buying back his book was simply not worth it. Now employed, he had little need for his copy of Peter Lombard’s Sentences.

By the end of the 14th century, roughly 20 more loan chests had appeared in Oxford. The chests had also moved in 1320 from St. Frideswide’s Priory to the university’s congregation house, and they held the equivalent of millions of today’s dollars. Most often the money came from wealthy patrons who either wanted to support scholars or liked the thought of having their name associated with a chest.

This later impulse seems to have been the case with some of the later chests, which were funded by professionals rather than the nobility. Thus, while King Edward I’s consort, Queen Eleanor of Castile, founded a chest in 1293, the Guildford Chest (1314) and the Robury Chest (1321) were founded, respectively, by a judge and an attorney-turned-judge.

These later chests opened borrowing to all scholars, not just poor students. In short, the chests now targeted the Alexander Hardynges of Oxford. Hardynge was not poor. He probably funded his education through parental handouts and part-time work, or received on support from a wealthy patron. But clearly by several years after his graduation, he needed money to stay afloat.

For 300 years, the loan chest system thrived. Then, one evening in early March of 1544, two men – Robert Raunce and John Stanshaw – armed with an “iron bar and hammer,” broke into the congregation house and smashed all of the loan chests. Although Raunce and Stanshaw were eventually tried and sentenced, their burglary still managed to wipe out much of the chests’ wealth. 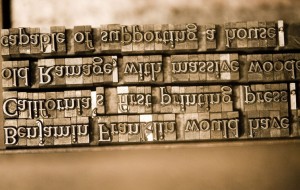 The arrival of the printing press changed the value of a book. Thomas Hawk

Yet even before this, the loan system had started to decline. Although the arrival of the printing press in the late 15th century didn’t have an immediate effect on manuscript production, it would eventually make books cheap and thus no longer worth collateralizing. Even in the chests’ final century of use, the use of gold plate and jewelry was increasing and by 1500 had surpassed the use of books.

Around the same time, bankers began to make loans on the premise of future returns rather than in exchange for real property. The shift toward anticipated future earnings soon came with the England’s 1624 legalization of interest-bearing loans, which pushed even more people into this model of lending.

Student loans arrived in the United States in the mid-19th century. Like the medieval loan chests at Oxford, these loans started through a singular university, in this case Harvard, which administered them. 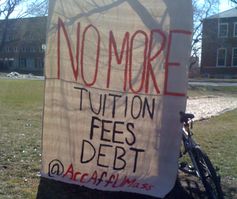 This localized system changed in the mid-20th century with the creation by the Department of Education in 1965 of federally guaranteed student loans made by private lenders and available to students across the country.

Students were once again put into a special category. But in this case, this meant they could now collateralize their estimated future incomes (without even knowing what those incomes might be) in order to obtain a degree.

For a long time and for many students (this writer included), this model of credit worked. Loans opened up college to many people, allowing them to pursue a career path otherwise unavailable. But now that we’ve entered the age of six-figure student loans, this freedom seems more like a virtual debtors’ prison than a chance to economic mobility.

I would never advocate a return to the Middle Ages. Yet as we consider the current morass of educational debt, we need to think harder about historical precedent.

True, medieval universities excluded many groups – religious minorities, feudal villeins (a commoner legally tied to a feudal lord in the Middle Ages) and women were barred from entry. Yet poor young men with talent had a chance. Fees were not high. Patrons helped out. And if one needed money, one might be able to pledge a book – not a future.