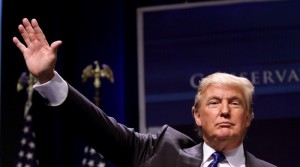 In a recent interview with CNN’s Dana Bash, who asked how he would fund various programs, Donald Trump said:

The United States has treaties with allies around the world.  We agree to enter into protective statuses as necessary when threatened.  It so happens we have the strongest military in the world and don’t really need reciprocation, though they do join us in coalitions – such as in Afghanistan, Iraq, and in the fight against ISIS.  This is just what allies do with and for each other.

Adjective:  (of a person or their behavior) primarily concerned with making money at the expense of ethics.

Noun:  a professional soldier hired to serve in a foreign army.

That is precisely what Mr. Trump suggests making of our soldiers.  No longer does he wish to enter into international treaties with allies – he wants to CHARGE them instead.  He wants to take advantage of our position as the strongest military force in the world to make money off our allies instead of being, well, allies.

He will turn our military into a professional force hired to serve for allies in a protective capacity, concerned with making money at the expense of ethics.

Welcome to the dictionary, Mr. Trump.