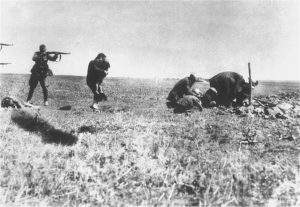 The Holocaust is organically and integrally connected to the attempt to conquer Ukraine.

The Holocaust in Ukraine took place in Reichskommissariat Ukraine during the occupation of the Soviet Ukraine by Nazi Germany in World War II.[5] Between 1941 and 1944 more than a million Jews living in Ukrainian SSR were murdered as part of Generalplan Ost and the Final Solution extermination policies.

The perpetrators included various local Nazi collaborators, including the Organization of Ukrainian Nationalists.[1][2][3][4]

A map of the Holocaust in Ukraine / Wikimedia Commons

One of Hitler’s ambitions at the start of the war was to exterminate, expel, or enslave most or all Slavs from their native lands so as to make living space for German settlers.[7] This plan of genocide[8] was to be carried into effect gradually over a period of 25–30 years.[9] 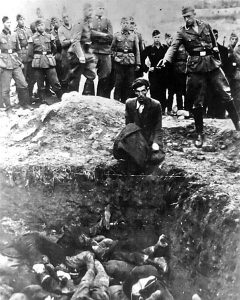 A member of Einsatzgruppe D is about to shoot a man sitting by a mass grave in Vinnytsia, Ukraine in 1942. Present in the background are members of the German Army, the German Labor Service, and the Hitler Youth.[10] The back of the photograph is inscribed “The last Jew in Vinnitsa” / Wikimedia Commons

Total civilian losses during the war and German occupation in Ukraine are estimated at four million, including up to a million Jews who were murdered by the Einsatzgruppen and local Nazi collaborators. Einsatzgruppe C (SS-Gruppenführer Dr. Otto Rasch) was assigned to north and central Ukraine, and Einsatzgruppe D (SS-Gruppenführer Dr. Otto Ohlendorf) to Moldavia, south Ukraine, the Crimea, and, during 1942, the north Caucasus. According to Ohlendorf at his trial, “the Einsatzgruppen had the mission to protect the rear of the troops by killing the Jews, Romani, Communist functionaries, active Communists, uncooperative slavs, and all persons who would endanger the security.”The United States Holocaust Memorial Museum tells the story of one survivor of the Einsatzgruppen in Piryatin, Ukraine, when they killed 1,600 Jews on April 6, 1942, the second day of Passover:

I saw them do the killing. At 5:00 p.m. they gave the command, “Fill in the pits.” Screams and groans were coming from the pits. Suddenly I saw my neighbor Ruderman rise from under the soil … His eyes were bloody and he was screaming: “Finish me off!” … A murdered woman lay at my feet. A boy of five years crawled out from under her body and began to scream desperately. “Mommy!” That was all I saw, since I fell unconscious.[10] 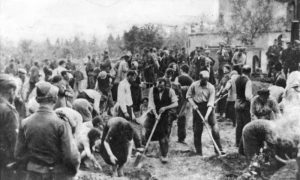 From September 16–30, 1941 the Nikolaev massacre in and around the city of Mykolaiv resulted in the deaths of 35,782 Soviet citizens, most of whom were Jews, as was reported to Hitler.[11]

Jews of the city of Kiev and vicinity! On Monday, September 29, you are to appear by 08:00 a.m. with your possessions, money, documents, valuables, and warm clothing at Dorogozhitskaya Street, next to the Jewish cemetery. Failure to appear is punishable by death.

The most notorious massacre of Jews in Ukraine was at the Babi Yar ravine outside Kiev, where 33,771 Jews were killed in a single operation on September 29–30, 1941. (An amalgamation of 100,000 to 150,000 Ukrainian and other Soviet citizens were also killed in the following weeks). The mass killing of Jews in Kiev was decided on by the military governor Major-General Friedrich Eberhardt, the Police Commander for Army Group South (SS-Obergruppenführer Friedrich Jeckeln) and the Einsatzgruppe C Commander Otto Rasch. It was carried out by a mixture of SS, SD and Security Police, assisted by the Ukrainian Auxiliary Police. On the Monday, the Jews of Kiev gathered by the cemetery, expecting to be loaded onto trains. The crowd was large enough that most of the men, women, and children could not have known what was happening until it was too late: by the time they heard the machine-gun fire, there was no chance to escape. All were driven down a corridor of soldiers, in groups of ten, and then shot. A truck driver described the scene:

[O]ne after the other, they had to remove their luggage, then their coats, shoes, and overgarments and also underwear … Once undressed, they were led into the ravine which was about 150 meters long and 30 meters wide and a good 15 meters deep … When they reached the bottom of the ravine they were seized by members of the Schutzmannschaft and made to lie down on top of Jews who had already been shot … The corpses were literally in layers. A police marksman came along and shot each Jew in the neck with a submachine gun … I saw these marksmen stand on layers of corpses and shoot one after the other … The marksman would walk across the bodies of the executed Jews to the next Jew, who had meanwhile lain down, and shoot him.[12]

A number of Ukrainians had collaborated: According to German historian Dieter Pohl [de], around 100,000 joined police units that provided key assistance to the Nazis. Many others staffed the local bureaucracies or lent a helping hand during mass shootings of Jews. Ukrainians, such as the infamous Ivan the Terrible of Treblinka, were also among the guards who manned the German Nazi death camps.[13]

According to The Simon Wiesenthal Center (in January 2011) “Ukraine has, to the best of our knowledge, never conducted a single investigation of a local Nazi war criminal, let alone prosecuted a Holocaust perpetrator.”[14]

According to the Israeli Holocaust historian Yitzhak Arad, “In January 1942 a company of Tatar volunteers was established in Simferopol under the command of Einsatzgruppe 11. This company participated in anti-Jewish manhunts and murder actions in the rural regions.”[15] 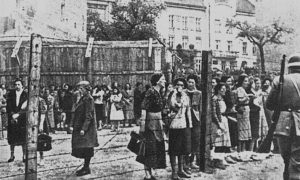 Until the fall of the Soviet Union, it was believed that about 900,000 Jews were murdered as part of the Holocaust in Ukraine. This is the estimate found in such respected works as The Destruction of the European Jews by Raul Hillberg. In the late 1990s, access to Soviet archives increased the estimates of the prewar population of Jews and as a result, the estimates of the death toll have been increasing. In the 1990s, Dieter Pohl estimated 1.2 million Jews murdered, and more recent estimates have been up to 1.6 million. Some of those Jews added to the death toll attempted to find refuge in the forest, but were killed later on by Home Army, the Ukrainian Insurgent Army, or other partisan groups during the German retreat. According to American historian Wendy Lower, “there were many perpetrators, albeit with different political agendas, who killed Jews and suppressed this history”.[17]