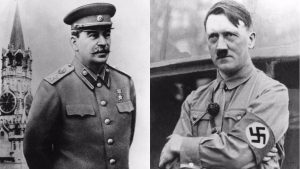 In August 1939 Joseph Stalin made a mistake, one that deeply affected not only the Soviet Union but also the rest of the world.

In August 1939 Joseph Stalin made a mistake, one that deeply affected not only the Soviet Union but also the rest of the world. The mistake was that on August 23, 1939, the dictator of the communist empire signed a secret protocol with Adolf Hitler. The document was a clear blueprint for a political alliance between Russia and Germany. It included economic exchanges, cultural exchanges, and even military cooperation. Effectively, this agreement laid the basis for the two nations to divide eastern Europe between them. One provision stated that should Germany invade Poland, Stalin would order the now-infamous “stab in the back.” Russia promised to also invade the already prostrate nation from the east and occupy a large part of it.

There was a very good argument to be made that it was to Russia’s advantage. Their army had been crippled by purges and the failures of a botched invasion of Finland. But by signing this pact with Germany, Joseph Stalin also guaranteed the start of World War II. One of the Nazis’ greatest fears was a two-front war. This had proved disastrous for Germany only a few decades before in World War I. This pact guaranteed that would not happen again. Ironically, they were right, and when Hitler chose to disregard the agreement two years later, it began a series of events that resulted in the total defeat of the Third Reich. The pact removed the last real check on German aggression. Britain and France maintained a continuing attitude of appeasement. America’s stand was one of adamant neutrality that even a concerned Franklin Roosevelt could not change. With Russia neutralized, there simply was no one else strong enough to stop the Nazis.

Stalin had many reasons to think this protocol was a good idea. One was that it left his own occupation of Ukraine, Belarus, the Baltic states, and the eastern part of Russia’s old nemesis, Poland, unchallenged. Another appeal was that it played to Stalin’s need to create a buffer zone that reached about 200 kilometers from the actual Russian border. Perhaps most important, Adolf Hitler had been working hard on the Western democracies to join with him in a crusade against the communists. Stalin had a real fear Hitler might succeed. It had been barely twenty years since most of the Western nations and Japan had sent military units into Russia to support the White Russian, anti-Bolshevik armies. Finally, it appears from the now-available records that Stalin actually believed that any war between Germany and Russia could be avoided. This was, in retrospect, wishful thinking, but that belief not only caused him to sign the protocol but also led to orders that crippled the Russian army when the Wehrmacht invaded two years later. So desperately did Stalin hold on to the belief that Hitler would obey the terms of this pact that German troops passed trains of raw materials from Russia still delivering resources as agreed, hours after Operation Barbarossa had begun in 1941. Leopold Unger, a Polish-Belgian author and historian, is unquestionably correct in calling the 1939 protocol the “most cynical operation of the World War II, and the founding document of the post-war Soviet empire in Europe.” This agreement also effectively ended discussions on another pact, the Tripartite Pact between Britain, France, and Russia, which was also designed to ensure peace and hold Hitler at bay. So, effectively, Stalin decided to believe Adolf Hitler and Germany—which had attacked Russia in World War I—instead of trusting his allies from that same war.

In the lens of history, there are fewer more obvious, world-changing mistakes than Joseph Stalin cutting a deal with the devil. Perhaps the only greater mistake Stalin made was believing that the agreement was anything but Realpolitik: something cynically done by Hitler only for passing expediency. So while the Nazi- Soviet pact of 1939 gave Russia the illusion of security, in reality it gave the Nazis a green light to attack Poland and then France. It was a major factor in the start of World War II. Believing the assurances of peace with Russia, which Hitler betrayed the first chance he got, was more than just a mistake. It sold out not only Poland and western Europe but, in the end, was even more costly to Russia itself. Almost exactly two years after signing the nonaggression and cooperation pact, Hitler attacked Russia. Stalin was so dismayed that he had a virtual breakdown and was ineffective for the crucial first days of the invasion. The result of his mistake was the loss of millions of Russian lives, half the Russian population suffering from Nazi occupation, and the destruction of much of the manufacturing base of the Soviet Union. It was a terrible price for a short-term agreement. Rarely has anyone’s judgment proven so wrong.