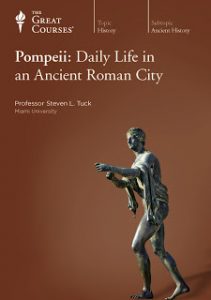 Recently, I watched a fascinating lecture by Professor Steven Tuck of Miami University on the interpretation of imagery found in the House of the Tragic Poet in Pompeii in his course “Pompeii: Daily Life in an Ancient Roman City“, recorded for The Great Courses.   He describes the scenes of mythical and literary events as sharing an overall theme of love with the exception of a panel depicting the sacrifice of Iphigenia in a vestibule of the peristyle adjacent to the triclinium.  He also explained that this jumble of images was possibly the target of Petronius, Nero’s official “arbiter of taste”. In his “Satyricon” written during this period, Petronius derided such, as he perceived it, tasteless displays proffered up by the nouveau riche.

When Dr. Tuck described the images I found myself searching for more meaning in their inclusion in a family home, too, other than just ostentation. So I searched the web and stumbled across an article by Bettina Bergmann entitled “The Roman House As Memory Theater“.  Bergmann expresses her opinion that, what on the surface may appear to some to be unrelated lavish literary and mythical depictions, may have actually been carefully chosen scenes to enable visitors to the house, as well as its residents, to relate contemporary events to the ancient epic past as a means to both appreciate and understand the culture they all shared.  I hope I understood her correctly. 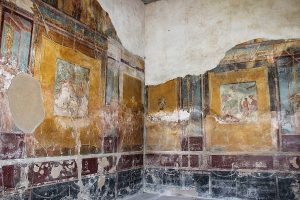 Remains of frescoes depicting mythological scenes in the triclinium
(dining room) in the House of the Tragic Poet in Pompeii.  Image courtesy
of Wikimedia Commons.

She thinks the choice of decor served as memory tools, called the method of loci, or the “Roman Room” technique, to facilitate intelligent discourse as described by Cicero in his thesis on oratory, “De Oratore”.  The method of loci, also known as the memory palace or mind palace technique, is a mnemonic device adopted by ancient Greek and Roman rhetoricians that relies on memorized spatial relationships to establish, order and recollect memorized content. 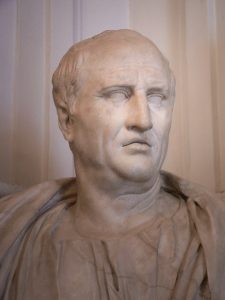 Portrait bust of the famous Roman orator Cicero.
Photographed at the Capitoline Museum by
Mary Harrsch © 2005

“In this technique the subject memorizes the layout of some building, or the arrangement of shops on a street, or any geographical entity which is composed of a number of discrete loci. When desiring to remember a set of items the subject literally ‘walks’ through these loci and commits an item to each one by forming an image between the item and any distinguishing feature of that locus. Retrieval of items is achieved by ‘walking’ through the loci, allowing the latter to activate the desired items. The efficacy of this technique has been well established (Ross and Lawrence 1968, Crovitz 1969, 1971, Briggs, Hawkins and Crovitz 1970, Lea 1975), as is the minimal interference seen with its use.” – John O’Keefe and Lynn Nadel, The Hippocampus as a Cognitive Map

Although I agree that the House of the Tragic Poet could have served wonderfully well as a “memory theater”, I think each room’s decor would not only provide a distinctive loci, but remind the visitor of an important aspect of human relationship either within the family or the society as a whole.  Dr. Tuck focused on an underlying theme of love and it is certainly an underlying thread in many of the images.   But depictions of power of those in authority over socially subordinate individuals and the consequences of defying authority is also present and in the strictly ordered society of late Republican and early Imperial Rome, this message to visiting clients would not be overlooked.

As a client enters the atrium, to the right he would see a panel depicting Zeus and Hera on Mount Ida. 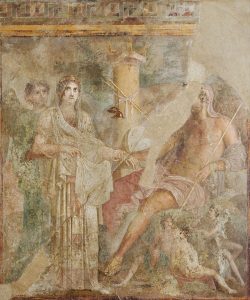 Fresco depicting the wedding of Zeus and Hera in the atrium
of the House of the Tragic Poet in Pompeii.  Image courtesy of
Wikimedia Commons.

“Zeus persuades his modest bride to lift her veil and reveal her face, which she turns suggestively to the viewer.  This canonical scheme, seen in a metope from Hera’s 5th century BCE Temple at Selinus, celebrates that liminal passage in a woman’s life from invisibility to exposure, virginity to marriage.” – Bettina Bergmann, The Roman House as Memory Theater

Next, the client would see a painting of Achilles sitting before his tent after he reluctantly releases his concubine, Briseis, to Patroclus, who leads her away to the tent of Agamemnon.  Briseis, too, turns her glance back toward the viewer as she holds up her veil to dry a tear.  To a client, this could remind him that sacrifices may have to be made but the patron has the right to expect this. 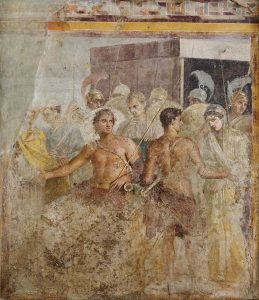 Fresco depicting The Greek hero Achilles surrounding his captive
prize Briseis to Patroclus who prepares to take her to King Agamemnon.
Image from the House of the Tragic Poet courtesy of Wikimedia Commons.

The third panel depicts Helen, also unveiled, boarding a ship that will take her from her homeland to Troy where strife and heartache await.  Again a client is reminded of the degree of sacrifice and obedience to which a patron is entitled.

Fresco depicting Helen boarding a ship
for Troy in the atrium of the House of
the Tragic Poet in Pompeii.  Image
courtesy of Wikimedia Commons.

Once the client is called into the tablinum they find a scene of Alcestis hearing the news that her husband Admetus may be spared death if another dies in his place.  In the myth, the wife offers herself instead.  Obviously, a client-patron relationship in this period of Rome is to be taken very seriously and a client may need to be willing to throw himself under the chariot, so to speak, to save his patron. 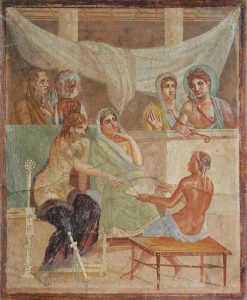 Fresco of Alcestis hearing the news that her husband Admetus
will be spared if someone (her) dies in his place from the
House of the Tragic Poet in Pompeii.  Image courtesy of
Wikimedia Commons.

The famous mosaic of  actors preparing to present a tragic satyr play stares up at the client from the floor.  The elderly choragos could again represent the patron who is instructing a flute player and two actors dressed in goatskin loincloths, representatives of the clients who are presenting themselves for their daily assignment.  I also think of this mosaic as reminding clients that they all have their parts to play (Even though Shakespeare was born many centuries later!) 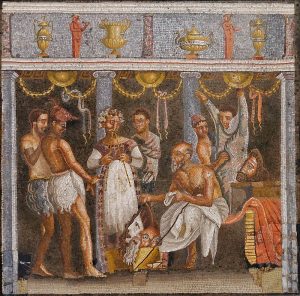 Mosaic depicting the choregos and tragic actors from the tablinum in the
House of the Tragic Poet in Pompeii.  Image courtesy of Wikimedia Commons.

Of course all of my speculation is based on the viewpoint of a client visiting the patron which occurred every morning during the salutatio. But the underlying messages of respect for authority, obedience and sacrifice would apply even to the patron’s visiting friends and peers since all would be considered in service to Rome. In her treatise, Bergmann offers all kinds of alternate suggestions based on image groupings from different angles that you may find interesting as well.

One image that gave Dr. Tuck pause to explain its connections to all the others from a viewpoint of love as the predominant theme is the image depicting the sacrifice of Iphigenia that adorns a small space of the peristyle diagonally across from the lararium.  I think it is actually the ultimate expression of love in the entire house, though.  In a Roman world of patron and client relationships and the exercising the role of pater familias, who has the power of life and death even over family members, I think this image served to remind the patron each morning after he sacrificed to his ancestors and household gods and turned to enter the tablinum, not to allow the heady intoxication of power and ambition lead him to sacrifice the most important people in his life or there would be dire consequences (like there was for Agamemnon!) – serving the purpose very much like the slave who rides with the triumphator in the triumphal chariot whispering, “remember, thou art mortal”. 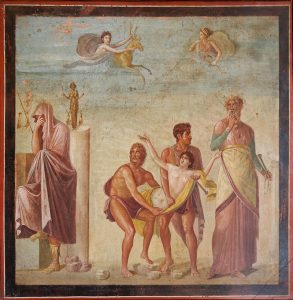 The sacrifice of Iphigenia found in a vestibule of the peristyle adjacent to
the triclinium.  I think this image would have reminded the patron of the
dire consequences of placing ambition above love for his familias.
Image courtesy of Wikimedia Commons.

I highly recommend that you read Bettina Bergmann’s paper as it is not only interesting but has beautiful illustrations of the various reconstructed spaces within the House of the Tragic Poet.  I also recommend Dr. Steven Tuck’s lecture series “Pompeii: Daily Life in an Ancient Roman City” available through The Great Courses. 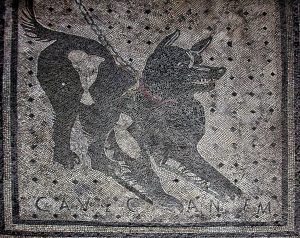 The famous Cave Canem Mosaic at the entrance to the House of the Tragic
Poet.  Image courtesy of Wikimedia Commons. 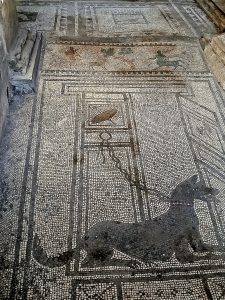 The House of the Tragic Poet wasn’t the only one with a
“Cave Canem” mosaic in the entryway.  Here’s another
one I found in Pompeii in 2005.  Photograph by
Mary Harrsch © 2005

One last note:  Dr. Tuck said Petronius made particular fun of the fact that the nouveau riche house in the Satyricon had a “Beware of Dog” mosaic at its entrance just like the House of the Tragic Poet. Petronius pointed out that it was totally ridiculous because all Roman houses have their door opened to the public during the day with, theoretically, all comers welcome.  I think the mosaic served as a subtle and very practical reminder to those who might be contemplating entering the home to do harm that, although the door is open, the house is guarded, whether literally or metaphorically – sort of the modern equivalent of posting a “Beware of Dog” sign even when you don’t own one.  It makes perfect sense to me but, of course, I have never been designated as someone’s arbiter of taste!