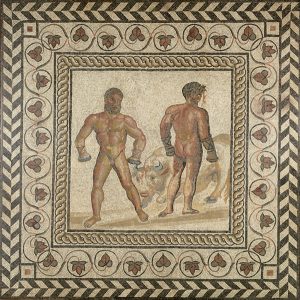 At first glance, ancient Roman mosaics and Instagram photos don’t seem to have much in common. But like Instagram users, ancient Roman artists had to tell an entire story in a square frame. Their solution was to selectively explore the tale using key elements, like objects, characters, or symbols, that would be instantaneously recognizable to the knowledgeable viewer in the same way modern-day memes spark instant understanding for savvy social media users.

Case in point: the Mosaic Floor with Combat Between Dares and Entellus featured in the exhibition Roman Mosaics across the Empire at the Getty Villa (where instagramming is welcome, hashtag #RomanMosaics). It depicts two men wearing nothing but boxing gloves—one bleeding from the head—with a bull in the background, also bleeding from the head. What’s going on here?

Unless you’ve recently brushed up on your Virgil, this image is probably a bit mystifying. But a well-informed ancient viewer would have recognized the bull, boxing gloves, and the postures of the athletes (traditionally, they competed nude) as indicating the conclusion of a boxing match in book five of Virgil’s Aeneid (365–484).

In the tale, which relates the journey of the Trojan warrior Aeneas after the fall of Troy, Aeneas hosts funeral games in Sicily to commemorate the anniversary of the passing of his father. These include a boxing match pitting Dares, a Trojan, against Entellus, an older Sicilian champion. Though he is the underdog, Entellus ultimately becomes so furious in his fighting that the match must be stopped to prevent him from killing Dares. Entellus is awarded the prize bull, which he piously sacrifices by shattering its skull with a single punch between the horns.

The artist has captured the moment when the bull sinks to the ground and Dares turns away in defeat; both are bleeding from the forehead. Though perhaps not easily identifiable to the modern viewer, those in Roman times would have readily recognized the trails of red mosaic tiles on the bull’s forehead and near Dares’s head as blood. 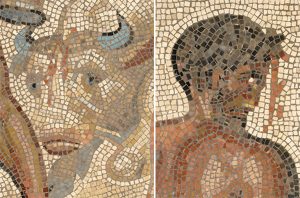 Viewers in ancient times would have encountered this particular snapshot of the Roman myth in a private home in what was then Roman Gaul. It was selected by the wealthy Roman homeowner in the second century A.D. to adorn the floor of his villa and was excavated in Villelaure, France, in 1900. In Roman times it was the norm for wealthy homeowners to use art to display their learning and to challenge their visitors’ intellect by depicting classical stories of famous poets throughout their homes. Ancient Roman elites visiting the villa would have been familiar with the story, as well as the frequent depiction of bloody wounds across Roman art. In fact, to show their savvy, they probably would have shared the image with their friends or at least stepped on the like button.