Excerpt from Sapiens: A Brief History of Humankind

The ability to create an imagined reality out of words enabled large numbers of strangers to cooperate effectively. But it also did something more. Since large-scale human cooperation is based on myths, the way people cooperate can be altered by changing the myths – by telling different stories. Under the right circumstances myths can change rapidly. In 1789 the French population switched almost overnight from believing in the myth of the divine right of kings to believing in the myth of the sovereignty of the people. Consequently, ever since the Cognitive Revolution Homo sapiens has been able to revise its behaviour rapidly in accordance with changing needs. This opened a fast lane of cultural evolution, bypassing the traffic jams of genetic evolution. Speeding down this fast lane, Homo sapiens soon far outstripped all other human and animal species in its ability to cooperate. 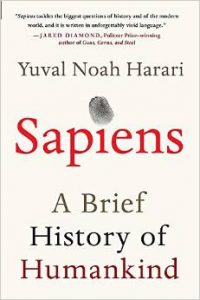 The behaviour of other social animals is determined to a large extent by their genes. DNA is not an autocrat. Animal behaviour is also influenced by environmental factors and individual quirks. Nevertheless, in a given environment, animals of the same species will tend to behave in a similar way. Significant changes in social behaviour cannot occur, in general, without genetic mutations. For example, common chimpanzees have a genetic tendency to live in hierarchical groups headed by an alpha male. Members of a closely related chimpanzee species, bonobos, usually live in more egalitarian groups dominated by female alliances. Female common chimpanzees cannot take lessons from their bonobo relatives and stage a feminist revolution. Male chimps cannot gather in a constitutional assembly to abolish the office of alpha male and declare that from here on out all chimps are to be treated as equals. Such dramatic changes in behaviour would occur only if something changed in the chimpanzees’ DNA.

For similar reasons, archaic humans did not initiate any revo- lutions. As far as we can tell, changes in social patterns, the inven- tion of new technologies and the settlement of alien habitats resulted from genetic mutations and environmental pressures more than from cultural initiatives. This is why it took humans hundreds of thousands of years to make these steps. Two million years ago, genetic mutations resulted in the appearance of a new human species called Homo erectus. Its emergence was accompanied by the development of a new stone tool technology, now recognised as a defining feature of this species. As long as Homo erectus did not undergo further genetic alterations, its stone tools remained roughly the same – for close to 2 million years!

In contrast, ever since the Cognitive Revolution 70,000 years ago, Sapiens have been able to change their behaviour quickly, transmitting new behaviors to future generations without any need of genetic or environmental change. As a prime example, consider the repeated appearance of childless elites, such as the Catholic priesthood, Buddhist monastic orders and Chinese eunuch bureaucracies. The existence of such elites goes against the most fundamental principles of natural selection, since these dominant members of society willingly give up procreation. Whereas chimpanzee alpha males use their power to have sex with as many females as possible – and consequently sire a large proportion of their troop’s young – the Catholic alpha male abstains completely from sexual intercourse or raising a family. This abstinence does not result from unique environmental conditions such as a severe lack of food or want of potential mates. Nor is it the result of some quirky genetic mutation. The Catholic Church has survived for centuries, not by passing on a ‘celibacy gene’ from one pope to the next, but by passing on the stories of the New Testament and of Catholic canon law.

In other words, while the behavior patterns of archaic humans remained fixed for tens of thousands of years, Sapiens could transform their social structures, the nature of their interpersonal relations, their economic activities and a host of other behaviors within a decade or two. Consider a resident of Berlin, born in 1900 and living to the ripe age of one hundred. She spent her childhood in the Hohenzollern Empire of Wilhelm II; her adult years in the Weimar Republic, the Nazi Third Reich and Communist East Germany; and she died a citizen of a democratic and reunified Germany. She had managed to be a part of five very different sociopolitical systems, though her DNA remained exactly the same.

This was the key to Sapiens’ success. In a one-on-one brawl, a Neanderthal would probably have beaten a Sapiens. But in a conflict of hundreds, Neanderthals wouldn’t stand a chance. Neanderthals could share information about the whereabouts of lions, but they probably could not tell – and revise – stories about tribal spirits. Without an ability to compose fiction, Neanderthals were unable to cooperate effectively in large numbers, nor could they adapt their social behaviour to rapidly changing challenges.