Home entertainment from a century ago.

Founded in 1896, Kinora Ltd. produced some of the first motion pictures in history. It converted the Lumière brothers’ Cinématographe into a home entertainment movie machine. Printed film reels could be purchased or rented, and personal “moving portraits” could be taken in a photographic studio. In 1908 the company also began offering a camera for amateur movie makers. The technology was short lived, however: Kinora ceased to produce its machines after its London factory burned in 1914.

The Getty Research Institute’s special collections house a Kinora viewer and six picture reels from about 1910. See the picture reels in action in the videos above: opening and closing of Tower Bridge, London; a lady and gent skating; girls punting; an elephant procession, Delhi Durbar, India; dancing; and boats at Henley on Thames, UK. 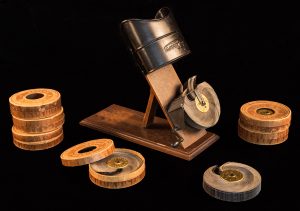