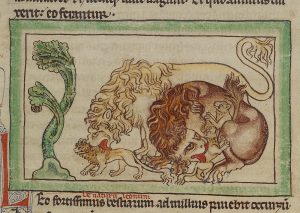 Lions (detail) in the Northumberland Bestiary, about 1250–60, unknown illuminator, made in England. Pen-and-ink drawing tinted with with body color and translucent washes on parchment, 8 1/4 × 6 3/16 in. The J. Paul Getty Museum, Ms. 100, fol. 8. Digital image courtesy of the Getty’s Open Content Program

The lion of pop culture derives its characteristics from medieval bestiary mythology.

The lion plays a fundamental role in the human conception of the animal world: we encounter the feline from childhood in toys, books, and TV shows. For the people of medieval Europe, illustrated stories were likewise a vehicle for visual encounters with the lion. To understand this animal, medieval storytellers repackaged lore from a second-century compendium of animal tales known as the Physiologus. They embellished stories about noble nature of the lion, making the creature one of the most revered beasts to appear in medieval manuscripts.

As lion tales traveled across Europe and were told and retold over time, details were changed and imbued with Christian overtones. Based on the observation that lionesses licked their young profusely after birth and that cubs took time to open their eyes, writers concluded that lion cubs were not born complete and required their mothers to lick them “into shape”—similar to the molding of Adam and Eve by God.

The great roar of an adult male lion also took on a Christian religious meaning: the breath of the father’s roar was said to bring his offspring to life the third day after birth, similar to the resurrection of Jesus on the third day after the Crucifixion. It was also believed that the lion slept with its eyes open, a conclusion drawn from observing the feline’s third eyelid. Europeans of the Middle Ages compared this behavior to Christ’s physical death and spiritual survival after the Crucifixion. Such beliefs, coupled with illuminations in bestiaries that emphasized the physical greatness of the lion, helped promote its reputation as the king of beasts—Christ’s animal equivalent. 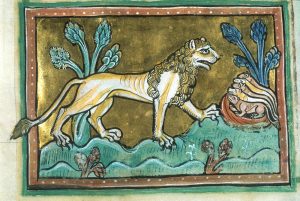 The lion was believed to attack those who dishonored it and reward those who revered it. Anyone who prostrated himself or herself before the lion would be spared, for the lion only attacked when hungry—a quality of fairness associated with ideals of earthly kingship. The link between lions and kings was strengthened by a similarity in the words used to describe them: the first line of the bestiary text reads, “Now leo in Greek is translated ‘king’ (rex) in Latin because he is the ruler of all beasts.”

Because European readers of bestiaries were unlikely to see a lion in person, associating the animal with a familiar human concept provided a mechanism for understanding.

Despite its kingly associations, the lion was not without fears. Bestiaries describe the beast’s terror of the white cock’s crow, the sound of wagon wheels, and fire. Lions could be killed by a scorpion sting or snakebite, and when ill could only be cured after consuming a monkey. In illuminated bestiaries, a lion’s attributes were communicated through its appearance: a lion with a great mane was fearless, for example, while a lion with curly and a smaller mane was cowardly.

In Richard de Fournival’s Bestiaire d’Amour (Bestiary of Love), a lion’s attack is likened to the suddenness and violence of falling in love. De Fournival also explains that the lion erases its tracks with its tail as it walks, like a man eluding blame—though some likened such behavior to Christ concealing his divine nature. The mother lion is said to breathe life into her cubs like a woman recalling her lover with but a word, sweet and tender.

Kingly Lions of History and Film

It was the strong and mighty lion, not the sneaky or cowardly one, that persisted in popularity over time. The great houses of medieval Europe associated themselves with the animal, which became a popular motif in heraldry. The rampant (rearing) lion in particular was prized for its confrontational pose, and it still graces the crests of families in Europe. 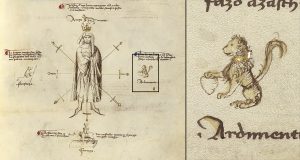 In medieval Europe animal lore was typically presented through a Christian lens. But over the centuries animal tales were increasingly presented in a secular context, leading to the associations of specific animals with specific traits that we still see in movies and stories today. The lions of contemporary popular culture include the dignified Simba of The Lion King, the fair Aslan of Narnia, and the Cowardly Lion from The Wizard of Oz—all characters that draw on traditional bestiary fables. The continuing popularity of animal lore stems from our natural connection to animals and our habit of projecting our own personality constructs onto them.

As an important means for Europeans to encounter foreign and exotic creatures, the bestiary created a mythos of the lion so powerful that it persists to this day.

Hassig, Debra. The Mark of the Beast: The Medieval Bestiary in Art, Life, and Literature. New York: Routledge, 2000.