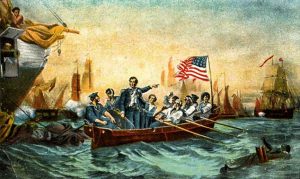 Over two hundred years ago today American naval vessels fired the opening shots in what we know as the War of 1812. Like all wars, this was a war filled with ironies and unintended consequences. It’s also a war that’s hard to fit into the nation’s triumphalist mythology.

For one thing, it was a misbegotten war. Lacking today’s fast communications, Washington didn’t learn until after the American declaration of war that the British had already repealed the offending trade restrictions that were a major U.S. pretext for taking up arms.

The war’s final battle, Andrew Jackson’s celebrated victory at New Orleans in early 1815, might also have been avoided with faster communications. The battle took place two weeks after negotiators had signed a peace agreement on Christmas eve 1814.

The final irony is that the Treaty of Ghent, which ended the war, left things as they had been at the start. The U.S. gained nothing concrete from two and half years of conflict and the loss of 15,000 American lives.

Yet if the war is often derided or forgotten, its consequences lie all around us, rooted deep in American life.

What the British call “the America War” was part of the closing phase of the global conflict that had raged across Europe and the world’s oceans since 1793. The United States, trying to remain neutral, found itself caught between Great Britain and France and was injured by the policies of both. James Madison’s administration took the U.S. into war against Britain principally because that nation’s impressment of American seamen and raids on American commerce seemed a dire threat to the young nation’s existence and an affront to its honor.

But the U.S. was unprepared for warfare. Ragtag American land forces rarely eked out battlefield victories and never secured their major strategic aim: control of Canada and the St. Lawrence valley. Though American naval forces acquitted themselves better, blue-water victories and successes on Lake Champlain and Lake Erie did little to alter the war’s course. Only skillful American diplomacy managed to pull peace out of stalemate. Though the Treaty of Ghent gained the Americans nothing, it did prevent the U.S. from losing any territory.

But what consequences, aside from peace, came from the conflict?

Sometimes called the Second War for American Independence, the War of 1812 conclusively established the permanent place of the United States among sovereign nations. In fact, as early as 1823, President James Monroe and Secretary of State John Quincy Adams felt confident enough to warn off other nations from casting their eyes on any part of this hemisphere. With the Monroe Doctrine, the United States threw its protection¬ — and its enduring hegemony¬ — over an entire hemisphere. That would not have been possible before the U.S. had put an end to all threats to its own existence.

Equally important, with France and Britain no longer contesting U.S. authority on the North American continent and American borders now secure, the United States entered a major new phase in its history: It was now free to spread westward, unmolested. That, however, proved a mixed blessing. A new continental colossus came into being, a Pacific as well as Atlantic power. But so did a great slave power. The Cotton Kingdom of the lower South was secured by Jackson’s victory. As slavery followed Americans southward and westward into new territory, the conditions for later civil war took root.

Another of the war’s consequences: Once peace had been secured and trade with the world regained in 1815, the nation’s commercial and democratic energies were unleashed. “Jacksonian Democracy” we call it. All adult white men gained the vote, landholding spread among white Americans, market forces came to rule the economy, and what we think of as the classic American way of life emerged: ¬free, capitalistic, individualistic, self-interested.

But as we know, wars have blowbacks. This one was no exception. The War of 1812 reawakened long-held American designs on Canadian territory. Yet, paradoxically, just as the war made the United States proudly aware of itself as a nation, able for the second time to stand up to the world’s greatest maritime power, it was because of American wartime assaults on Canada that American imperial ambitions north of the border were forever thwarted. This second war with Britain created what the War of Independence had not: Canadian nationalism and a sense of Canadian collective identity. The stable, ordered country that now borders the United States came into being partly because of inept American invasions during the war.

Finally, the war broke the back of the remaining Indian confederations east of the Mississippi. The Iroquois in the north and the Creek people in the south both allied with Britain during the war, and for them the conflict was devastating. It put an end to native power east of the Mississippi and laid the groundwork for Indian removal to western reservations. An era of Indian annihilation opened, an era whose results we live with yet.

Looking for lessons in any particular war is a fool’s errand. But looking for the remains of a war in a nation’s society and culture is not. We may consign the War of 1812, like the Korean War and the wars in Afghanistan and Iraq, to a category of inglorious conflicts of inconclusive results. But without the War of 1812, the history of Canada, the fate of American slaves and native Americans, even the nation’s ability to stand free among the nations of the world would probably have taken different turns. The War of 1812 helped to form the United States into the nation it is today.

Originally published by Origins: Current Events in Historical Perspective, from the history departments of The Ohio State University and Miami University, under a Creative Commons license.