A Unicorn (detail) in the Northumberland Bestiary, about 1250–60, unknown illuminator, made in England. Pen-and-ink drawing tinted with with body color and translucent washes on parchment, 8 1/4 × 6 3/16 in. The J. Paul Getty Museum, Ms. 100, fol. 11. Digital image courtesy of the Getty’s Open Content Program

With a weakness for virgin maidens, the unicorn, long seen as a tame mythical creature of lore, is anything but docile.

With a mighty horn on a donkey’s stout body, the unicorn is an oddity in the pages of illuminated bestiaries. Today we know the unicorn as an imaginary animal and a coy and playful emoji. In the Middle Ages, however, the unicorn had a tragic tale—one quite unlike its light-hearted smartphone counterpart.

Bestiaries were illuminated manuscripts that combined stories of real and imagined animals, using them as allegories for Christian morals. Part theological and part pseudo-zoological, they were designed to reinforce faith in Christian doctrines in the Middle Ages in Europe.

The unicorn is commonly described as ferocious; for example, it is said to be an opponent of the elephant, which it would spear in the abdomen with its horn. It is also quick, even impossible to catch. The unicorn becomes docile, however, in the hands of a virgin—symbolic of the mother of Christ, the Virgin Mary.

In many bestiary representations, a virgin is used to lure the unicorn. She heads to the forest until a unicorn sees her and jumps into her lap. Some representations of this moment involve the unicorn sucking on the virgin’s breast until it falls asleep. During its slumber, the unicorn is caught by hunters and ultimately taken to the king.

The unicorn was treasured for its horn, which was thought to have the ability to detect poison if placed in contaminated food or drink, and render it impotent. The horn was also believed to function as an aphrodisiac or teeth whitener when ground into a powder. (Real narwhal horns were usually used as imposters for unicorn horns.)

In bestiary illuminations, the unicorn is almost always shown as the victim of a momentous hunting scene. It is pierced in the side of the lower abdomen by a hunter, while scarlet blood falls from its wounds, recalling Christ’s sacrifice. The virgin stands next to the unicorn, embraces it, or holds it in her lap, often appearing remorseful for having colluded in the animal’s capture. 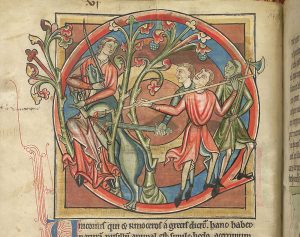 To emphasize to the unicorn’s fierceness, the hunters in some bestiaries are shown clothed in metal garb from head to toe, with a shield to avoid any damage from the unicorn’s horn.

Today we no longer believe in the unicorn’s existence, and we need not worry about protecting ourselves with armor from its mighty horn. But knowing the unicorn’s story of fierceness, trickery, and bloodshed might make us second-guess using its digital doppelgänger again. 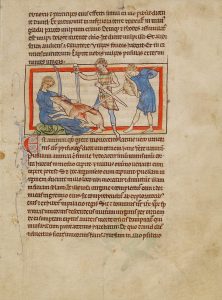 A Unicorn in the Northumberland Bestiary, about 1250–60, unknown illuminator, made in England. Pen-and-ink drawing tinted with with body color and translucent washes on parchment, 8 1/4 × 6 3/16 in. The J. Paul Getty Museum, Ms. 100, fol. 11. Digital image courtesy of the Getty’s Open Content Program