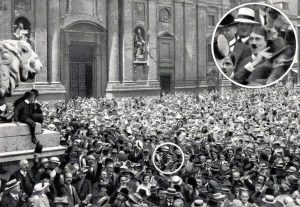 A young Adolf Hitler cheering the rhetoric World War I.

How the Great War spawned a tyrant. 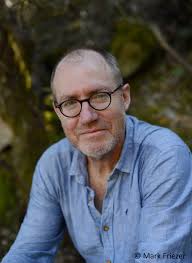 The collapse of any society brings forth monsters, to adapt Goya.

In this sense, there was nothing uniquely German about the Nazis. Hitler and the National Socialist party he created could have happened anywhere.

It is fair to say that had America, Britain, France or any nation for that matter, been left in the brutalized state of Germany in 1918-19, they may have found their own Führer, preying on their humiliation and social chaos, and blaming it all on a defenseless minority.

In this light, Hitler was Europe’s creation as much as Germany’s: he sprang from the broken world of Flanders and the Somme, Versailles and hyperinflation. The First World War plowed a field so barren of hope that Hitler’s murderous manifesto fell on hearts and minds so utterly fraught they were willing to believe in it.

The brutalization of a people, rather than any inherent qualities in Hitler as a man, brought him to power. The First World War debased German society so completely that racist cranks and fascist rabble-rousers were considered rational and normal.

As the historian Joachim Fest rightly observes, Hitler’s rise to power “depended not so much on his demonic traits as on his typical, ‘normal’ characteristics…. He was not so much the great contradiction of his age as its mirror image.”’ 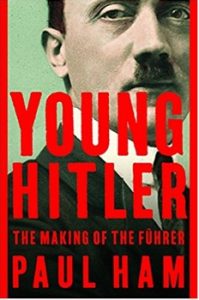 At every level – psychologically, emotionally and politically – the Great War acted like a forge on Hitler’s character, hammering his embittered mind into a vengeful political machine. Insofar as he personified the forces of hatred and destruction, he personified the war.

His inchoate loathing, his unfocused aggression, his hunt for a culprit who had ‘back-stabbed’ his beloved army, his longing for a role in a world that had rejected him, all coalesced with his fury at Germany’s defeat and its aftermath.

Even strategically, the First World War later influenced his judgement. In the Second he would disastrously misapply the strategic lessons of the First and grossly underestimate the strength of the Red Army.

But it was his memory of the humiliation of November 1918, the hated Armistice, that travelled with him like a weeping wound, unbearable, suppurating, an ever-present reminder of the experience that later shaped his every thought and action.

He was not like most soldiers, of course: Hitler had constantly thrilled to battle, later describing his regiment’s last, disastrous offensive action in 1918 as the most “stupendous” experience of his life. He passionately loved soldiering, as he always said.

He saw something at First Ypres in 1914 that eluded his fellow men: for Hitler, the soldiers’ sacrifice was not only heroic, it was also necessary, noble and natural.

For young Hitler, the First World War was the last act of “the fittest” in the great drama of the human race, the re-enactment of a vast Wagnerian tragedy from which the Nibelungs would emerge victorious and inherit the earth.

When the Germans failed to do so, Hitler identified those he held responsible for the soldiers’ humiliation, and would even prescribe, in Mein Kampf, their coming punishment:

If at the beginning of the war and during the war twelve or fifteen thousand of these Hebrew corrupters of the people had been held under poison gas, as happened to hundreds of thousands of our very best German workers in the field, the sacrifice of millions at the front would not have been in vain. On the contrary: twelve thousand scoundrels eliminated in time might have saved the lives of a million real Germans . . .

In mourning the loss of tens of thousands of “beardless youths” at Langemarck in 1914, Hitler would never forgive those he held responsible for Germany’s defeat: the “shirkers,” the Jews and socialists who, he claimed, had “cunningly dodged death.”

But in largely blaming the Jews, in 1919, for Germany’s “stab in the back,” Hitler refused to accept what had been palpably clear to any soldier at the Armistice on 11 November 1918: Germany had lost the war at the front.

The war and its aftermath threw him into politics. Hitler’s memory of the Kindermord, his wounds and gassing, his contempt for the complacency on the home front, his rage against the Treaty of Versailles, his intense idea of himself as a man of destiny and avenger of the army – all served to recast this flint-hearted individual as a politician driven by vengeance and fomented by millions of fellow travellers, who had in Hitler a man willing to act on their darkest prejudices.

In this sense, Hitler was more than the creation of the First World War. In his mind, he was its will and representation, a miracle of survival who imagined he gave voice to the dead, who dreamed that his howl of hatred spoke for the corpses in the mass graves at Langemarck, after a war that had killed 2.5 million German people.

The memory lived with the Führer until the very end. In his Berlin bunker he looked back on the Great War as the defining event of his life. He wore his Iron Cross (First Class) – recommended, in a stunning historical irony, by the highest ranking Jewish officer in his regiment – at his marriage to Eva Braun on April 29, 1945, forty hours before the newly-weds would kill themselves.

To this day, some claim Hitler was a great, if flawed, leader, crushed by the machinations of others. Joachim Fest asserts that had Hitler died of an assassin’s bullet in 1938 most Germans would remember him today as one of the greatest statesmen their country had produced. This astounding remark fails any objective test of greatness, if the term means a just and enlightened leader.

The inconvenient fact is that by 1938, on Hitler’s orders, the Nazis had viciously consolidated their power, dismantled the legal system, killed off parliamentary democracy, assembled a huge war machine, oppressed non-Aryan minorities and erected a one-party dictatorship.

Nor was Hitler the tool of others. Both Marxists and capitalists sought to portray him as the puppet of their opponents, failing to see that Hitler was always his own man, impelling his audiences in the direction he chose through the sheer force of his voice and his irrepressible will.

That is not to suggest that millions of ordinary Germans approved of the Holocaust – most were unaware of the extent of the Nazis’ genocidal crimes, and many of those who did know were complicit in the crimes or indifferent to what they found out.

It is to say that feelings of violent nationalism and hatred for easily scapegoated minorities were so ingrained in post-war Germany as to facilitate the rise of a politician who articulated, and would later act on, those feelings.