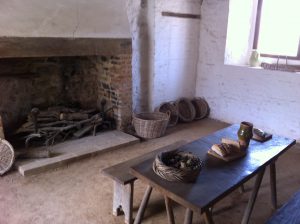 There are over 50 hand-written medieval cookery manuscripts stills in existence today. Some are lists of recipes included in apothecaries’ manuals or other books of medical remedies. Others focus on descriptions of grand feasts. But most are devoted to recording the dishes of the medieval kitchen. The majority of recipes recorded in these manuscripts will have been cooked in the houses of wealthy noblemen. 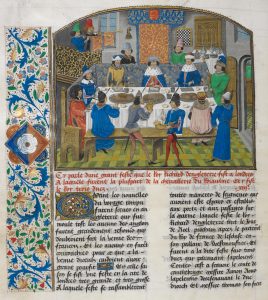 Miniature of Richard II dining with the Dukes of York, Gloucester and Ireland / Royal feasts, as depicted here, were an opportunity for a monarch to show off his wealth with extravagant delicacies of fresh meat, fish and vegetables. At the centre of this illustration, a servant carries a ship, a sugar sculpture known as sotiltees.

Food for the Wealthy

A nobleman’s diet was very different from the diets of those lower down the social scale. Aristocratic estates provided the wealthy with freshly killed meat and river fish, as well as fresh fruit and vegetables. Cooked dishes were heavily flavoured with valuable spices such as caraway, nutmeg, cardamom, ginger and pepper.

Other commonly used ingredients included cane sugar, almonds, and dried fruits such as dates, figs or raisins. The wealthy treasured these goods, which were imported from overseas, and were hugely expensive. Indeed, there was a department at the royal court called the ‘spicery’, which was entirely devoted to spices. Spicy sauces were popular, and entire professional careers were dedicated to saucemaking.

A recipe for pastry castles, from The Forme of Cury / The Forme of Cury is the oldest known cookery manuscript written in the English language and was approved by King Richard II’s cooks. The book is intended to teach everyday dishes as well as spectacular dishes for banquets, with many of the recipes using contemporarily unusual spices such as ginger and pepper. This recipe is for chastletes, or small pastry castles, filled with pork or almonds.

Banqueting tables at grand feasts were decked with spectacular dishes – providing the perfect opportunity for noblemen to show off their wealth. Everyday jellies, pies, fritters and stews were accompanied by magnificent animals such as peacocks, seals, porpoises and even whales. Jellies and custards were dyed with vivid natural colourings – sandalwood for red, saffron for a fiery yellow, and boiled blood for black. But the most visually alluring pieces at the table were sugar sculptures known as sotiltees (or subtleties). These sculptures came in all sorts of curious forms – castles, ships, famous philosophers, or scenes from fables. Sotiltees were also known as ‘warners’, as they were served at the beginning of a banquet to ‘warn’ (or notify) the guests of the approaching dinner. Unlike today, meals were not separated into savoury main courses and sweet desserts. Instead, many dishes were laid out together. Special courtesy books, which were popular at the time, instructed diners not to fart, scratch flea bites, or pick their noses. 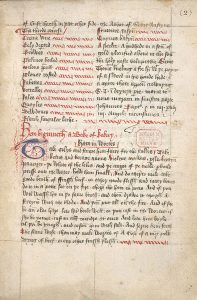 Manuscript page of a recipe, from A Boke of Kokery / A Boke of Kokery contains 182 recipes, detailing the ingredients, but not their quantity of cooking times. They may have acted as reminders of recipes for cooks that were already trained in the kitchens of aristocratic families.

Those lower down the social scale ate a less impressive diet. Unless you served in a large household, it was difficult to obtain fresh meat or fish (although fish was available to those living by the sea). Most people ate preserved foods that had been salted or pickled soon after slaughter or harvest: bacon, pickled herring, preserved fruits, for instance. The poor often kept pigs, which, unlike cows and sheep, were able to live contentedly in a forest, fending for themselves. Peasants tended to keep cows, so their diets consisted largely of dairy produce such as buttermilk, cheese, or curds and whey.

Rich and poor alike ate a dish called pottage, a thick soup containing meat, vegetables, or bran. The more luxurious pottage was called ‘mortrew’, and a pottage containing cereal was a ‘frumenty’. Bread was the staple for all classes, although the quality and price varied depending on the type of grain used. Some people even used bread as plates: ‘trenches’ were thick slices of bread, slightly hollowed out, and served bearing food at meal times.