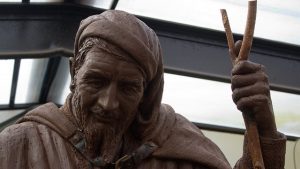 The world about which Chaucer wrote was a very different world from that which produced Beowulf.

The world about which Chaucer wrote was a very different world from that which produced Beowulf. Developments in language, new structures in society, and changes in how people viewed the world and their place in it produced literature unlike the heroic literature of the Old English period.

After the Norman Conquest in 1066, Old English was suppressed in records and official venues in favor of the Norman French language. However, the English language survived among the conquered Anglo-Saxons. The peasant classes spoke only English, and the Normans who spread out into the countryside to take over estates soon learned English of necessity. By the 14th century, English reemerged as the dominant language but in a form very different from Anglo-Saxon Old English. Writers of the 13th and 14th centuries described the co-existence of Norman French and the emerging English now known as Middle English. 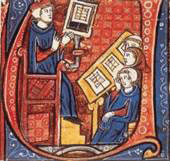 A medieval university from a 13th-century illuminated manuscript.

In the Middle Ages, the king-retainer structure of Anglo-Saxon society evolved into feudalism, a method of organizing society consisting of three estates: clergymen, the noblemen who were granted fiefs by the king, and the peasant class who worked on the fief. Medieval society saw the social order as part of the Great Chain of Being, the metaphor used in the Middle Ages to describe the social hierarchy believed to be created by God. Originating with Aristotle and, in the Middle Ages, believed to be ordained by God, the idea of Great Chain of Being, or Scala Naturae, attempted to establish order in the universe by picturing each creation as a link in a chain beginning with God at the top, followed by the various orders of angels, down through classes of people, then animals, and even inanimate parts of nature. The hierarchical arrangement of feudalism provided the medieval world with three estates, or orders of society: the clergy (those who tended to the spiritual realm and spiritual needs), the nobility (those who ruled, protected, and provided civil order), and the commoners (those who physically labored to produce the necessities of life for all three estates). However, by Chaucer’s lifetime (late 14th century), another social class, a merchant middle class, developed in the growing cities. Many of Chaucer’s pilgrims represent the emerging middle class: the Merchant, the Guildsmen, and even the Wife of Bath.

The most important philosophical influence of the Middle Ages was the Church, which dominated life and literature. In medieval Britain, “the Church” referred to the Roman Catholic Church. 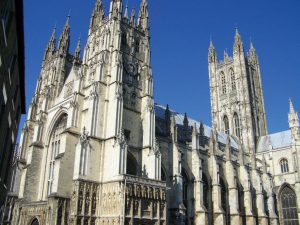 Although works such as Chaucer’s Canterbury Tales reveal an exuberant, and often bawdy, sense of humor in the Middle Ages, people also seemed to have a pervasive sense of the brevity of human life and the transitory nature of life on earth. 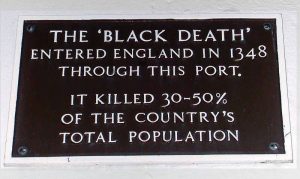 Outbreaks of the plague, known as the Black Death, affected both the everyday lives and the philosophy of the Middle Ages. It was not unusual for the populations of entire villages to die of plague. Labor shortages resulted, as did a fear of being near others who might carry the contagion. In households where one member of a family contracted the plague, other members of the family were quarantined, their doors marked with a red x to warn others of the presence of plague in the house. Usually other members of the family did contract and die from the disease although there were instances of individuals, particularly children, dying from starvation after their parents succumbed to plague. 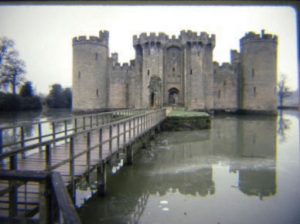 Even beyond the outbreaks of plague, the Middle Ages were a dangerous, unhealthy time. Women frequently died in childbirth, infant and child mortality rates were high and life expectancies short, what would now be minor injuries frequently resulted in infection and death, and sanitary conditions and personal hygiene, particularly among the poor, were practically non-existent. Even the moats around castles that seem romantic in the 21st century were often little more than open sewers.

With these conditions, it’s not surprising that people of the Middle Ages lived with a persistent sense of mortality and, for many, a devout grasp on the Church’s promise of Heaven. Life on earth was viewed as a vale of tears, a hardship to endure until one reached the afterlife. In addition, some believed physical disabilities and ailments, including the plague, to be the judgment of God for sin. 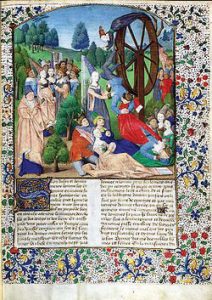 Fortuna spinning her Wheel of Fortune, from a work of Boccaccio

The Church incorporated the wheel of fortune in its imagery. Many medieval cathedrals feature rose windows. From the exterior of the church, the stone tracery of the window looks similar to a wheel of fortune; from within the church, sunlight floods through the glass, revealing its beauty. Symbolically, those outside the Church are at the mercy of fortune’s vagaries; those in the Church see the light through the stonework, suggesting the light of truth and faith, the light of Christ, available to those within the Church.

Rose window in the Basilica of St. Francis in Assissi, Italy. Note how the stone tracery from the outside looks like a wheel of fortune. From inside the Church, the light is apparent.

In addition to religion, a second philosophical influence on medieval thought and literature was chivalry, the code of conduct that bound and defined a knight’s behavior.

The ideals of chivalry form the basis of the familiar Arthurian legends, the stories of King Arthur and his Knights of the Round Table. Historians generally agree that, if Arthur existed, it was most likely in the time period after the Roman legions left Britain undefended in the fifth century. Arthur was likely a Celtic/Roman leader who, for a time, repelled the invading Anglo-Saxons. However, the King Arthur of the familiar legends is a fictional figure of the later Middle Ages, along with his Queen Guinevere, the familiar knights such as Lancelot and Gawain, his sword Excalibur, Merlin the magician, and his kingdom of Camelot.

The concepts of chivalry and courtly love, unlike King Arthur, were real. The word chivalry, based on the French word chevalerie, derives from the French words for horse (cheval) and horsemen, indicating that chivalry applies only to knights, the nobility. Under the code of chivalry, the knight vowed not only to protect his vassals, as demanded by the feudal system, but also to be the champion of the Church.

Because the Church and the concept of chivalry were dominant factors in the philosophy of the Middle Ages, these two ideas also figure prominently in medieval literature. 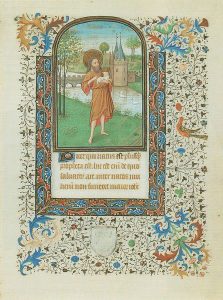 John the Baptist from a medieval book of hours

Like the oral tradition of the Anglo-Saxon age, mystery plays and morality plays served a predominantly illiterate population.

Britain’s National Trust presents a video describing the Sarum Missal printed by Caxton, an important extant example of the religious literature of the Middle Ages, as well as a second brief video of their turn-the-pages digital copy of the missal that allows a closer inspection of several pages. The British Library features a turn-the-pages digital copy of the Sherborne Missal.

In Britain, chivalric literature, particularly the legends of King Arthur and his Knights of the Round Table, flowered in the medieval romance, a narrative, in either prose or poetry, presenting a knight and his adventures. The word romance originally indicated languages that derived from Latin (the Roman language) and is not related to modern usage of the word to signify romantic love. Instead a medieval romance presents a knight in a series of adventures (a quest) featuring battles, supernatural elements, repeated events, and standardized characters.

Caxton and the Printing Press

Caxton revolutionized the history of literature in the English language in 1476 when he set up the first printing press in England somewhere in the precincts of Westminster Abbey. The first to print books in English, Caxton helped to standardize English vocabulary and spelling.

Caxton and the Printing Press