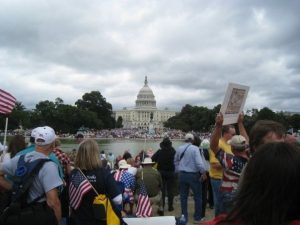 In the late nineteenth century, a new American political party sprung up to defend the interests of farmers.

The Populists were an agrarian-based political movement aimed at improving conditions for the country’s farmers and agrarian workers. The Populist movement was preceded by the Farmer’s Alliance and the Grange.

The People’s Party was a political party founded in 1891 by leaders of the Populist movement. It fielded a candidate in the US presidential election of 1892 and garnered 8.5% of the popular vote, which was a substantial amount of support for a third party.

The Populists allied with the labor movement and were folded into the Democratic Party in 1896, though a small remnant of the People’s Party continued to exist until it was formally disbanded in 1908.

Agrarian Activism in the United States

Beginning in the late nineteenth century, the nation’s farmers began to organize to defend their interests against what they perceived to be the interests of the Eastern establishment and banking elite. As the number of landless tenant farmers rose, and as the debts of independent farmers skyrocketed due to burdensome loan terms and interest rates from banks, discontent among the nation’s agrarian workers burgeoned.

In 1876, the Farmer’s Alliance was established in Texas with the goal of ending the crop-lien system that had thrown so many farmers into poverty. The crop-lien system operated in the cotton-growing South, among sharecroppers and tenant farmers, both white and black, who did not own the land that they worked. These workers took out loans to obtain the seed, tools, and other supplies they needed to grow the cotton. After the harvest, they were required to pay back the loans in the form of cotton crops. When cotton prices tanked, these workers were sometimes left with nothing after their crops were collected by creditors. 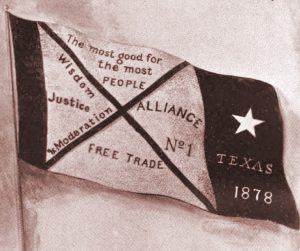 The Farmer’s Alliance was not the only organization that sprang up to defend the nation’s agrarian workers. The National Grange of the Order of Patrons of Husbandry, known as the Grange, was founded in 1868 in New York to advocate on behalf of rural communities. From 1873 to 1875, local chapters of the Grange were established across the country, and membership skyrocketed. This was partly due to the Panic of 1873, a financial crisis that resulted in a number of bank failures and the bankruptcy of several of the nation’s railroads. The Panic of 1873 depressed wages for workers, and the prices of agricultural products plummeted, saddling farmers with massive amounts of debt that they had little hope of paying off.

In 1891, the People’s Party (also known as the Populist Party, or the Populists) was formed as a political party representing the interests of the nation’s agricultural sector. The Farmer’s Alliance was a major part of the Populist coalition.

The People’s Party nominated James B. Weaver, a former US representative from the state of Iowa, as its candidate in the 1892 presidential election. Campaigning on a platform designed to strengthen farmers and weaken the monopolistic power of big business, banks, and railroad corporations, the People’s Party garnered 8.5% of the popular vote, carrying the states of Colorado, Idaho, Kansas, and Nevada. 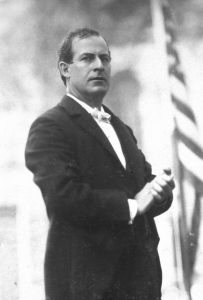 William Jennings Bryan was the presidential candidate for the Democrats in 1896. / Library of Congress

The effect of the fusion of the Populist Party and the Democratic Party was a disaster in the South. Though there had always been conflict within the Populist movement about whether African Americans should be included, the Democratic Party in the South was unabashedly racist. Though Bryan performed strongly in the areas of greatest Populist influence, he lost the election to Republican William McKinley.

The People’s Party continued to function and fielded candidates in both the 1904 and 1908 presidential elections, but the heyday of the party’s influence was over. Although the People’s Party was formally disbanded in 1908, the Progressive movement would take up many of the goals and causes of Populism, including anti-trust legislation, greater federal regulation of private industry, and stronger support for the nation’s agricultural and working classes.