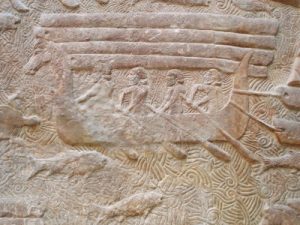 Driven by their desire for trade and the acquisition of such commodities as silver from Spain, gold from Africa, and tin from the Scilly Isles, the Phoenicians sailed far and wide, even beyond the Mediterranean’s traditional safe limits of the Pillars of Hercules and into the Atlantic. They were credited with many important nautical inventions and firmly established a reputation as the greatest mariners in the ancient world. Phoenician ships were represented in the art of their neighbours, and their seamanship is praised above all other by such ancient writers as Homer and Herodotus. If any nation could claim to be the masters of the seas, it was the Phoenicians.

The Phoenicians became sailors in the first place because of the topography of their homeland, the narrow mountainous strip of land on the coast of the Levant. Travelling between settlements, usually located on rocky peninsulas, was much easier by sea, especially when carrying such cumbersome cargo as cedar wood logs for which the Phoenicians were famed. It was thanks to the very same wood the Phoenicians were never short of the necessary raw materials to build their ships. The Phoenicians also preferred the security of small islets just off the coast, the classic example being the great city of Tyre, so that ships were the most practical means of transport.

Hemmed in by mountains, then, when the time came, perhaps from the 12th century BCE, the natural direction of Phoenician expansion was not inland but the sea. As a result of this search for new resources such as gold and tin, the Phoenicians became accomplished sailors, creating an unprecedented trade network which went from Cyprus, Rhodes, the Aegean islands, Egypt, Sicily, Malta, Sardinia, central Italy, France, North Africa, Ibiza, Spain and beyond even the Pillars of Hercules and the bounds of the Mediterranean. In time, this network transformed into an empire of colonies so that the Phoenicians criss-crossed the seas and gained the confidence to reach such far-flung places as ancient Britain and the Atlantic coast of Africa.

The Phoenicians were famed in antiquity for their ship-building skills, and they were credited with inventing the keel, the battering ram on the bow, and caulking between planks. From Assyrian relief carvings at Nineveh and Khorsabad, and descriptions in texts such as the book of Ezekial in the Bible we know that the Phoenicians had three types of ship, all shallow-keeled. Warships had a convex stern and were propelled by a large single-masted square sail and two banks of oars (a bireme), had a deck, and were fitted with a ram low on the bow.

The second ship type was for transport and trade purposes. These were similar to the first type but, with wide, big-bellied hulls, they were much heavier. They perhaps had higher sides too in order to permit the stacking of cargo on deck as well as below, and they had both a convex stern and bow. Their cargo capacity was somewhere in the region of 450 tons. A fleet might consist of up to 50 cargo vessels, and such fleets are depicted in reliefs being escorted by a number of warships. 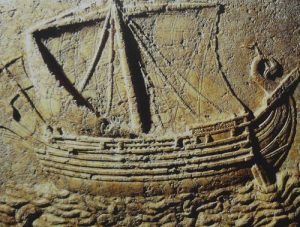 A third type of vessel, also for trade use, was much smaller than the other two, had a horse-head at the bow and only one bank of oars. Due to its size, this vessel was only used for coastal fishing and short trips. No Phoenician ship has been recovered intact by maritime archaeologists but judging by the pictorial evidence the ships would have been difficult to handle. It is also worth noting that the more oarsmen a ship had then the less room there was for cargo. Greater manoeuvrability was, therefore, achieved by adjusting the sail when necessary and the use of a double sailing oar.

Ancient ships were far from easy to handle but in antiquity the Phoenicians were widely known as the best sailors around. Herodotus describes one episode during the build up to the second Persian invasion of Greece in 480 BCE led by Xerxes. The Persian king wanted to put his multi-national fleet through their paces and so organized a sailing race, which the sailors from Sidon won. Herodotus also mentions that Xerxes always made sure to travel on a Phoenician ship whenever he had to go anywhere by sea.

The Phoenicians did not have the compass or any other navigational instrument, and so they relied on natural features on coastlines, the stars, and dead-reckoning to guide their way and reach their destination. The most important star to them was the Pole Star of the Ursa Minor constellation and, by way of a compliment to their sea-faring skills, the Greek name for this group was actually Phoenike or ‘Phoenician’. Some maps of coastal stretches are known to have existed but were unlikely to have been used during a voyage. Rather, navigation was achieved through the position of the stars, sun, landmarks, direction of the winds, and the experience of the captain of tides, currents and winds on the particular route being taken. Close to shore, Herodotus mentions the use of sounding leads to measure the sea depth, and we know that Phoenician ships had a crow’s nest for greater visibility.

Historians long considered that the Phoenicians sailed only during the day-time as they had to keep close to the shoreline and within sight of landmarks; at night they, therefore, had to beach or anchor their ships and this explained the proximity of some Phoenician colonies, a day’s sailing distance from each other. This simplistic view has been revised in recent years. First and foremost, the often mountainous coastline of the Mediterranean means that one can sail a great distance from land and still keep high landmarks in sight, a strategy still used by many local fishermen today. Indeed, the areas of sea where it is not possible to sight land of some sort are remarkably few in the Mediterranean, and these are places ancient mariners would have had no interest in crossing anyway. In addition, it can actually be more dangerous sailing close to a coast than out to sea where there are no rocks or unpredictable currents. 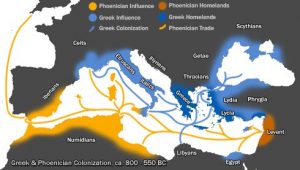 Neither does the traditional view take into account that the Phoenicians used astronomical observations at night. Further, many Phoenician settlements were either much closer than a day’s sailing distance or much further, for example, Ibiza is 65 straight miles from Iberia. The same can be said for Sardinia and Sicily, and there is also evidence that the Phoenicians made use of even more remote smaller islands as stopping points. It seems reasonable to assume, then, that Phoenician navigators, at least in fine weather, would have chosen the shortest direct route between two points and not necessarily hugged the coast or stopped each night as much as once thought. The non-stop voyages described in both Hesiod and Homer would seem to deserve more credit as to their accuracy. It is true that in foggy or rainy weather landmarks and stars become useless but that is probably why the Phoenicians restricted their sailing season to the period between late spring and early autumn, when the Mediterranean climate is remarkably stable.

Both Herodotus and Thucydides agree that the average speed of an ancient vessel was around 6 miles per hour, and therefore, taking into account stops for bad weather, rest etc., it would have taken, for example, 15 days to sail (and sometimes row) from Greece to Sicily. Colaios sailed from Samos to Gadir (in southern Spain), a distance of 2,000 miles, in the 7th century BCE, and that would have taken around 60 days. Long voyages, then, would frequently have required winter stop-overs and continuing in the next sailing season. Herodotus mentions this fact, even describing how the mariners were able to grow their own wheat as they waited. So, from one end of the Phoenician world to the other – Tyre to Gadir (over 1,600 miles) – might have taken 90 days or a full sailing season; the ship would have unloaded and re-loaded cargo and made the journey back the next year.

Map of Phoenicia and its trade routes.

The actual routes taken by the Phoenicians are much debated, but if we assume the currents of the Mediterranean have not changed since antiquity, then it seems likely that ancient mariners took advantage of the long-distance currents used by sailors today. The route west, then, would probably have been via Cyprus, the coast of Anatolia, Rhodes, Malta, Sicily, Sardinia, Ibiza, and along the coast of southern Spain to silver-rich Gadir. The homeward journey would have benefitted from the current which sweeps back right through the centre of the Mediterranean. This would give two possible routes: to Ibiza and then Sardinia, or to Carthage on the North African coast and then to either Sardinia or direct to Malta, and then Phoenicia. It is no surprise that at each of these vital strategic stopping points the Phoenicians created colonies which, in effect, cut out, at least for a few centuries, competing trading cultures such as the Greeks.

According to Herodotus, the Phoenicians managed to circumnavigate Africa in a voyage in c. 600 BCE sponsored by the Egyptian pharaoh Necho. Starting from the Red Sea, they sailed westwards in a journey that took three years. The sailors of Phoenicia’s most successful colony Carthage were said to have sailed to ancient Britain in an expedition led by Himilco in c. 450 BCE. Another famous Carthaginian voyage, this time by Hanno in c. 425 BCE, reached the Atlantic coast of Africa as far down as modern Cameroon or Gabon. The voyage, whose purpose was to found new colonies and find new sources of valuable commodities (especially gold), is recorded on a stele from the temple of Baal Hammon at Carthage. In the tale, Hanno describes meeting savage tribes, volcanoes, and exotic animals such as gorillas.

The Phoenicians were not limited to the Mediterranean and the Atlantic, they also sailed down the Red Sea and possibly the Indian Ocean too. The book of I Kings in the Bible describes a Phoenician expedition during the 10th century BCE to a new land called Ophir in order to acquire gold, silver, ivory, and gems. The location of Ophir is not known but is variously considered to be in the Sudan, Somalia, Yemen, or even an island in the Indian Ocean. The ships of this fleet were built at Eziongeber on the Red Sea coast and funded by King Solomon. The great distance covered is suggested by the description that the expedition was repeated only every three years.

The ancient historian Diodorus claimed that the Phoenicians reached the Atlantic islands of Madeira, the Canary Islands, and the Azores. There is, though, no archaeological evidence of direct Phoenician contact, only the discovery in 1749 CE of eight Carthaginian coins dating to the 3rd century BCE. Just how they got there can only be speculated upon.