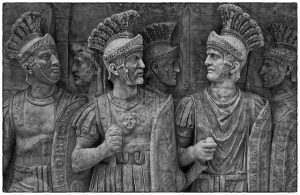 The Praetorian Guard (cohortes praetoriae) was, in the Roman Republic, a commander’s personal bodyguard and then, in the imperial period, an elite force assigned to protect the emperor and Rome. Over the years, the guard would become a dangerous threat to imperial power and emperors were forced to gain its favour in order to ensure their reign. In the 1st and 2nd century CE many an emperor was murdered with Praetorian Guard involvement, and once one of their number, Macrinus, was even declared emperor. The body specifically created to protect the emperor’s person had become his greatest liability. 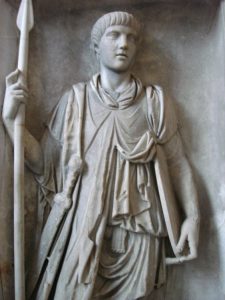 In the Republican period, the Praetorians were a small escort which protected an army commander, general, or governor. Their name derives from the commander’s tent, a praetorium. This small force grew in number during Rome’s civil wars with each leader having a large personal bodyguard. Rome’s first emperor Augustus went a step further and, in 27 BCE, created a permanent bodyguard of nine cohorts totalling at least 4,500 men to protect himself and the royal family, the Praetorian Guard. This was in addition to the small band of, mostly Germanic, bodyguards he and many of his successor employed.

In 2 BCE Augustus appointed two Prefects (praefectus praetorio) to command the Praetorian Guard with both directly responsible to the emperor. Curiously, they were the only men allowed to carry a sword in the emperor’s presence. Over time these Prefects, possessing the highest equestrian rank, were made members of the emperor’s advisory council and even acquired some judicial, financial, and army logistics functions. They also increased in number with five in place during the reign of Constantine I.

During the reign of Tiberius, Augustus’ successor, the Guard was expanded to 12 cohorts. Vitellius (r. 69 CE) expanded it again by adding some of his Rhine army so that the Guard now had sixteen 1,000-man cohorts. Domitian (r. 81-96 CE) then reduced the number to ten 1,000-man cohorts, each commanded by a tribune. Units of 100 men were commanded by a centurion, the most senior of which was the trecenarius.

A cavalry wing was added, too, the equitessingulares Augusti, which consisted of first 500 horses and then later 1,000. Increasingly, from the 2nd century CE, the Praetorian Guard were used as a useful army reserve and they often took to the field of battle, aiding their emperor defend the empire or their candidate of emperor-to-be achieve his goal. In the field, a Praetorian Prefect would be second-in-command if the emperor were present or sole commander if not.

Members of the Guard were given particular privileges indicated on a diploma signed by the emperor. Prior to 13 BCE, they served for 12 years while legionaries served 20 then; after reforms in 5 CE, Praetorians served for 16 and legionaries 25 years. The Guards also enjoyed over three times the pay given to ordinary legionaries. Their higher status was clearly signified when Augustus left each member 1,000 sestertii in his will compared to the 300 a legionary received. The Praetorians were also distinguished by their finer armour and oval shield, as opposed to the rectangular shield of other legions. They had their own standard when in battle, probably an eagle and wreath. As they served for a shorter period, Praetorian Guards were able to pursue higher military commands at a younger age, once discharged. They were also given other privileges by various emperors such as tax immunity by Vespasian on the land given at the end of their service. 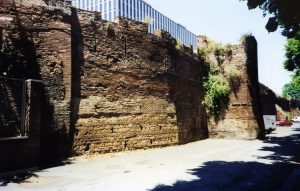 A section of the remaining walls of the castra praetoria, the camp in Rome for the Praetorian Guard from 23 CE.

Praetorian Guards largely came from either Italy or the fully-Romanised provinces to better ensure their loyalty. Three cohorts were stationed in Rome, and the rest remained in towns around the capital. This, and the avoidance of full uniform (but still carrying weapons) for those in Rome, was probably because of the Republican tradition that no commander’s army should enter the city. However, this situation changed in 23 CE when the Prefect Aelius Sejanus convinced Tiberius to permit the Guard to camp as a single unit in the castra praetoria in the north-eastern suburbs of Rome. Under Aurelian (r. 270-275 CE) the camp became part of the city’s fortification walls and its remains can still be seen today. The argument for a single camp was that if the Guard were all stationed together, then they would be better able to respond to an emergency, control any disturbances in the city, or simply act as a deterrent to any would-be conspirators. Whenever the emperor went on campaign in person, a detachment of the Praetorian Guard, led by one of the prefects, went with him.

As the imperial throne wobbled with ever-increasing intrigues the Praetorian Guard became an important factor in plots to usurp the emperor’s position. In 41 CE Claudius, after the murder of his predecessor Gaius (Caligula) by the Praetorian Guard (whose officers had been humiliated by him), sweetened the Guard by handing out large cash sums – 15,000 sestertii per man. Just to reinforce the relationship, Claudius then had a series of coins minted which depicted the Guard hailing him as emperor. Thereafter, every new emperor was careful to give the Guard a lump sum and the honour of an imperial address even if the Guard never actually held a formal position in the empire’s power structure or possessed any political leadership of any note. When the Praetorian Guard backed Otho against Vitellius in 69 CE and lost, the latter widened up recruitment to allow the best veterans from any legion to join. Vespasian attempted to ensure their greater loyalty by a different means, making his son, the future emperor Titus, a Praetorian Prefect.

By the time of Commodus in the late 2nd century CE the Guard had become an ill-disciplined liability. In 193 CE they murdered Pertinax – he had, after all, only offered them a paltry 12,000 sestertii each on his accession – and then gave their allegiance to anyone who could pay them enough, the winner being Didius Julianus. Didius offered to pay the enormous sum of 25,000 sestertii to every Guard member, the equivalent of 5-year’s pay, and when he was made emperor actually upped the reward to 30,000 per man. This dwarfed the 20,000 sestertii that Marcus Aurelius had given to each member when he had become emperor, although this was a genuine gift and not a bribe.

The power of the Praetorian Guard led to emperor Septimius Severus replacing the most notorious members with loyal legionaries from his Danube armies. Still, the Praetorian Guard would not go away as a powerful instrument of power, and in 217 CE, Macrinus, a praefectus praetorio, arranged the assassination of Caracalla and was declared emperor by his own men. Finally, Constantine I disbanded the Praetorian Guard in 312 CE after they had backed his rival Maxentius. The Praetorian Prefects would survive, though, as by now they had become important administrators of the regions of the East, Gaul, Illyricum, and Italy, a role they would continue to perform into the Byzantine period.

The Praetorian Guard and the Downfall of the Roman Empire

It was during the reign of Augustus’ successor Tiberius (AD 14 – AD 37) that the Guard truly came into its own as a power to make and unmake emperors. With the benefit of hindsight, it is arguable that the career of Sejanus foreshadowed the future. The head of the Praetorian Guard (AD 14 – AD 31), Sejanus allegedly plotted to overthrow Tiberius, and certainly monopolised power in Rome while Tiberius was in Capri. According to Josephus, Antonia, Sejanus’ mother in law who informed the emperor of the conspiracy, who responded by summoning Sejanus to a Senate meeting, officially to give him the powers of Tribune of the People. In reality, Tiberius had sent the Senate a letter ordering Sejanus’ arrest and execution.

The first time the Praetorian Guard effectively became the king makers of the Roman Empires was after the assassination of Tiberius’ successor, Caligula. According to Robin Lane Fox, this was the best opportunity in Roman history for the restoration of the Republic. The Praetorians however, famously found Caligula’s Uncle Claudius hiding behind a curtain, and proclaimed him emperor, forcing the Senate to accept him. Claudius paid the guards who had supported him handsomely, and the necessity of any Roman emperor to have the Praetorians supporting him was now well established.

The next time the Praetorian Guard played a decisive role in the imperial succession was after it deserted the Emperor Nero, and the Year of the Four Emperors began, (69 AD) however, when Nero’s first successor, Galba, failed to pay them enough, they assassinated him, and supported Otho, who gave them the right to choose their own prefects, in order to guarantee their loyalty. Ultimately this did not help them very much, and he was deposed by Vitellius.
Vitellius attempted to found his own Praetorian Guard, to avoid being dependent on the old one. However his new guard was of little help in dealing with Vespasian’s invasion, partly because Vespasian enlisted the former Praetorians. Vespasian (69 AD – 79 AD) was pragmatic enough to reduce the cohorts to nine, and appointed his son, the future emperor Titus (79 – 81 AD), as one of its commanders. Titus’ younger brother Domitian (81 – 96) was declared Emperor, and the plot to assassinate him involved members of the guard.
The five emperors (Nerva, Hadrian, Trajan, Antonius Pius and Marcus Aurelius) that followed Domitian are commonly known to history as the ‘Five Good Emperors’ and the palace intrigues and Praetorian partisanship that had characterised the Julio-Claudian and Flavian dynasties were for a time absent.

When Marcus Aurelius died in 180 AD, and his son Commodus became emperor, historians generally agree that the decline of the Roman Empire began. Edward Gibbon in particular considered the Praetorians to have played a role in the Roman Empire’s decline. An arguable example of this, is how during the rule of Commodus, the soldiers were given the right to hit anyone they encountered, and waves axes at people. Following Commodus’ assassination in 192 AD, his successor the emperor Pertinax was assassinated after a reign of only eighty-seven days, partly due to prohibiting the soldiers from being allowed to act as they liked. This was followed by one of the most remarkable methods of successions in history.

Didus Julianus (192-193), one of the two Consuls with Pertinax, went to the Praetorians’ camp, and offered them money in return for making him emperor. Pertinax’s father-in-law, the city prefect Sulpicianus was also present, and the two attempted to outbid each other, eventually, Sulpicianus offered 20,000 sesterces to every soldier, and Didus responded by offering 25,000, which won. He only ruled for 66 days however, and was overthrown in 193 AD by Septimius Severus. The Praetorians had become so accustomed to not actually fighting, that they offered little resistance.

Severus Alexander (222 AD – 235 AD), succeeded him, and despite having presided over one of the more effective Roman governments in the third century, with Domitius Ulpianus, the Praetorian prefect serving as de facto prime minister, the Praetorians killed him in 228 AD, and nearly killed the famous historian and then Consul Dio Cassius in 229 AD on the grounds that he was too severe. Severus Alexander saved Cassius’ life, but he himself was later assassinated by the army and was replaced by one of his commanders Maximinus Thrax (235 AD – 238 AD), beginning half a century of almost constant anarchy.
This only ended when the emperor Diocletian, (284 AD -305 AD) established the Tetrarchy, ending the Principate established by Augustus. By an interesting coincidence, he also effectively destroyed the Praetorian Guard as a force to make or break emperors. Augustus had created the guard to protect the emperor, and the imperial system that replaced the republic, instead, it ultimately contributed to it, and the empire’s downfall.