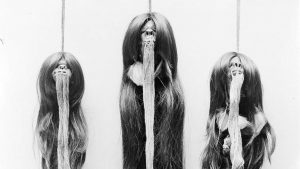 The shrinking of human heads was originally only practised by the Shuar people to trap the souls of their enemies, but tsantsas (shrunken heads) became a big trade thanks to the demand of European collectors leading to many fakes.

At some point in the mid-16th century, Spanish conquistadors entered the Amazon rainforest and came into contact with the Shuar people. In the epic colonisation of Latin America, one more indigenous group would not have made much of an impact had it not been for two factors: gold and tsantsas. To gain the former, the Spanish Empire tore up its initial peace agreements and subjugated the Shuar in a brutal mining system.

In 1599, The Shuar, among other tribes, revolted against the Spanish, sacked their towns and, as the story goes, to satisfy the insatiable lust of the Spanish governor, poured molten gold down his throat. The area never again came under complete colonial control.

To obtain tsantsas, subsequent expansionists took a different approach. From the 16th to the 19th centuries, collectors would routinely arrive in the borderlands of Ecuador and Peru, laden with money, weapons, or both, dead set on exchange. Europeans and Americans might by that time have grown to fear the Shuar, but they were still utterly obsessed with shrunken heads.

Despite that fact that tsantsas have only ever been produced by the Shuar people, it is often assumed that head shrinking was, and is, a globally ubiquitous phenomenon of indigenous groups: Papua New Guinea and parts of Africa being oft-ventured guesses. Yet aside from rethinking our assumptions of where they might be made, it’s also important to consider why.

The Spanish colonialists assumed the Shuar were a warlike people because of the 1599 revolt and because they shrank human heads – both, apparently, for no particular reason. However, while we now know the first was a legitimate act of anti-colonial resistance, we also know that the second was done for a very specific purpose.

Why Did the Shuar Shrink Heads? 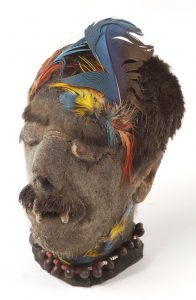 Central to historic Shuar belief systems is an adherence to the idea of multiple, yet interlinking, souls, and one of the most powerful is the vengeful soul. Traditionally, if someone were to be killed in battle, the greatest fear of the murderer would be that the dead person’s soul could wreak havoc upon them from the afterlife; in order to prevent this happening the soul would have to be trapped. As the Shuar believed that the soul resides within the head, the best way to do this was to shrink it.

While head shrinking may be a unique trait of Shuar history, heads have been removed from foes in numerous places, and in most cases they have been prominently displayed. At the Tower of London, heads of executed traitors were rammed onto spikes, and in medieval Japan those removed by samurai would be treated similarly. Not so with tsantsas.

Shrunken heads were produced to trap souls; once done, the soul had no way of escaping. The crucial part was not the end product but rather the process. As such, despite the fact that some heads would be paraded at feasts and hung up on display, others would be thrown away or even given to children to play with. In reality, a tsantsa only attained value as an object in itself when, akin to gold, it was integrated into the global networks of modern capitalism.

How Were Heads Shrunk?

Firstly, the head would be removed from the body and the skin of the face cut away from the skull. The skin would then be wrapped around a small wooden ball to keep its shape and simmered in a large pot of boiling water. The lips and eyelids were sewn shut so that the soul couldn’t escape.

The facial features would then need to be moulded back into the rubbery skin because the process of boiling would severely weaken their appearance. The tsantsa would then be decorated. 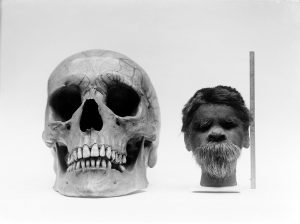 Henry Wellcome obtained the shrunken head normally displayed in Medicine Man from the Stevens Auction Room in 1925. It cost £25 but it’s entirely possible that wasn’t just for the head: Stevens was well known to bundle objects together if he knew Wellcome was interested. He would then hike up the price as far as he could. How the head got to the auction in the first place we don’t know, but by the end of the 19th century the Euro-American lust for tsantsas was so extreme that more were being produced for trade than for the trapping of souls.

Collectors would trade guns for heads and the guns would create heads to be traded for guns. For those that try to explain indigenous practice through colonial ideas of ‘modernity’ vs ‘backwardness’, this is problematic, because if head shrinking was a ‘backward’ practice, it was escalated far more by ‘modernity’ than limited by it.

Sorting the Real from the Fake

There is one final caveat. While the collecting of tsantsas was often very destructive, it would be a mistake to see the Shuar as just passive victims. One aspect of the trade can be better explained by our replica tsantsa than by the real one. The shrunken head in our handling collection is made out of animal skin but is otherwise produced in exactly the same way that a human one would be (and looks remarkably similar).

At the height of the 19th-century trade, wealthy collectors would often purchase tsantsas and put them on display, unaware that what they had been sold was made of animal skin. It’s estimated that this applies to 80 per cent of all shrunken heads ever displayed. Like most objects in Wellcome Collection, the tsantsa tells more than one story.