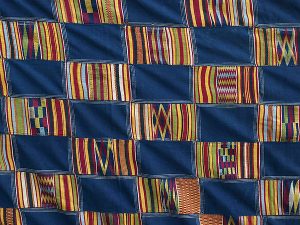 When early European explorers brought back souvenirs from their trips to the African continent they were regarded as curiosities and they didn’t find a home in art museums for centuries. Instead, these objects became part of natural history museums—along with fossilized remains, flora and fauna, and purely utilitarian objects. They were considered the man-made material remains of a culture. Clouded by the framework of  Social Darwinism in the 19th century and other beliefs that justified racial hierarchies, peoples of African, Pacific, and Native American descent were regarded as less civilized, even less human, and therefore attitudes about non-Western art were determined by pre-conceived ideas about race and were not thought of as “Art” in Euro-American sense. 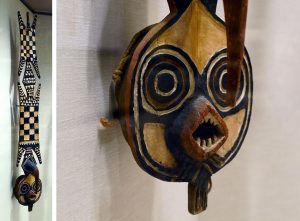 By the early 1900s however, these same objects that were initially regarded as artifacts of material culture, began to be exhibited in Western art museums and galleries as “art.” The objects themselves had not changed, but there was a shift in the attitudes and assumptions about what constituted a work of art.

To historicize this issue more, we can divide the history of the display and reception of African art into four periods. In the eighteenth century, objects like the ones illustrated here would likely be housed in a “curiosity cabinet”—in a private family parlor where trinkets and novelties acquired over generations, often while traveling, were displayed. The artist, culture, and function of these objects was often lost. By the nineteenth century, many of these curiosity cabinet collections were donated first to natural history museums where they were categorized and classified in the name of science along with flora, fauna, and skeletal remains. By the twentieth century, some of these same works were exhibited in fine art galleries and museums. Over time, African art has become widely collected and ever more popular. Today, African objects and their replicas can be found in retail stores, flea markets, and can be seen in Hollywood movies, television shows, and advertising. 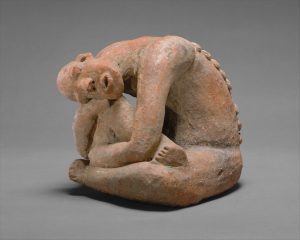 Some of the assumptions about what constitutes art is still very much a part of the Western aesthetic system. For example, “high art” is still thought of as painting and sculpture. Because many African artworks served a specific function, Westerners have sometimes not regarded these as art. It is worth remembering, however, that the concept of “art” divorced from ritual and political function, is a relatively recent development in the West. Prior to the 18th century, most artistic traditions around the world were functional as well as aesthetic, and arguments can be made that all art serves social and economic functions. The objects that African artists create—while useful—embody aesthetic preferences and may be admired for their form, composition and invention.

In the Eighteenth-century Europe, philosophers and critics constructed a definition of “art” in which the object was unique, complex, irreplaceable, inspired by the natural world, and with the exception of architecture, non-functional. In contrast, non-Western art was viewed as not unique, simply produced, replaceable, abstract, and utilitarian. Therefore, Non-Western art was not considered to be art.

Nineteenth century notions of art were redefined by theories of cultural evolution. Social Darwinism was used to support the claim that all cultures progress along an evolutionary ladder. Western culture was seen as the most advanced and inherently superior. Societies in Africa were viewed as more primitive, a state of being from which modern Western society evolved. Franz Boas in 1927 in his book Primitive Art shows that cultural evolutionism is seriously flawed. He argued that contemporary societies cannot be arranged on a ladder of “least evolved” or “most advanced.” Nor can their art. 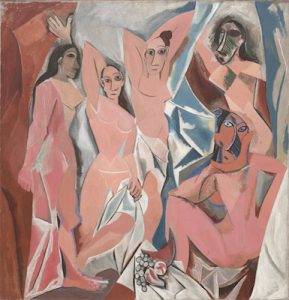 Anthropologists and art historians came to realize that non-Western cultures should not be judged according to the values of the West, leading to a reevaluation of the nature “art.” However, it was modern Western artists who brought non-Western objects into the popular imagination as works of art worthy of aesthetic consideration. Looking for a new way to represent modernity, artists such as Andre Derain, Amedeo Modigliani, and Pablo Picasso turned to non-Western art for stylistic inspiration. We see this in Picasso’s Les Demoiselles d’Avignon (above). The women’s faces on the right of the canvas have been painted as masks inspired by African artworks Picasso observed on his trip to the Trocadero Museum in Paris in 1907:

All alone in that awful museum with masks, dolls made by the redskins, dusty manikins. Les Demoiselles d’Avignon must have come to me that very day, but not at all because of the forms; because it was my first exorcism painting — yes absolutely!…The masks weren’t just like any other pieces of sculpture. Not at all. They were magic things. But why weren’t the Egyptian pieces or the Chaldean? We hadn’t realized it. ‘Those were primitive, not magic things. The Negro pieces were mediators. They were against everything — against unknown, threatening spirits. I always looked at fetishes. I understood; I too am against everything. I understood what the Negroes used their sculpture for. Why sculpt like that and not some other way? After all, they weren’t Cubists! Since Cubism didn’t exist.

In the quote above, Picasso recognized that the African and Amerindian artists whose work he saw at the museum in Paris were deliberately using abstraction. He doesn’t focus on why they chose this style but he adopts it, none-the-less, to pursue his own expressive interests. For contemporary avant-garde artists, African art offered abstraction as a strategy for the representation of modernity. The quote also tells us that Picasso, like many Western collectors, didn’t know much about the function, culture, or history of African objects and he seems to have focused on their purely formal properties. Picasso, Piet Mondrian, Constantin Brancusi, Georges Braque and other modernists helped Western viewers to see these objects as “art” but the cultural meanings of these works remained opaque. However, over the course of the nineteenth and twentieth centuries, scholars began to question social Darwinism and seek out indigenous interpretations of the form and function of objects.

Today, many contemporary African artists are influenced by tradition-based African art. African arts played a central role in their communities, whether to communicate royalty, sacrality, inner virtues, aesthetic interests, genealogy, or other concerns. As the art historian Robert Farris Thompson has argued for the Yoruba, African art is used to make things happen, it is efficacious and necessary for events like rituals, masquerades, and life cycle transitions to successfully occur.