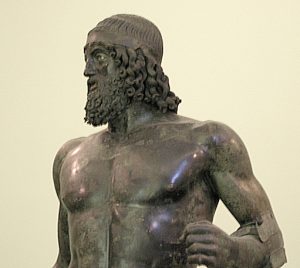 The Riace Warriors (also referred to as the Riace bronzes or Bronzi di Riace) are two life-size Greek bronze statues of naked, bearded warriors. The statues were discovered by Stefano Mariottini in the Mediterranean Sea just off the coast of Riace Marina, Italy, on August 16, 1972. The statues are currently housed in the Museo Nazionale della Magna Grecia in the Italian city of Reggio Calabria. The statues are commonly referred to as “Statue A” and “Statue B” and were originally cast using the lost-wax technique. 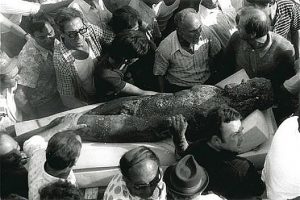 The discovery of the statues in 1972

Statue A stands 198 centimeters tall and depicts the younger of the two warriors. His body exhibits a strong contrapposto stance, with the head turned to his right. Attached elements have been lost – most likely a shield and a spear; his now-lost helmet atop his head may have been crowned by a wreath. The warrior is bearded, with applied copper detail for the lips and the nipples. Inset eyes also survive for Statue A. The hair and beard have been worked in an elaborate fashion, with exquisite curls and ringlets.

Statue B depicts an older warrior and stands 197 centimeters tall. A now-missing helmet likely was perched atop his head. Like Statue A, Statue B is bearded and in a contrapposto stance, although the feet of Statue B and set more closely together than those of Statue A.

The Severe or Early Classical style describes the trends in Greek sculpture between c. 490 and 450 B.C.E. Artistically this stylistic phase represents a transition from the rather austere and static Archaic style of the sixth century B.C.E. to the more idealized Classical style. The Severe style is marked by an increased interest in the use of bronze as a medium as well as an increase in the characterization of the sculpture, among other features. 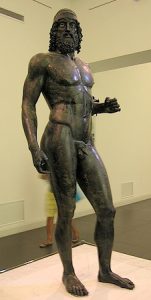 The chronology of the Riace warriors has been a matter of scholarly contention since their discovery. In essence there are two schools of thought—one holds that the warriors are fifth century B.C.E. originals that were created between 460 and 420 B.C.E., while another holds that the statues were produced later and consciously imitate Early Classical sculpture. Those that support the earlier chronology argue that Statue A is the earlier of the two pieces. Those scholars also make a connection between the warriors and the workshops of famous ancient sculptors. For instance, some scholars suggest that the sculptor Myron crafted Statue A, while Alkamenes created Statue B. Additionally, those who support the earlier chronology point to the Severe Style as a clear indication of an Early Classical date for these two masterpieces.

The art historian B. S. Ridgway presents a dissenting view, contending that the statues should not be assigned to the fifth century B.C.E., arguing instead that they were most likely produced together after 100 B.C.E. Ridgway feels that the statues indicate an interest in Early Classical iconography during the Hellenistic period.

In terms of identifications, there has been speculation that the two statues represent Tydeus (Statue A) and Amphiaraus (Statue B), two warriors from Aeschylus’ tragic play, Seven Against Thebes (about Polyneices after the fall of his father, King Oedipus), and may have been part of a monumental sculptural composition. A group from Argos described by Pausanias (the Greek traveler and writer) is often cited in connection to this conjecture: “A little farther on is a sanctuary of the Seasons. On coming back from here you see statues of Polyneices, the son of Oedipus, and of all the chieftains who with him were killed in battle at the wall of Thebes…” (Pausanias, Description of Greece 2.20.5). 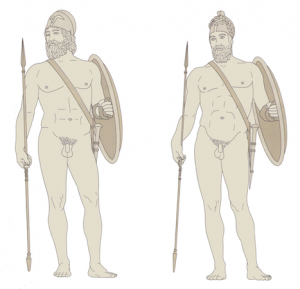 A conjectural restored view of the two warriors / By Leomonaci121198, Wikimedia Commons

C. C. Mattusch, “In Search of the Greek Bronze Original” in The Ancient Art of Emulation: Studies in Artistic Originality and Tradition from the Present to Classical Antiquity (Memoirs of the American Academy in Rome, supplementary volumes, vol. 1), edited by E. K. Gazda, pp. 99-115, (Ann Arbor: University of Michigan Press, 2002).