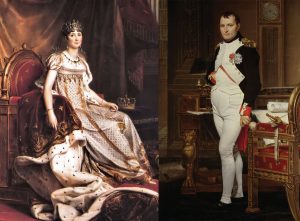 Every marriage is complex, this one more than most. At first glance, the 26 year old General, with his angular face and brusque manners, and the graceful queen of the brilliant but corrupt demi-monde of the late Revolution seem to form an odd couple. 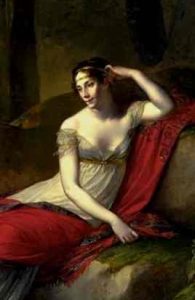 Dominique de Villepin, in Le soleil noir de la puissance, notes that they have much in common. Joséphine and Bonaparte are both uprooted aristocrats, torn between their respective native islands and France, between the nobility and the Revolution, both are consumed by ambition.

In 1795 Bonaparte meets Rose Tascher de la Pagerie, from a slave-owning family of the Martinique nobility. She is a widow with two adolescent children. Her husband, General Alexandre de Beauharnais, was guillotined during the Reign of Terror, and she herself went to jail then.

She is now the mistress of Barras, the nobleman turned revolutionary who rules France. And Barras is tiring of this spendthrift brunette on the eve of middle age, and not sorry to pass her along to his young military protégé.

Rose and Bonaparte become lovers. She, after years of unhappy marriage and various liaisons, takes things with quite a bit of detachment. But Bonaparte is enthralled, possessive. He cannot abide the name Rose, used by her prior lovers, and calls her Joséphine, after her second given name of Joseph.

Let us read this letter of his, from December 1795:

I awake full of you. Your image and the memory of last night’s intoxicating pleasures have left my senses no rest.

Sweet, incomparable Joséphine, what a strange effect you have on my heart. Are you angry? Do I see you sad? Are you worried? My soul breaks with grief, and there is no rest for your lover; but how much the more when I yield to this passion that rules me and drink a burning flame from your lips and your heart? Oh! This night has shown me that your portrait is not you!

You leave at midday; in three hours I shall see you.

Meanwhile, my sweet love, a thousand kisses; but do not give me any, for they set my blood on fire. 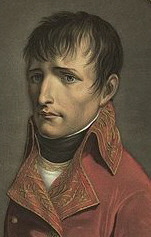 A month later, in January 1796, Bonaparte proposes. Joséphine has no money of her own and enormous debts, but she brings, courtesy of Barras, the best dowry an ambitious general can dream of: the command of the Army of Italy, the doorway to glory.

On March 9 1796 they wed in a civil ceremony. Here is the marriage certificate. Note a few interesting details. The bride states her birthdate as 23 June 1767 (in fact she was born in 1763). Josephine is indeed six years older than her husband, and she does not wish to advertise this fact. See her neat signature at the bottom: M.J.R. (Marie-Joseph-Rose) Tascher. And next to it, the groom, Napolione Bonaparte, signs as well. Nobody dreams of Napoléon yet, not even he himself. Barras is of course a witness, as well as other dignitaries of the regime. As for a religious ceremony, no one seems to think of it at the time.

Bonaparte, only days later after this hurried wedding, must rejoin his command in Italy. Thanks to blitzkrieg tactics, he achieves unlikely victories and garners fame at the head of his ragtag army. He writes his bride passionate letters:

I am going to bed with my heart full of your adorable image… I cannot wait to give you proofs of my ardent love… How happy I would be if I could assist you at your undressing, the little firm white breast, the adorable face, the hair tied in a scarf à la créole. You know that I will never forget the little visits, you know, the little black forest… I kiss it a thousand times and wait impatiently for the moment I will be in it. To live within Joséphine is to live in the Elysian fields. Kisses on your mouth, your eyes, your breast, everywhere, everywhere.

Joséphine’s feelings seem to be of a milder sort. She does not write much, if at all, and finds comfort in the arms of Louis-Hippolyte Charles, a dashing young officer of Hussards. Bonaparte’s brothers, who do not like their sister-in-law, are only too happy to report the bad news to the groom. He is torn between furious jealousy and enduring passion, and writes:

Soon, I hope, I will be holding you in my arms; then I will cover you with a million hot kisses, burning like the equator.

But the magic is gone. Joséphine is no longer the goddess of his dreams, she is a pretty woman like any other, and an unfaithful one at that. So much for the (foolhardy, in my opinion) theory that making a man jealous is the best way to increase his love. Bonaparte takes mistresses, and makes no mystery of it. Now it is Joséphine’s turn to become jealous, and her bitter scenes only drive her husband further away.

In 1798, Bonaparte, now campaigning in Egypt, writes his elder brother Joseph, I am much distressed by domestic matters. Divorce may already be on his mind, long before dynastic concerns make it a matter of political expediency.

He returns to Paris, where Joséphine awaits him. Their common ambitions effect a reconciliation: she is instrumental in the preparations of the coup of 18 Brumaire in 1799, which brings him to power. He now sees her not only as a valuable political ally, but also as his bonne étoile, the lucky star of his amazing career.

In 1804 he crowns her Empress, an honor denied most Queens of France, a token of his gratitude and their partnership on the arduous road to supreme power. Joséphine chooses the eve of the grandiose ceremony to reveal to the horrified Pope that he is going to anoint two persons who, in the eyes of the Church, are not even married. The Pope, predictably, demands that a religious marriage take place that very night, to Joséphine’s immense relief.

Joséphine is now in her forties, she is as graceful as ever, but she has given up hopes of presenting her husband with the heir he so wants to ensure the continuity of the Empire. Her daughter Hortense de Beauharnais has – very reluctantly – married Louis Bonaparte, Napoléon’s brother. The new Emperor is giving serious thought to the adoption of the couple’s eldest son, who is both his nephew and Joséphine’s grandson. Gossip even has it that Napoléon, not Louis, is the biological father of that child and his brother, the future Napoléon III, but this has never been proven, though Louis himself seems to have believed it. In any case this plan collapses, along with Joséphine’s hopes, when Hortense’s eldest son suddenly dies at the age of seven.

By then Napoléon no longer shares his wife’s bed, and he resolves at last on a divorce. The Senate decree that effects it is but a formality, and the religious marriage, contrary to Joséphine’s expectations, turns out to be no hurdle. An annulment, of dubious validity under Canon law, is granted by the diocesan tribunal of Paris in a matter of weeks.

The Château de Malmaison is a French château. It is located near the western bank of the Seine about 15 kilometres west of the centre of Paris in Rueil-Malmaison. / Wikimedia Commons

Joséphine retires with sadness and dignity to her country house of Malmaison. There she follows from afar the arrival of the new Empress, Marie-Louise of Austria, the birth one year later of Napoléon’s long awaited heir, then the collapse of the Empire and the first restoration of the Bourbons. She dies at the age of 50, apparently of pneumonia, after a walk in her beloved gardens of Malmaison with one last illustrious visitor, Czar Alexander I.

Like many true romances, this one has no happy ending. It remains that Napoleon’s very last word, on his deathbed on the faraway island of St. Helena, was, “Joséphine…”