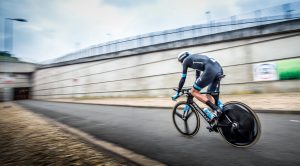 When you think about sports, do you consider the science behind it? Probably not.

Air and gravity affect a football’s spin and precision of throw. A batter must strike a ball at “the sweet spot” and hone in on the pitcher’s throw, even when the ball appears to have a mind of its own. Hockey pucks seem to magically glide across the ice while players in clunky gear push themselves powerfully and gracefully across the ice. A dancer must time their spins with precise push and pull or they risk spinning infinitely — or until human energy resources give out. How do they do that?

The Science of Football

So, physics does play an important role, but the quarterback’s handiness also remains important — it impacts the throw’s path. It makes the difference as to whether a successful pass happens or makes it an incomplete.

The Science of Baseball

How does Clayton Kershaw strike out 301 batters in a year? How does Barry Bonds make 71 home runs in a season?

Ever seen a ball swerve or duck at last moment like it had a mind of its own? How does that work? This has to do with sub-atomic particles smashing into each other as these particles rotate on their own axis like baseballs themselves.

Players want the ball to hit “the sweet spot,” otherwise the bat will violently vibrate or split down the middle. The sweet spot is the point where the bat best deflects the force’s energy, pushing the energy back into the ball, and sends it out farther in the opposite direction.

If the ball misses the sweet spot, the bat absorbs the bulk of the energy. The ball looks like it changes its mind at the last minute, swerving or ducking, because the pitcher focuses on the laws of momentum and movement — placing a subtle motion on the ball at the start of throw which continues to grow during the course of the ball’s route. A more unpredictable pitcher is likely to achieve more strikes.

The Science of Hockey

As you watch a player slide across the ice with their puck, stick and gear, you may wonder what goes into keeping all that in motion. Not only do hockey players receive recognition as tough athletes, but it takes years of training and skill to learn how to skate with an understanding that every action contains a precise reaction. Newton’s laws of motion apply to hockey, especially the third, since one has to push back to go forward. When you skate, you don’t swing your arms side to side. Your arms swing to and fro since it pushes you forward — equal and opposite reaction.

Did you know that a puck is typically frozen before a game? This causes less friction and allows the puck to cross longer distances. The player strikes the ice just behind the puck, bending the stick with their weight which lends it energy like a spring. As the blade’s face hits the puck, the player rotates their wrist to release the stored energy into the puck, optimizing the puck’s speed. After the player strikes the puck, its kinetic energy is equivalent to the hockey stick’s stored energy.

The Science of Dance

Not many people see dance as a sport, but it is rigorous and competitive with similar bodily demands, repetitive motion and degree of practice hours. Dancers must move into specific patterns which requires a strong frame and precision of movement — yet must remain graceful. Some dancers can move their feet nearly 15 miles an hour, turning them a hundred times a minute.

Newton’s first law of motion applies to a dance turn called “fouette,” which means whipped. The dancer makes the turn on a single leg while the other whips outward along their side and in toward their knee. The fouette must be controlled, or the dancer spins perpetually until they give out.

Newton’s third law of motion finds expression with the push and pull of the grand jete, or leap. The dancer plies, leaps from the ground and elongates their legs while in the air. The move ends with a plie. The action pushes the feet to the ground and the reaction results from the push into the air.

The science behind sports adds a whole new level of appreciation for the dedication that athletes put into their hard work. Whether in season or off season, attend a game or competition to show your support and share a science fact or two with a neighbor. With a little science-based knowledge, players achieve grand goals and inspire their fans.