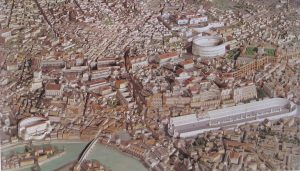 Think city living is a struggle today? The ancient Romans had it just as tough, giving their poets plenty to complain about

Roman poetry is filled with entertaining rants against urban evils, which I revisited with glee while preparing for a gallery class I taught at the Getty Villa last month.

Some of the most illuminating diatribes come to us from D. Iunius Iuvenalis (Juvenal), an embittered poet of the late first and early second centuries A.D. As translated by Peter Green, his verses showcase many of the irritants still encountered in city life today, from traffic jams to fashion requirements.

1. The Rent Is Too Damn High 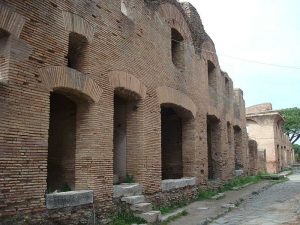 An insula dating from the early 2nd century A.D. in the Roman port town of Ostia Antica / Wikimedia Commons

Juvenal emphasized the excessive cost of living in the city, with rent easily adding up to the cost of a house one could have bought in a country town.

If you can tear yourself loose from the Games, a first-class
house can be purchased, freehold, in any small country town
at the price of a year’s rent, here, for some shabby, ill-lit attic.
(Juvenal, Satire 3.223–225) 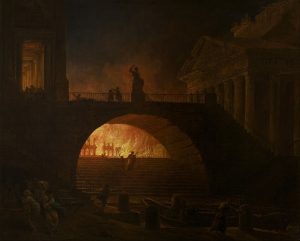 Cheap construction was another fear of the city dweller, and a reasonable one, since fires often started in largely wooden “high rises” of up to 5 or 6 stories.

Who fears, or ever feared, the collapse of his house in cool
Praeneste, or rural Gabii, or Tivoli perched on its hillside,
or Volsinii, nestling amid its woodland ridges? But here
we inhabit a city largely shored up with gimcrack
stays and props: that’s how our landlords postpone slippage,
and—after masking great cracks in the ancient fabric—assure
the tenants they can sleep sound, when the house is tottering.
Myself, I prefer life without fires, and without nocturnal panics.
(Juvenal, Satire 3.190–197) 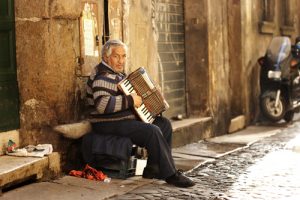 Almost as bad as fires resulting from cheap construction, Romans had to put up, like us, with street performers. To a poet, nothing was worse than hearing fellow (lesser) poets reciting in public in the hottest weather:

“. . . myself, I’d prefer a barren island to down-town Rome:
what squalor, what isolation would not be minor evils
compared to an endless nightmare of fires and collapsing
houses, the myriad perils encountered in this brutal
city, and poets reciting their epics all through August!
(Juvenal, Satire 3. 5-9)

You wonder why no people pay you heed?
Well, I’ll unveil the mystery—you read.
Incessantly you foist on us your rhymes,
a legendary peril of our times.
No mother tiger snarling near her cubs,
no snake attacking us despite our clubs,
no scorpion paralyzingly come near,
can deal us such humiliating fear
as you, in undeterr’d reciting mode
producing endless drivel by the load. . .
(Martial, Epigram 3.44) 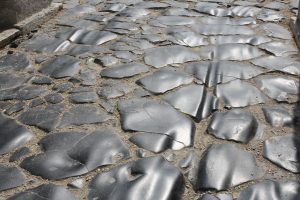 A section of a Roman road with a typical polygonal stone surface. The stones also show the ruts made by Roman wheeled vehicles. / Wikimedia Commons

And then there was the nighttime traffic. The noise at night in Rome could be deafening, because carts with produce and products were only allowed into the city after dark. The daytime streets were already too crowded. Only the wealthy with homes on a secluded hill could avoid hearing the noise of traffic all night long.

Insomnia causes most deaths here . . . Show me the apartment
that lets you sleep! In this city sleep costs millions,
and that’s the root of the trouble. The waggons thundering past
through those narrow twisting streets, the oaths of draymen caught
in a traffic-jam, would rouse a dozing seal—or an emperor.
(Juvenal, Satire 3.232–238) 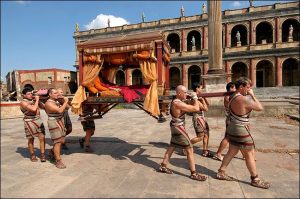 Patrician in his litter carried by slaves in the Roman Forum in front of what appears to be the Basilica Julia. From the HBO Epic about Rome

Daytime traffic was just as bad, especially for the pedestrian. The really rich were carried in commodious litters (curtained traveling couch-beds) by eight muscular slaves trained to move together to afford the most comfort to their masters.

If the tycoon has an appointment, he rides there in a big litter,
the crowd parting before him. There’s plenty of room inside:
he can read, or take notes, or snooze as he jogs along—
those drawn blinds are most soporific. Even so
he outstrips us: however fast we pedestrians may hurry
crowds surge ahead, those behind us buffet my rib-cage,
poles poke into me; one lout swings a crossbeam
down on my skull, another scores with a barrel.
My legs are mud-encrusted, from all sides big feet kick me,
a hobnailed soldier’s boot lands squarely on my toes . . .
(Juvenal, Satire 3.241–248)

And, of course, there was the need to dress fashionably in the city. For men, a toga was a burden dreaded more than a man’s wool suit today. This national formal (male) dress was the equivalent of a gigantic woolen blanket, carefully folded and draped, hard to clean (dry cleaners tended to use urine), and unbearably uncomfortable. Juvenal pretends that nowhere else were men stuck wearing this garment that announced both citizenship and (by its decoration) important distinctions in status.

Throughout most of Italy—let’s admit it—no one is seen
wearing a toga until he’s dead. Even on public
holidays, when last year’s shows are cheerfully staged
in the grass-grown theatre, when peasant children, sitting
on their mothers’ laps, shrink back in terror at the sight
of those gaping, whitened masks, you’ll still find the entire
audience—top row or bottom—dressed exactly alike.
Even the highest magistrates feel themselves entitled
to no better badge of status than a plain white tunic.
But in Rome we must toe the line of fashion, spending
beyond our means, and often on borrowed credit.
(Juvenal, Satire 3.171–181) 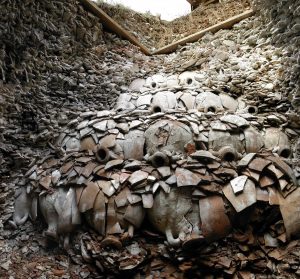 In one way, most modern urbanites have it far better than the Romans: we have indoor plumbing lacking in ancient apartment buildings. The Roman inhabitants of upper stories sometimes threw trash, garbage, broken pottery, and even the contents of their chamber pots out the window.

…it’s a long way up to the rooftops, and a falling tile
can brain you. Think of all those cracked or leaky vessels
tossed out of windows—the way they smash, their weight,
the damage they do to the sidewalk! You’ll be thought most improvident,
a catastrophe-happy fool, if you don’t make your will before
venturing out to dinner. Each open upper casement
along your route at night may prove a death-trap:
so pray and hope (poor you!) that the local housewives
drop nothing worse on your head than a pailful of slops.
(Juvenal, Satire 3.269–277)

Although ancient Rome offered its inhabitants many of the same irritants we complain about today, there are no parallels for some contemporary problems—like parking tickets, car alarms, and people who talk loudly on their cell phones in public. Which may be a pretty low price to pay for indoor plumbing.