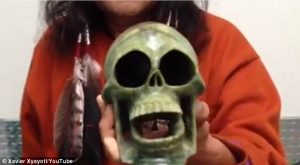 The Aztec death whistle produces a sound so horrifying, it will chill you to the bone. Described as the ‘scream of a thousand corpses’, the death whistle sounds like the cry of the un-dead, or the torment of a human being burned alive.

Interestingly, the skull-shaped whistles were discovered 20 years ago by archaeologists, but were dismissed as mere toys. Most studies focused on how they looked, but no one really thought to blow into them. Now that the fearsome sound of the whistle has been discovered, it is attracting the attention of scientists, musicians and historians alike.

According to 66-year-old mechanical engineer Roberto Velazquez, who has spent several years recreating the sounds of his pre-Columbian ancestors, the Aztecs played the mournful ‘Whistles of Death’ just before they were sacrificed to the gods. Some historians believe that the Aztecs used to sound the death whistle in order to help the deceased journey into the underworld. Tribes are said to have used the terrifying sounds as psychological warfare, to frighten enemies at the start of battle. 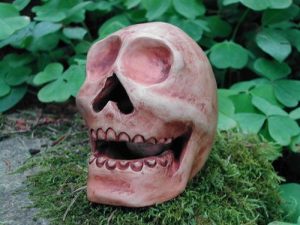 Archeologists have also discovered the existence of other types of noisemakers that were used by the Aztecs, made of clay, turkey feathers, sugar cane, frog skins and other natural materials – each one served a specific purpose. Conch shells, for instance, were sounded at the beginning of ceremonies, while hunters used animal-shaped ocarinas to produce grunts that lured deer. Medical doctors believe that the Aztecs may have used sounds to cure illnesses. But it is the death whistle that generates the strongest reactions, because of the creepy sound it makes when blown into.

Chances of getting your hands on a genuine Aztec death whistle are pretty slim, but luckily, you can hear its unique shrieks in the YouTube videos of musician Xavier Quijas Yxayotl. “I want to share with you this very unique instrument,” he says before starting his macabre solo. “We call this the ‘death whistle’ that the Aztecs used for special ceremonies – for day of the dead celebrations, and also they use when they have a war, when they fight with other tribes. They play over a hundred instruments, a hundred death whistles marching to cause a big psychological effect to the enemy.”

He then proceeds to blow into the whistle, and let me tell you, it isn’t recommended for the faint of heart ! Just don’t use it as your ringtone unless you want to give someone a heart attack.