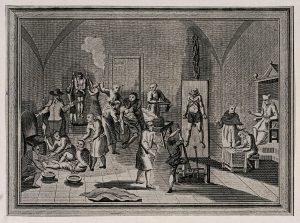 The inside of a jail of the Spanish Inquisition, with a priest supervising his scribe while men and women are suspended from pulleys, tortured on the rack or burnt with torches. / Wellcome Library, Wikimedia Commons

Catholics and Protestants did their fair share of torturing and murdering their opposites in the sixteenth and seventeenth centuries.

The Spanish Inquisition was a Catholic tribunal founded on a temporary basis in France and Germany. Its purpose was to seek out heresy, prosecute and punish it. In the thirteenth and later centuries how you decided to worship God in Europe was not optional. Heretics were severely punished, often capitally, by burning alive. The latter is probably the most painful way to die, but the Church believed that only by burning could the non-conformist devil in a person be driven out and destroyed. 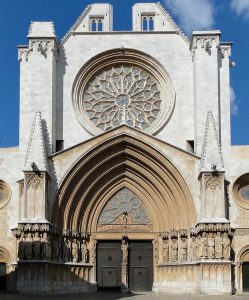 The country of Spain, and later its empire, is chiefly associated by historical novelists with the Inquisition, also known as the ‘Holy Office’ or Santo Oficio. A medieval inquisition was set up in the kingdom of Aragon, with headquarters in Tarragona, but this was superceded in the late fifteenth century by the newly invented Castilian or Spanish Inquisition, founded by a papal bull by Sixtus VI in 1478. The branch was devoted first and foremost to investigating how converted Jews and Muslims were behaving now that they were Christian. The Spanish Jews and Muslims of Castilla had been forced to embrace Christianity in the stern form of Catholic Faith in 1492 and 1502 respectively. 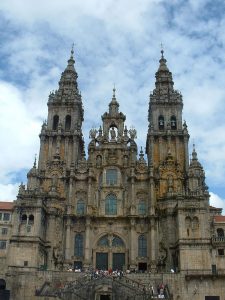 There were sixteen inquisitional courts extant in the Spanish peninsula, eleven of them founded by 1500, three by 1526 and one (in Santiago de Compostela, Galicia) in 1574. Madrid’s was the last to be established, in 1640. Contemporary historians secretly recorded that in its first ten years of existence the Inquisition burned around two thousand heretics and punished some fifteen thousand more. Portugal, meanwhile, had no medieval inquisition. Attempts by religious and political authorities to set one up failed until one tribunal was created on a temporary basis in 1539. Then another papal bull was promulgated in 1547 (by Pope Paul III) instituting a permanent tribunal. But the Portuguese inquisition seemed more interested in judging the population of Goa and later Brazil than in the mother country. 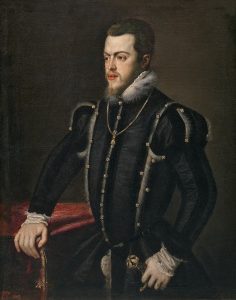 It is likely that Englishmen, threatened by no less than three Armadas sent to invade England by the Spanish Catholic King Felipe II, were more afraid of an English inquisition if he should succeed than by the prospect of England becoming Spanish.

The Spanish Inquisition was introduced into Perú in 1570, and in Mexico one year later. In Spain itself the Holy Office survived until the early nineteenth century. It was at last abolished in 1834. In the film world the Inquisition has always been heavily criticised – even lampooned. It appears as monstrously cruel, typically Catholic, in Fire over England (1936) with the young Olivier, and in The Name of the Rose (1986) with a not so young Sean Connery and almost the first appearance of a very young Christian Slater. The British never had an inquisition as such, but both Catholics and Protestants did their fair share of burning their opposites in the sixteenth and seventeenth centuries, without the need of an inquisition to question them first.

Originally published by General-History under the terms of a Creative Commons Attribution-NonCommercial-ShareAlike 4.0 International license.