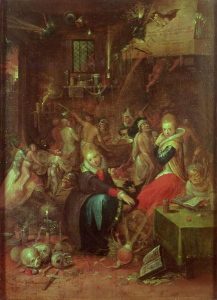 Anne Armstrong was a servant-girl.

Probably just a teenager in 1673, she lived at Birches Nook in Northumberland. She also, in the dark seasons of 1672 and early 1673, had a series of terrifying supernatural experiences. So she said.

Anne gave her testimony in a string of statements made over the winter and spring of 1673, to officials of the assizes. Perhaps under questioning from magistrates, she went into an increasing amount of detail. A chilling series of nocturnal encounters were described with frightening vividness.

The first one, just before Christmas, had all started when she was sent out to buy groceries.

Haggling with Anne Forster over eggs, Forster apparently performed a trick by ‘looking’ at Armstrong’s head. Three days later, when she was out in the fields, Armstrong was approached by ‘an old man with ragg’d clothes’ who told her that Anne Forster would make a horse of her spirit and ride her.

Sure enough, over the next few days, Anne Armstrong fell into a series of trances. On one occasion, Anne Forster rode her like a horse, cross-legged to Riding Mill, just down the road. Here she saw a group of local people (all those named were women), as well as a ‘long black man rideing on a bay Galloway, as she thought, which they calld there protector’. He was the Devil himself. Anne was forced to ‘sing while they danced in severall shapes’: a hare, then their own shape, then a cat, sometimes a mouse, and then other animals. Then they rode home.

Another nocturnal sabbat took place in February. Here, the protector ‘which they call’d their god’ sat at a golden chair, a rope hung over the room, and when the witches touched it three times a series of dainty dishes would appear.

Then, in April, we get even more information. The witches would be rewarded for their evil deeds, so they queued up to tell the protector of their acts of maleficium (harm through magic). Pulling on the rope, more food appeared. A capon boiled in a plum broth, a bottle of wine, a cheese, wheat flour, butter, currants, sack, a ‘flackett’ of ale, a quarter of mutton, beef, yet more wheat flour ‘for pyes’ (the Devil evidently didn’t believe in ready meals).

There was yet more dancing, in the shapes of cats, hares, and even bees. Strikingly, the witches were divided into five ‘coveys’ (covens), each with thirteen members.

The acts of maleficium recounted were many and varied: injured cows, sick neighbours. George Stobbart’s goods had been wasted to the tune of £100: a serious amount of money in 1670s Northumberland. The miller had proved a problem, but they’d managed to get his shirt off him ‘as he was lyeinge betwixt two women’, and this had apparently allowed them to bewitch his mill-gear, which had gone haywire.

Horses, though, seem to have been the main targets. They were pined to death, and drained with blood. One witch told of how she’d been drinking wine in Frank Pye’s cellar in Morpeth, the Thursday after Fasten’s Eve, and she’d ‘witched suddenly to death her neighbor’s horses in Pruddoe’. Two witches, Michael Ainsley and Anne Dryden had even taken control of Mr Thomas Errington’s horse (he was the owner or Riding Mill; Mr Errington, not the horse) and ridden behind it disguised as bees, eventually engineering its premature death.

Some of the witches had even taken leases of their lives from the Devil. Anne was offered one of sixty years, during which time she would never want for gold or money, or alternatively she would get a cow, which would provide as much milk as ten cows.

Called again to give evidence, this time in late April, Anne recounted another sabbat. This time she wasn’t sure where it was, though it was somewhere to the south. In May, she told how the witches carried her to Berwick Bridge, where one of them told of entering the house of John Maughen ‘and found his wife’s rocke lyinge upon the table. And she tooke up the rocke to spinne of it, and by spineinge of the rocke she had gotten the power of the said Anne that she should never spinne more, and would still torment her till she had her life’ (this was a reference to her distaff, the use of which was known as spinning ‘on the rock’; it was perhaps a symbol of female independence).

A smattering of neighbours came forward to testify that, yes, there had been some strange goings on in the village. Bumps in the night, mills apparently possessed, and lots of dead animals. There was also a hint that things might be spreading. Anne was brought to nearby Allendale, ‘by the parishiners for the discovery of witches’. Here she outed one Isabel Johnson as a witch. By complete coincidence*, Johnson had indeed been suspected by her neighbours for several years. 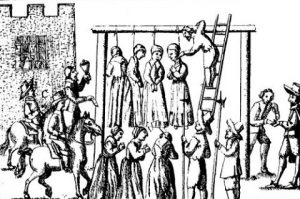 The hanging of the Newcastle witches, 1650. A recent memory in 1673. / Wikimedia Commons

These are some of the strangest witchcraft testimonies in England’s history. They came at a time when witch trials were on the way out. Legislation in 1542, 1563, and 1604 had established witchcraft as a secular crime, and there had been panics and persecutions in the 1640s and ‘50s, including a notorious one in Newcastle. But after the Restoration, an apparently more sceptical judiciary were making successful prosecutions more difficult. In fact, it appears there were no convictions in this case, and possibly not even any indictments. The testimony was – by the standards of the age – as frail as the young servant who gave it. Had Anne been a male and a member of the social elite, the story might have been different.

In the broader history of English witchcraft, Anne Armstrong’s testimony is especially important though, because they contain one of the few references to the witches’ sabbat. Despite it being a staple of continental trials, in England the focus tended to be on maleficium. As James Sharpe has pointed out, these statements suggest some popular belief in the sabbat, perhaps imported from Scotland, but clearly closer to local traditions than the writings of professional demonologists.

But there is, I think, a lot more we can take from the case. Of course, we have to be wary about speculating about the cosmos of a witness like Anne, not least because she isn’t writing down her thoughts herself. Her mind is mediated through the questions of the magistrate and the pen of the clerk. But, read closely and read carefully, there’s a lot we can see.

Hers is a peasant world. It’s a world of cows and mills and horses and spinning on the distaff. A world of unexplained sickness. A world which stretches to Morpeth and Allendale, but not much further (the reference to Berwick Bridge is interesting – is this the Berwick on the Scots border, or is it a more local placename that I’ve not found yet?).

The height of opulence, brought by the Devil’s magical rope, was to eat plum-baked capons, currant-bread, beef-pies and mutton.

It is also, perhaps, a young person’s world. The contracts with the devil are, for me, especially striking. Of course, witches were sometimes accused of forming sexual liaisons with Satan. The diabolic pact was often sealed in copulation. Not for Anne, though. Here, the demonic pact was a lease for lives. Like a contract on land, perhaps, or – more pertinently for Anne – like a contract of service, where a master would offer payment and food for a term of years.

I also, though, think that Anne’s testimony is a fantasy. In fact, it’s a fantasy about social inversion. 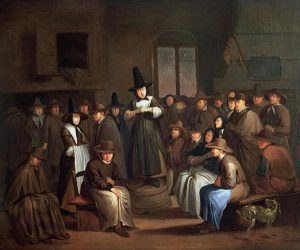 I know what you are going to say. This is what I write about everything. This is what historians like me, in the tradition of ‘history from below’, write about everything. Of course this is all speculation, but part of the role of the historian is to suggest things; everyone else can then accept or rubbish them. What I’m offering here is a suggestion.

Look again at the evidence: there’s an awful lot of social uncertainty, even social levelling.

The witches are (mostly) empowered women. The boundaries between man and beast are blurred. At least two of the victims of maleficium were wealthy: Mr Thomas Errington of Riding Mill was a gentleman; George Stobbart was wealthy too. Two more were yeomen, a status of some standing in the pasture-farming north. The control of horses is interesting too: the horse was a symbol of gentility, the ability to control it represented good governance, hence the fashion for equestrian portraits amongst monarchs and the social elite. For two peasants to take control of a gentleman’s horse was a levelling gesture.

Where did this all come from? Inversion is as old as time. But I don’t think this is ‘carnivalesque’ inversion, it’s not fun, or based on mocking and laughter. It’s a world in which boundaries and binaries are unhinged. It’s scary rather than scurrilous.

My take is that this is a post-revolutionary inversion fantasy (wow that sounded pretentious, but I’m going to stick with it).

I’m not saying anything as simple as that Anne was a conservative, or a radical. I’m saying that when she imagined diabolism and witchcraft, she did so with one eye on the frightening social upheaval that happened, or had just happened, when she was a child.

Anne will have grown up with stories of religious meetings in isolated places (conventicles, rather than covens, of course), of female prophets, of levellers and of ‘strange newes’. She will have heard of battles over Lent (the period after Fasten Eve), and she will have heard people rail against dancing. A group of women getting together and dancing, while plotting the destruction of their powerful neighbours, will have felt like the essence of subversion, and very exciting. Her image of the witches’ sabbat, in fact, isn’t that different to the well-known depiction of a Ranter meeting, where participants greet each other as ‘Fellow Creature’. The phrase at the bottom, ‘let us eat while they dance’, is not a million miles away from Anne’s claim that the witches ‘made her singe to them whilst they danced’.

And Anne will, of course, have heard a lot growing up about someone called ‘The Protector’. 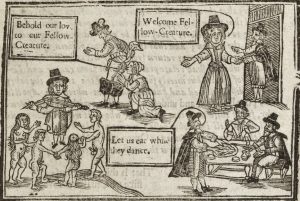 I don’t think Anne is making a political point, not at all. But I think she was in a world where social upheaval, religious uncertainty, and levelling were recent and raw. I think that her testimony about witches contains echoes of her own childhood memories of monsters, religious conventicles, and Protectors. It could be a scary world, perhaps it was a traumatic world, but it was also one where power and hierarchy was uncertain. Perhaps her fantasy is also about the possibilities of empowerment? Perhaps there is a hint of excitement. Perhaps much more than a hint.

Or, maybe I’m being unfair. Maybe it’s all true and the witches were real.