Popular in the European Middle Ages, the bestiary is a type of illustrated manuscript that describes and depicts beasts of all kinds. Even though each animal story has a Christian moral, some of the stories may surprise today’s reader with their violent and sexual plots. The beaver hunt, for example, is a thrilling, vicious tale still relevant to our daily lives.

The Hunt for Castoreum

The beaver’s legend is one of humorous misfortune, as well as bravery and sacrifice. Throughout the Middle Ages, beavers were hunted for their castor sacs, which produce castoreum, an oily substance used for medicinal purposes. During the hunt, the beaver was said to take it upon himself to bite off his testicles in order to end the chase. He reveals to the hunters that he does not have them, and is spared.

The beaver’s castor glands were thought to be connected to its testicles, but are actually located internally. The word castor is the Latin term for beaver, and castoreum is the substance secreted by both male and female beavers to scent-mark their territory. While castoreum might sound like it is related to the word castration—which coincides with the beaver’s tale—it actually comes from the Sanskrit term for musk. 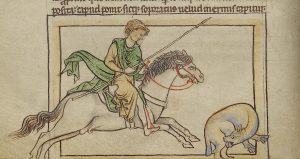 A Beaver (detail) in the Northumberland Bestiary, about 1250–60, unknown illuminator, made in England. Pen-and-ink drawing tinted with with body color and translucent washes on parchment, 8 1/4 × 6 3/16 in. The J. Paul Getty Museum, Ms. 100, fol. 11v. Digital image courtesy of the Getty’s Open Content Program

In the medieval bestiary the beaver is usually illustrated at the high point of his tale, in the midst of biting off his testicles. However, some illuminations depict the beaver already castrated, with his testicles midair, as he reveals himself to the hunter in hopes of ending the chase. The beaver is rarely depicted in a realistic manner in bestiaries—its elongated body, thin tail, and extended legs more closely resemble a fox.

Throwing Vice at the Devil

The story of the beaver biting off his glands goes as far back as Egyptian hieroglyphs, where it alluded to the punishment for adultery. When adapted for the Christian bestiary, the beaver’s tale took on a different message. The beaver hunt reminds man that if he wishes to live chastely and without sin, he must cut off all vices that could influence immoral behavior, and throw them at the devil. By doing so, the devil will leave him alone. If the devil comes back to pressure acts of evil, man will reveal that he has cut off his vices and no longer has any desire to sin.

Interestingly, the beaver’s tale retains relevance to our lives today. We still use the beaver’s musky, vanilla-scented castoreum in perfume, medicine, and even, rarely, food. The Food and Drug Administration considers castoreum as natural flavoring and has approved it as a legal food additive. Who knew the beaver was the virtuous hero we all need! 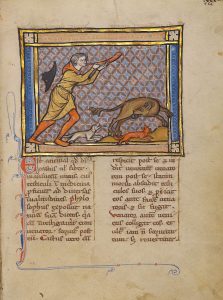 A Beaver in a bestiary, about 1270, unknown illuminator, possibly made in Thérouanne, France. Tempera colors, gold leaf, and ink on parchment, 7 1/2 × 5 5/8 in. The J. Paul Getty Museum, Ms. Ludwig XV 3, fol. 83. Digital image courtesy of the Getty’s Open Content Program