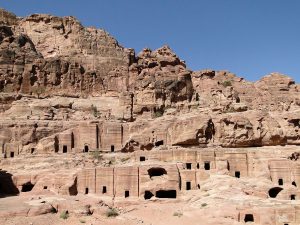 Petra became the center of trade between the Middle East and the Roman Empire.

The ancient Jordanian city of Petra was literally carved into the rose-colored sandstone in the desert canyons and mountains of what is now the southwestern corner of the Hashemite Kingdom of Jordan. Between 400 B.C. and A.D. 106., Petra was a thriving trade center and the capital of the Nabataean empire. The Nabataeans were masters of water technology who designed and built tunnels that supplied water throughout their city.

Petra became the center of trade between the Middle East and the Roman Empire, which brought wealth and power to its people and provided resources for the construction of elaborate tombs, monuments, and structures that turned the desert into a vibrant, multicultural city. The ancient city of Petra was an international hub for the exchange of goods as well as ideas and culture, which led to the unique style of art and architecture seen there. Although their homes were simple structures, the Nabataeans began incorporating the ideas and styles of their trading partners into their tombs and monumental architecture. Throughout Petra, the architectural style was a blend of Assyrian, Egyptian, Hellenistic, and Roman influences. 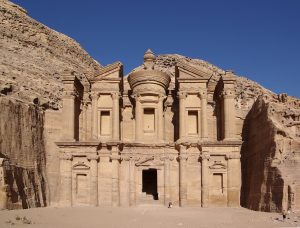 One of the best known architectural structures at Petra is called the Treasury. It’s called this because locals once believed that it contained hidden treasure. A giant urn carved into solid stone above the Treasury’s entrance is marked with hundreds of gunshots, possibly inflicted by thieves trying to steal the supposed treasure inside.

Archaeologists today consider the Treasury to be a royal tomb. It’s two stories tall, with a facade that measures 82 feet wide and 128 feet high. It incorporates Corinthian and Nabataean columns as well as enormous friezes carved from solid rock. Several figures adorn the monument, including both Nabataean and Greek gods and goddesses, as well as characters from Greek mythology. 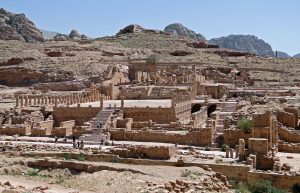 The Great Temple is another impressive structure at Petra that was influenced by Ancient Roman architecture. This two-level temple, which dates from the first century B.C., contains a small theater that was large enough to seat 600 people.

The theater space may have been used for religious ceremonies. The Great Temple remained hidden under dust and rubble until 1992, when it was rediscovered by archaeologists from Brown University. So far, the Great Temple is the largest freestanding building that has been found in Petra. It covers an area of 25,000 square feet and was once 60 feet tall.

During the Roman era, ornate columns lined the street surrounding the Great Temple. After Rome took possession of Petra in A.D. 106, its importance in international trade began to decline and the city of Petra gradually fell into a state of decay. The city sat empty and in near ruin for centuries. Much of the “lost city” of Petra is still underground, and archaeologists continue to excavate its remains.