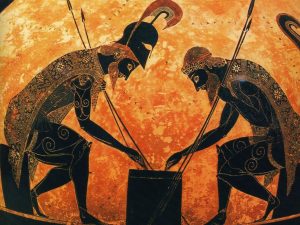 In 508/7 B.C., the statesman Kleisthenes proposed a set of reforms that re-organized the Athenian citizens into 10 tribes (phylai). In order to prevent the people living in any one geographical area from becoming dominant, each tribe was composed of citizens from the city, the coast, and the inland areas of Attica. Athenians served in the Council (boule), on juries, and in the military according to their tribes. The tribes also had their own officials, sanctuaries, and religious calendars. Therefore, membership in a tribe was very important for political, social, military, and religious reasons, and the tribal structure was one of the essential elements of early Athenian democracy (demokratia) and equality under the law (isonomia).

The 10 tribes of the early Athenian democracy were named after 10 mythical heroes, selected by the oracle of Apollo at Delphi from a much larger, preliminary list of names provided by the Athenians. Each hero was represented by a bronze statue on the Monument of the Eponymous Heroes in the Athenian Agora. Important information pertaining to each tribe was posted beneath the relevant statue, and the Monument of the Eponymous Heroes became an important public “bulletin board” and meeting place. The original 10 ten tribes and their heroes were:

Athenian citizens (adult males only) served in the Council (Boule) according to tribe. In the early democracy, the Boule was composed of 500 members (50 from each of the 10 tribes).  In addition, each tribe would take its turn at being the chair or “presidents” (prytaneis) for about a month at a time. However, the order in which each tribe served as “presidents” was not always the same. On the other hand, the tribes are listed in a regular, set order on various official documents (e.g., casualty lists, public decrees).

The names of the tribes and their regular order are represented by this mnemonic phrase (taking the first 2 or 3 letters of each name):

Of course, the political structure of Athens was not static, and the number of tribes changed over time reflecting different political diplomatic relationships. For example, in 307/6 B.C. the Athenians paid honor to two Macedonian kings, Antigonos I Monopthalmos and his son, Demetrios Poliorketes, by creating two new tribes (Antigonis and Demetrias) named after them. Two statues were added to the Monument of the Eponymous heroes (bringing the number to 12). The new tribes were added to the front of the list:

In 224/3 B.C. another Hellenistic king, Ptolemy III Euergetes of Egypt, was added to the list of heroes (13). The new tribe of Ptolemais was inserted into the 7th position:

When war broke out between Athens and Macedon at the end of the 3rd century B.C., the two “Macedonian tribes” (Antigonis and Demetrias) were removed from the list (and monument) of eponymous heroes (11).

This situation seems to have lasted only a few months. In 200 B.C., King Attalos I of Pergamon, who had helped the Athenians against Philip V of Macedon, was named an Eponymous hero (12 again). This new tribe (Attalis) was placed at the end of the list:

The number of tribes remained stable until 124/5 A.D., when the Roman emperor Hadrian was named an eponymous hero (bringing the the total up to 13 again.). The new tribe was inserted into the 7th position:

Many of these changes can be noted in the archaeological record of the Monument of the Eponymous Heroes, since the base had to be modified to accommodate the changing number of statues.