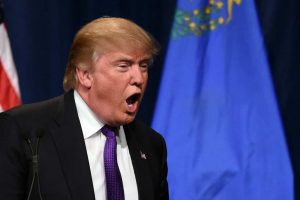 The legendary anthropologist and expert on primates made some interesting remarks to The Atlantic prior to Trump officially being crowned as the Republican nominee at the GOP Convention in July.

In Trump, Goodall sees a male chimpanzee trying to gain dominance by making as much noise as possible.

In many ways the performances of Donald Trump remind me of male chimpanzees and their dominance rituals,” Goodall said. “In order to impress rivals, males seeking to rise in the dominance hierarchy perform spectacular displays: stamping, slapping the ground, dragging branches, throwing rocks. The more vigorous and imaginative the display, the faster the individual is likely to rise in the hierarchy, and the longer he is likely to maintain that position.”

Clearly, that was exactly the case within the Republican Party as Trump threw his shit at every single one of his GOP rivals and continued winning primaries in state after state despite being the most outrageous candidate in the field.

Now he thinks he can do the same thing against Hillary Clinton to win the presidency in November. But first, Trump will have to debate Hillary, assuming that he doesn’t pull out of the debates like the coward he is.

Goodall plans to watch the debates with rapt attention because she thinks Trump will act like a chimpanzee named Mike.

According to The Atlantic, Goodall said:

In her book My Life With the Chimpanzees, Goodall told the story of “Mike,” a chimp who maintained his dominance by kicking a series of kerosene cans ahead of him as he moved down a road, creating confusion and noise that made his rivals flee and cower. She told me she would be thinking of Mike as she watched the upcoming debates.

Indeed, Trump has made “creating confusion and noise” the centerpiece of his campaign, most recently by trying to blame Hillary Clinton for the rise of birtherism despite the fact that Hillary, nor her campaign, ever leveled such charges against President Obama. Trump has also made outrageous claims about Hillary’s health and said that her Secret Service detail should disarm themselves to see how long she lasts before being killed.

Trump hopes that being the loudest and most obnoxious candidate will secure victory on Election Day. But Americans really need to ask themselves: Do we want a firestarter chimpanzee at the helm or do we want a civilized human being. Do we want to revert back into acting like apes, or do we want to continue to evolve? The choice is ours.