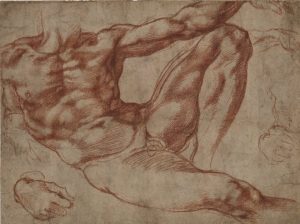 Studies of a reclining male nude: Adam in the fresco ‘The Creation of Man’ on the vault of the Sistine Chapel. c. 1511. Michelangelo. © The Trustees of the British Museum

Here are the facts behind four commonly held beliefs about Ancient Greek sexuality. 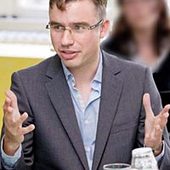 While we gaze at serene marble statues on display – straining male torsos and soft female flesh – are we seeing what the ancients saw?

The question I’m asking here isn’t a philosophical one, but rather it’s to do with our expectations and assumptions about beauty, sex appeal and sex itself. The feelings that beautiful faces and bodies rouse in us no doubt seem both personal and instinctive – just as they presumably did for the ancient Greeks who first made and enjoyed these artworks. But our reactions are inevitably shaped by the society we live in.

Greek attitudes towards sex were different from our own, but are all those myths about the sex lives of the ancient Greeks true? And how does this affect how we view the art?

Here are the facts behind four commonly held beliefs.

Greek men were all bisexual 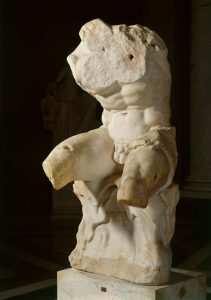 It was certainly the norm in ancient Greece for a man to find both sexes attractive. But the private lives of men in classical Athens – the city we know most about – were very different from anything that a “bisexual” man might experience today.

Relationships between men of the same age were not at all common: rather, the standard same-sex relationship would involve an adolescent boy and an older man. Men also used female prostitutes regularly: sex could be brought cheaply in a city that was home to countless brothels, streetwalkers and female “entertainers”. As for marital relations, men seldom married before the age of 30, and apart from the wedding night, it was common for married couples to sleep apart.

These different sexual relationships are captured in classical vase painting in strikingly different ways. For same-sex relationships, the focus is typically on the courtship; for prostitution, it’s on the sexual act; for marriage, it’s on the moment when the groom leads his new wife home.

This is largely true. A girl’s father traditionally saw it as his duty to find a suitable husband for his daughter and, importantly, would generally have played a role in finding a wife for his son as well. In Athens, a girl generally got married at about 16 – typically to a man twice her age, often a paternal uncle or an associate of her father’s. 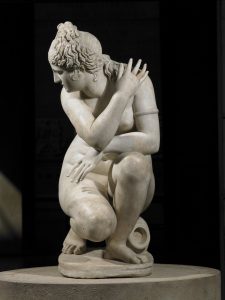 These arrangements might be expected to lead to unhappy marriages, but we do find examples of loving couples. In terms of art, what I find particularly touching are the tender portraits of wives on tombstones, where women are characteristically displayed as faithful, loving mothers.

The Greeks liked their boys young

Just as young brides were sexy, it was as adolescents that males were found attractive by other men. A boy’s sexual allure began to diminish the moment he started to grow facial and body hair and this short window of attractiveness perhaps explains the ecstatic reception that poster-boy youths like Charmides received. According to Plato, everyone at the wrestling school gazes at Charmides “as if he were a statue” and Socrates himself “catches fire” when he sees inside the youth’s cloak.

Apoxyomenos. Bronze, Hellenistic or Roman replica after a bronze original from the second quarter or the end of the 4th century BC. © Tourism Board of Mali Losinj

For all that Charmides and other hotties – both male and female – are described as “beautiful” and “pretty-faced”, Greek authors rarely mention specific facial features. We have little idea what eye-shapes or lip-shapes were found attractive, for instance. Is there a connection to be made between this lack of interest in faces and the serene – some would say, blank – expressions we find on many classical statues?

In addition to gym-fit, smooth-skinned youths, Greeks also admired the physique of adult men – as the statues of athletes, gods and heroes in Defining Beauty show. Athens’s answer to Miss World was a male beauty contest, the Euandria, a contest of “manliness” where contestants were judged on their bodily strength and ability as well as their looks.

The Greeks knew how to party

The symposium (an all-male drinking party) was one occasion when Greeks would let their hair down. This was an opportunity for men and older youths to bond and was highly erotically charged. Guests would flirt with each other, with slaves pouring the drinks, and there would be female prostitutes hired as “entertainers” for the evening.