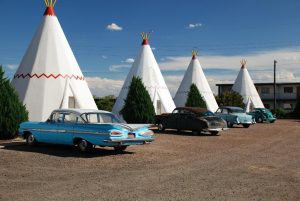 The Wigwam Motel in Holbrook, Arizona, is one of the few remnants of America’s mid-20th century motel boom. / Library of Congress

In 1939, when John Steinbeck imagined Highway 66 as “the road of flight,” he evoked the crushing realities of Depression-era migrants who’d been pushed off their land by failing crops, relentless dust and heartless banks.

Struggling to find some sense of home on the road, these environmental and economic refugees searched for hope against a backdrop of unfathomable loss. On the road to California, they’d rest and recuperate in army surplus tents, hastily constructed Department of Transportation camps and Sears Roebuck chicken-coop cabins.

They could hardly imagine the surreal indulgences of the tourist road that would begin to emerge after World War II: renting a room built to resemble a country cottage and adorned with plastic flowers; snapping photos of a neon cactus glowing through half-drawn window shades; sleeping in a concrete tepee appropriated from Native American culture.

They could, in short, never foresee the rise of the roadside motel.

But after its heyday in the mid-20th century, the traditional mom and pop motel – once ubiquitous along American highways and byways – has largely slipped from the public imagination.

As Mark Okrant writes in “No Vacancy: The Rise, Demise and Reprise of America’s Motels,” approximately 16,000 motels were operating in 2012, a sharp drop from a peak of 61,000 in 1964. In subsequent years, that number has surely declined further.

Even so, efforts to preserve mom and pop motor lodges – particularly along Route 66, “the highway that’s the best” – indicate a desire among many historians and motorists to reclaim something of the motel spirit not yet entirely lost.

Before the motel…the farmer’s field?

To understand America is to travel its highways.

In the first three decades of the 20th century, America cemented its love affair with the automobile. For the first time, most people – no matter their struggle or station in life – could hop in their cars, hit the road and escape from the places and circumstances that bound them.

Of course, there were few of the amenities available to today’s interstate traveler. West of the Mississippi, camping was the most common alternative to expensive hotels. For motorists who didn’t wish to traipse across stuffy lobbies in road-worn clothing, the convenience and anonymity of a field or lake shore was an attractive option.

Back east, tourist homes provided another alternative to hotels. If you look around in dusty attics or antique shops, you can still find cardboard signs that advertise “Rooms for Tourists.” For example, the Tarry-A-While tourist home in Ocean City, Maryland, advertised, “Rooms, Running Water, Bathing From Rooms. Apartments, Modern Conveniences. Special rates April, May, June and after Labor Day.” 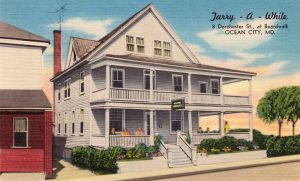 Because tourist homes were frequently located in town, they differed from most contemporary motels, which are often found near highways, away from the city center. However, each tourist home was as unique as their owners. In this, they contributed to a central tradition of the American motel: mom and pop ownership.

Fill up your tank and grab a bite to eat

As the Depression wore on, it became profitable to offer more amenities than those available at campsites. Farmers or businessmen would contract with an oil company, put up a gas pump and throw up a few shacks. Some were prefabricated; others were handmade – rickety, but original. In the book “The Motel in America,” the authors illustrate the typical visit to a “cabin camp”:

“At the U-Smile Cabin Camp…arriving guests signed the registry and then paid their money. A cabin without a mattress rented for one dollar; a mattress for two people cost an extra twenty-five cents, and blankets, sheets, and pillows another fifty cents. The manager rode the running boards to show guests to their cabins. Each guest was given a bucket of water from an outside hydrant, along with a scuttle of firewood in the winter.”

By the 1930s and ‘40’s, cottage courts (also known as tourist courts) emerged as a classier alternative to dingy cabin camps. Each cottage was standardized along a theme, like “rustic or “ranch,” and most were built around a public lawn. As the English Village East in New Hampshire’s White Mountains advertised: “Modern and homelike, these bungalows accommodate thousands of tourists who visit this beauty spot in Franconia Notch.” 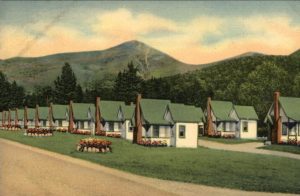 Unlike downtown hotels, courts were designed to be automobile-friendly. You could park next to your individual room or under a carport. Along with filling stations, restaurants and cafes began to appear at these roadside havens.

The rise of the motel

During the 1930s and ‘40’s, individual cabin camp and cottage court owners, known as “courtiers,” dominated the roadside haven trade (with the exception of Lee Torrance and his fledgling Alamo Courts chain).

For a time, courtiers lived one version of the American Dream: home and business combined under the same roof. Then, during World War II, almost everything road trip-related was rationed, with tires, gasoline and leisure time at a premium. But many troops traveling across the country to be deployed overseas saw parts of America that they would later want to revisit upon their return.

After the war, President Dwight D. Eisenhower, frustrated by the difficulty of moving tanks across the country, promoted a plan that mimicked the German autobahn: the Federal Interstate Highway System. But the first of these four-lane highways would take over a decade to build. Until then, families took to whatever highways were available – cruising over rolling roads that followed the curves and undulations of the countryside. Whenever it suited them, they could easily pull off to visit small towns and landmarks.

At night, they found motor courts – no longer isolated cottages, but fully integrated buildings under a single roof – lit by neon and designed with flair. They would soon be referred to as “motels,” a name coined by the owner of the Milestone Mo-Tel (an abbreviation of “motor hotel”) in San Luis Obispo, California.

While motel rooms were plain and functional, the facades took advantage of regional styles (and, occasionally, stereotypes). Owners employed stucco, adobe, stone, brick – whatever was handy – to attract guests.

With families swarming to and from the rest stops that multiplied along the highways of postwar America, many of the owners settled in for a life’s work. 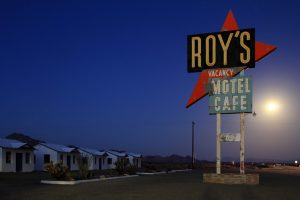 The good times wouldn’t last. Limited-access interstates, built to bypass congested downtowns, began to snake across the nation in the 1950s and 1960s. Before long, small-time motor courts were rendered obsolete by chains like Holiday Inn that blurred the distinction between motels and hotels. Single-story structures gave way to double- and triple-deckers. The thrill of discovering the unique look and feel of a roadside motel was replaced by assurances of sameness by hosts from coast to coast.

Today, with most travelers using the Interstate Highway System, few people go out of their way to find roadside motels. Fewer still remember the traditions of autocamps and tourist courts. However, a growing number of preservation societies and intrepid cultural explorers have begun to hit the exits and travel the original highways again – exploring remnants of Route 66, Highway 40, and U.S. 1 – searching for that one singular experience just around the bend.

No place to escape

You could argue that the decline of mom and pop motels signifies something else lost in contemporary American life: the loss of friction, of distance, of idiosyncrasy. In my book “City Ubiquitous: Place, Communication, and the Rise of Omnitopia,” I write of a nation defined less by travel than by the illusion that one may gather up all the world – all the same and dependable parts of it, at least – and navigate its safe interiors without fear of surprise. 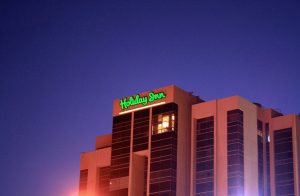 There is pleasure – and some degree of satisfaction – in this fantasy. But there is something missing too. I don’t necessarily want to call it “authenticity.” But we might imagine motor lodges – those of the past and those that remain today – as representative of a pleasant and peculiar fantasy of freedom: a way to escape the global continuum of constant flow and effortless connection. They’re a departure from the script of everyday life, a place where travelers can still invent a new persona, a new past, a new destination.