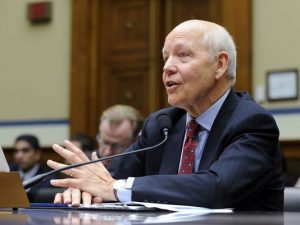 The Republican witch hunt to make the IRS commissioner pay for…something… backfired in spectacular fashion after Democrats, insulted at having been dragged into this show trial, took the opportunity to instead flip the script.

During IRS Commissioner John Koskinen’s hearing, Democrats began ignoring the “impeachment” nonsense and focused entirely on getting to the bottom of Donald Trump’s numerous tax scandals, including specific questions about his tax returns and charity fraud.

Of particular interest was Trump’s stated excuse for not releasing his tax returns because he is under audit. Tax experts have long noted that this argument is complete nonsense. An audit does not preclude the ability to show the American people your finances before an election. The head of the IRS – who presumably knows a thing or two about this – agreed.

“Is there anything that would prohibit someone from releasing tax returns, if they want to, because they’re under audit?” Rep. Jerry Nadler, a Democrat from New York asked.

Another Democratic representative asked it another way.

“Would releasing the person’s tax return during the audit in any way impact that pending audit of the return?” Rep. Ted Deutch asked.

“The release itself wouldn’t. The concern sometimes by taxpayers is that when the information is public there may be more information that will be discovered or provided,” Koskinen said.

In other words, Trump was worried that releasing his tax returns could make him look bad, or possibly allow nosy reporters to find even more criminality that the IRS missed the first time. This answer actually confirms what Trump’s son suggested to reporters in an unusual break from his dad. It wasn’t the audit that scares Trump, it’s that reporters seeing the tax returns would allow them to discover what’s in them and that would destroy his father’s chances of becoming president.

It may be for this reason that Trump has hinted he will only release his tax returns after the election. It won’t matter then.

The beatings continued in earnest while Republicans were forced to sit there with “What have we done?” expressions painted on their faces.

Democrats then went on to highlight some of the items that could prove problematic for Trump to disclose, such as his actual income, what he pays the government in taxes, clues to his actual net worth and records of his charitable giving.

Rep. Zoe Lofgren (D-Calif.) wondered aloud if discovering payments by Russia might suggest a monetary ― or even treasonous ― motive for going soft on a U.S. rival.

Several also raised the recent reports of Trump using his tax-free foundation to to buy paintings and sports memorabilia, to fund political campaigns and to pay business expenses.

“Is it appropriate for a foundation to give political donations?” asked Rep. Sheila Jackson Lee (D-Texas).

The answer was no.

Rep. Luis Gutierrez smiled in the face of Republican discomfort at the questions while munching on a bag of Skittles (a not-so-subtle nod to Trump Jr.’s recent comparison of Syrian refugees to poisoned candy). He later clarified that, unlike some people, he wouldn’t stop eating Skittles if he got a bad one.

It was not a good day to be a Republican lawmaker.

The impeachment hearing, widely agreed to be a dog-and-pony show, came after Republican leaders managed to stop an embarrassing impeachment vote on the House floor which would have humiliated the GOP with yet another stark example for the American voters of how frivolous and dysfunctional the party has become. They settled for grandstanding.

So with the knowledge that Republicans were wasting everyone’s time, Democrats decided to use those wasted hours to highlight just how corrupt Donald Trump is. Waste not, want not.