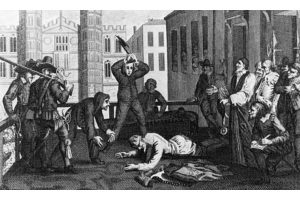 Execution of King Charles I

There is a folktale, dating from the early English settlements in Massachusetts, of the Angel of Hadley. The story goes that the remote pioneer village of Hadley was attacked by an overwhelming force of Algonquin warriors and faced certain annihilation. When all seemed lost, a mysterious figure appeared with flowing white hair and beard, brandishing a sword. Exhibiting considerable military prowess, the stranger marshaled the townsfolk into an effective fighting force. The enemy was repelled and the town saved. As soon as the battle was over, the stranger disappeared as quickly as he had come. Afterwards, the God-fearing people of Hadley put their rescue down to an avenging angel sent by God. 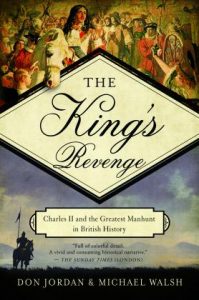 Today, there is debate about whether the attack took place or not. But what interested us as historians—and what inspired our latest book, The King’s Revenge—was that there existed a real-life candidate for the angel: a former Cromwellian general by the name of William Goffe, who had sat as a judge in the court that sentenced Charles I to death. Following Charles II’s ascension to the throne, the general became a wanted man and fled to Massachusetts. British troops were dispatched to find him and bring him back to face trial for treason. Unknown to the people of Hadley, their Puritan pastor hid the runaway in the attic of his house for many years. If the attack really occurred, then the former English Civil War officer would have been the ideal candidate to lead the townsfolk in battle.

This story let us to wonder about all sixty-nine men who had determined the execution of King Charles I. How many, like the soldier in Massachusetts, had fled? Where did they run to, and were they pursued? How many stayed in England to state their case and face the probability of death? How many were executed? How many were imprisoned? These were among the questions thrown up by the tale of the avenging angel. And so we decided to follow that lead and research the fate of the men who became known simply as the regicides.

Several months after the execution of Charles I in 1649, his eldest son, Charles, the Prince of Wales, wrote from exile in Holland, vowing vengeance on those blamed for his father’s death: “[W]e shall therein by all ways and means possible endeavour to pursue and bring to their due punishment those bloody traitors who were either actors or contrivers of that unparalleled and inhuman murder.”

Of course, the prince had no means by which to carry out his threat. He lived on the charity of the ruling families of Europe and, as continental states gradually came to terms with republican England, was increasingly isolated. This all changed in the summer of 1660 when Charles was invited to return and take up the throne. Catapulted into power, he could at last do something about those who had brought about his father’s death.

The story of the ensuing retribution is essentially that of an unrelenting manhunt for everyone who had signed Charles I’s death warrant, plus a few more whom Charles II wanted rid of.

Today we know a great deal about the frivolous side of Charles II but we know less about his more ruthless side, which saw him callously send his political enemies to the scaffold. Fresh insights into his character may still be found. Contemporary parliamentary records reveal a new role for Charles: that of interrogator. In late 1660, just a few months after ascending to the throne, the king went to the Tower and interrogated prisoners accused of treason. According to reports, the notoriously lazy monarch was a dab hand at drawing out confessions.

Fortunately for the modern historian, the seventeenth century saw an explosion of the written and printed word: official records of all types, contemporary memoirs, newspapers, propaganda sheets, personal diaries and letters, plays and poems. Thanks to this desire to record events, we have a greater idea of the events of the time, including — perhaps most exhilaratingly — documentation that brings to life the world of espionage. From papers held at the Public Record Office at Kew, spymaster Sir George Downing — “that perfidious rogue,” as Samuel Pepys described him—is revealed to us in all his brilliant treachery. We see him plan with ruthless efficiency to go to the Continent and kidnap his former friends and bring them back to be executed for treason. We see a honeytrap set by Aphra Behn, the Mata Hari of her day, successfully turn a republican exile into a spy for the House of Stewart.

The surviving documentation of the time also reveals the unsavory side of statecraft and the law. One account of the court that was set up to judge the alleged regicides reveals that it was fixed, sending men to their death on specious charges and insufficient evidence. In a fit of hubris, the king’s counsel John Kelying wrote a legal memoir in which he recalled how judges and prosecutors got together beforehand to rig the rules in order to meet their own ends.

In dealing with our large cast, we have had to be wary of the sometimes misleading nature of the accounts. For example, Lucy Hutchinson’s famous memoir of her husband, Colonel John Hutchinson, one of the men who signed Charles I’s death warrant, needs to be approached with caution. It gives a sanitized version of how her husband evaded the death penalty after the restoration. Edmund Ludlow’s published memoirs were thought to be entirely by his own hand until his original manuscript, titled A Voyce from the Watchtower, was discovered at Warwick Castle in 1970. Thanks to the detective work of Dr. Blair Worden, we now know this was from Ludlow’s original manuscript and that the memoirs as previously published were a radically rewritten version by a different hand in order to present Ludlow as more of a late-seventeenth-century Whig and less of the religious radical he was in real life.

Sometimes historical characters are fascinating because of their opacity. By far the most impenetrable character we encountered in our work was George Monck, a professional soldier who had first plied his trade for the House of Stuart. He later became one of Cromwell’s most trusted commanders. After Cromwell’s death, his career took a further twist: he helped to crush all parliamentary and army opposition in order to pave way for the return of Charles II. It is hardly surprising that opinions differ on Monck’s motives. In this case, as with the rest of the historical records, we were careful to view everything in context and draw our own conclusions, as history may not always be what it seems at first glance.