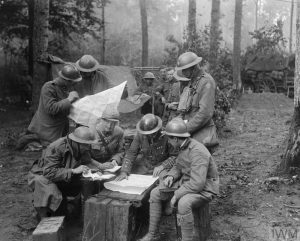 This photograph was taken by an official British war photographer, Thomas Keith Aitken, in July 1918. It shows officers of the 62nd Division of the British Army consulting with French and Italian officers during the Battle of Tardenois. / British Library, Public Domain

The private and public use of photography in World War One and its value as a historical source. 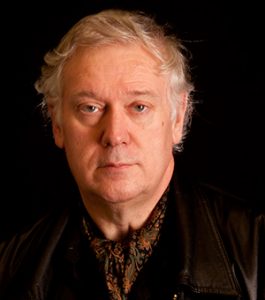 Photography in the First World War was made possible by earlier developments in chemistry and in the manufacture of glass lenses, established as a practical process from the 1850s onwards. The first commercially successful mass produced cameras, for which the user took the photographs and then sent the film to a developer to be processed, appeared in the 1880s. Photography was a growing popular hobby by 1914, chiefly among the middle classes. Some mass-circulation newspapers printed photographs as part of their news coverage, for which they employed professional photographers. Many soldiers going off to the war had a photograph taken of themselves in uniform, often a studio portrait taken by a professional; many also carried a photograph of a loved one with them. But most people were still rather formal and camera-conscious, and smiling for the camera was not usual.

Photography and the War 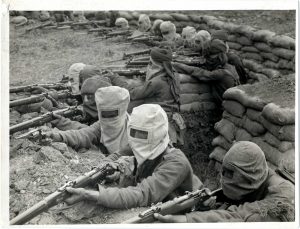 There were obvious security risks for any country that photographs taken in a war zone could give information to the enemy. A small number of amateur photographers, usually officers, took their cameras with them to war, using them to make a private record. Stories circulated that any soldier owning a camera or taking a photograph in the front lines would be court-martialled and shot. Although this was quite untrue, the possession or use of a camera by a fighting soldier in the early part of the war depended on the tolerance of his superiors. On the Western Front, press photographers were excluded by all sides early in the war, although some found a way round this. The Canadian professional photographer Charles Hilton De Witt Girdwood managed to reach an agreement with the British government’s India Office to film and photograph Indian troops on the Western Front in 1915. From 1916 onwards official restrictions on taking private photographs were increasingly enforced, and a few soldiers were court-martialled for owning cameras in a war zone. Photography also had many military applications, and most armies and navies had specialist units dealing with reconnaissance or topographical photographs, some of which were released to the public and the newspapers. On the Western Front, from early 1916 the British, French and German armies all employed official photographers subject to military control, to take photographs for release to the newspapers and for other propaganda purposes including photographic exhibitions, and to provide a historical record of the war. Away from the Western Front a more relaxed attitude often prevailed, with commercial or press photographers reaching agreements similar to Girdwood’s with the military authorities of various countries. On the Home Fronts, where photography was much easier than in a war zone, newspapers and government propaganda organisations made photographic records of the civilian contribution to the war. 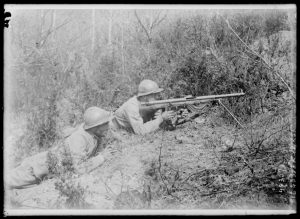 Literally millions of photographs have survived from the First World War, ranging from those used for official propaganda purposes to those preserved in private albums, forming a considerable historical record. The camera could not lie, in the sense that it would record what was in front of it; but all photographs were the product of a selection process, starting with what the cameraman thought was appropriate and technically possible. Photographers practised self-censorship, mostly on grounds of culture and propriety, but also security and belief in a cause. A photograph could also be highly misleading if its caption gave a false provenance or location, so that it seemed to show something that it did not: a training exercise could be misrepresented as a real battle. Captions for photographs published during the war were also censored. But photographs also automatically recorded social history: how people dressed, what they wore, what their buildings and streets looked like. Often, a photograph provides the critical evidence for a moment that has otherwise been missed from the history of the war. Taken together, the photographic record tells a very important part of the war’s story.