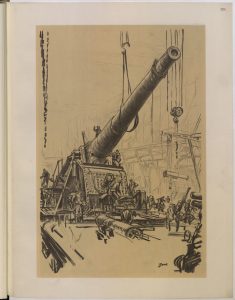 British and Belgian artists of World War One, from Henry de Groux and his eyewitness responses to the Belgian invasion, to the later generation of British artists who transformed their frontline experiences into abstract, modernist artworks. 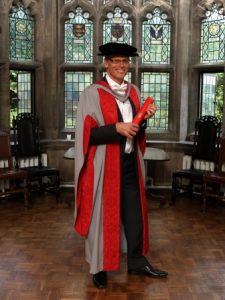 Why paint war: why send artists to the battlefield when a camera could capture the face of conflict so much more convincingly than a painter with a canvas and brushes? The question is as timely now as it was when war broke out in Belgium in 1914.

Quick to spot a propaganda coup, German and French artists accompanied troops to the front, making spontaneous sketches and watercolours of soldiers as they engaged with the enemy en masse. Belgian artists fled into exile, many taking refuge in London where they gathered and started to recreate harrowing visions of the overthrow of their country. Many British artists volunteered, some joining the Artists’ Rifles, an officer training battalion in the County of London Regiment. Others opted for the field ambulance units or the Red Cross; the young Modernist painter ‘Richard’ Nevinson (Christopher Richard Wynne Nevinson) had a nerve-shredding experience in the makeshift casualty clearing stations behind the battlefields, confronted by hundreds of dead and dying wounded soldiers. Painter Eric Kennington joined the London Regiment and served in the snow-covered trenches near Laventie in France in terrible conditions.

The British Response – The Scottish Etcher 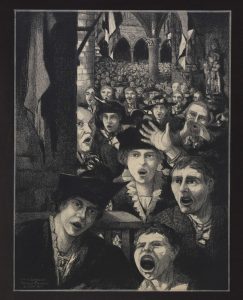 Unlike the systematic response of the German government, the British reaction was rather slow. A War Propaganda Bureau had been created in 1914 as a part of the Foreign Office. Its task was to generate literature that promoted Britain’s interest and might sway neutral nations – principally the USA – to enter the war on the Allied side. Concentrating on pamphlets and books, its meetings were attended by such leading Edwardian authors as Rudyard Kipling, G M Trevelyan and H G Wells. However, it was not until May 1916 that the first official war artist, Muirhead Bone, was commissioned.

A distinguished Scottish etcher more used to drawing industrial and architectural scenes than distant battlefields, Bone was nicknamed the ‘London Piranesi’ for his ability to depict vast and complex construction sites, shipyards, cathedrals and docksides.[1] Nothing daunted him. But on the static battlefields of the Western Front he struggled to locate the face of modern war; it was elusive, distant and nocturnal. By daylight, the battlefield, or what he could safely see of it, was empty and deserted, with tens of thousands of combatants secreted in the trenches or hidden far behind the lines. At night it was crowded with activity but too dark to draw. Like the few official photographers who had been sent before him, he became frustrated at the huge scale of the war on the Western Front with its ‘Figures scattered, atmosphere dense with haze and smoke – shells that would simply not burst when required. All the elements of a picture were there, could they but be brought together and condensed.’[2]

Bone worked diligently in demanding conditions. In a six-week period he produced over 150 highly finished drawings, many depicting the systematic ruination of the French countryside, though often there was little left to see. Disappointed by their deadpan realism some critics were rather dismissive. ‘It is like looking at war through the wrong end of a telescope’ scoffed one. Another commented, rather wittily, that his portrayals were simply too accurate and his fine charcoal and ink drawings were dismissed as being ‘too true to be good’.[3]

However, Bone’s work was widely featured in government publications and his graphic style reproduced well on the war-rationed newsprint of the day. His drawings were highly regarded as pictorial propaganda and exhibited in Britain and the USA, where tens of thousands of people flocked to see them.

Above all, Bone’s work was authentic. It was he said, ‘War, as it is’. By comparison some of the leading photographers of the day, frustrated by the absence of suitably dramatic subject-matter on the battlefields, committed the ultimate transgression: a number of them created their own imaginary compositions by combining negatives one on top of another to create a composite vision of the reality of trench warfare. The resulting images were widely criticised for being contrived: they were deemed to have broken a sovereign rule of documentary reportage.

Belgian Artists as Witnesses of War 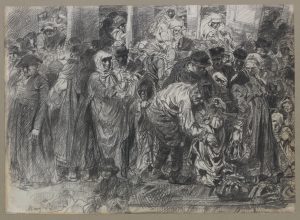 Eye-witness experience was regarded as a critical factor in the authority of official war art. This lent an added quality to the work of the many Belgian artists who had witnessed the violation of their country in the opening months of the war. Gisbert Combaz was a Belgian doctor of law, an artist and professor in the decorative arts. On 25 August 1914 German soldiers burnt down the city of Leuven after killing hundreds of civilians. In highly graphic detail Combaz described the population fleeing from the city with flames visible in the background of the drawing. Other Belgian artists drew upon second-hand accounts to conjure up images of the impact of war. Henry de Groux was a Belgian symbolist painter and sculptor, who was deeply disturbed by the reports of death, maiming and ruination that filled the newspapers; combined with his own eye-witness accounts he created a series of drawings, etchings and lithographic prints about the atrocities of the war. They have an immediacy and an intensity of representation which is instantly convincing.

The Second Wave of British Artists 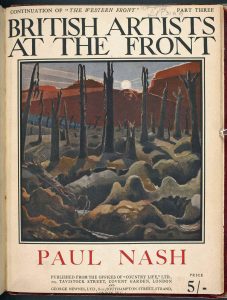 British Artists at the Front was a publication series created in 1918 by Wellington House – also known as the War Propaganda Bureau – featuring works by British war artists such as Paul Nash / British Library, Public Domain

In Britain, the popularity of draughtsmen such as Muirhead Bone convinced the British government to be bolder and to commission a second wave of artists. Under the auspices of the Ministry of Information, and guided by leading authorities from the arts and museum services, a younger generation of painters was commissioned, many of whom had recent front-line experience. Amongst these artists were those who would shape modern British art in the decades to come – Paul Nash, Percy Wyndham Lewis, William Roberts, David Bomberg, Stanley Spencer. However by 1916, perhaps the two most memorable British paintings to have emerged from the war were by those who had first volunteered for the Front – Eric Kennington’s reverse painting on glass ‘The Kensingtons at Laventie’,[4] and Richard Nevinson’s ‘La Mitrailleuse’,[5] a daringly modern canvas of French machine-gunners. When the latter was first exhibited, in early 1916, attendants had to be placed on either side to keep the queues moving past it. For a short while, Nevinson became the enfant terrible of the British art scene. He met the essential criteria of the war artist: dogged, dangerous, inspirational; capable of rendering the dreadful nihilism of the war in an uncomplicated figurative form that blended realism with geometric modernism. Above all, he had unchallengeable authority, his reputation as a painter underpinned by proven credentials. [6]