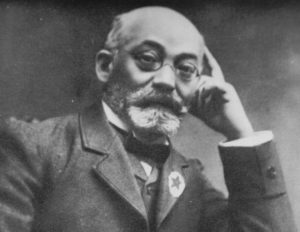 It was a noble idea.  Who knew that such tragedy would spring from it?

When L._L._Zamenhof developed the artificial language known as Esperanto, he intended it as a method of international communication to promote peaceful coexistence among nations (the name of the language stems from a word meaning “hopeful”). He devoted the greater part of his life to promoting Esperanto’s use and waived any authorship rights to his creation. In 1905, the first World Esperanto Congress was held in France with nearly seven hundred participants and Zamenhof was decorated with the Legion of Honour. By the time of Zamenhof’s death in 1917, there was a dedicated Esperanto community with numerous literary works being translated into that language.

And then the persecutions began… 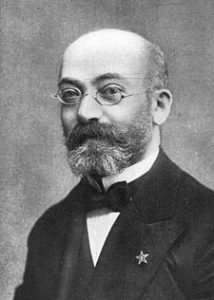 Almost from the beginning, Esperanto was viewed with deep suspicion by totalitarian states with little sympathy for Zamenhof’s internationalist ideals. The rise of Adolf Hitler and the Nazi movement in Germany proved to be especially intolerant of Esperantists due to Zamenhof’s Jewish background and political beliefs (he had been a prominent Yiddish scholar and part of the early Zionist movement). In his work, Mein Kampf, Adolf Hitler specifically mentioned Esperanto as a tool of international Jewish Conspiracy and the language that they would use once they dominated the world. It probably didn’t help that Esperanto use became popular in Eastern Europe and the Soviet Union and, as such, became strongly associated with Bolshevik movements. The fact that Stalin reversed this policy in 1937 and ordered Esperanto’s suppression meant nothing to the Nazis.

Once Hitler came to power, the fate of Esperantists in Germary was essentially sealed. The Ministry of Education banned the teaching of Esperanto in 1936 and eventually ordered the suppression of all Esperanto activity in Germany. At the same time, Stalin was busily purging Esperantists in the Soviet Union (thousands of Esperantists were either executed or exiled).

While Ludwik Zamenhof was safely dead, the same couldn’t be said for his three children, sadly enough. Adam Zamenhof, Ludwik’s eldest child, had followed in his father’s footsteps and became an ophthalmologist. While actively involved in the Esperantist movement, he was also a prominent physician. As Chief of the Starozakonnych Hospital in Warsaw, Poland, he was a natural target of the Nazis when the country was invaded in 1939. After being arrested in 1939, he was sent to the internment camp in Palmirach and shot by the Nazis on January 29, 1940.

His sister, Zofia Zamenhof, was a pediatrician and internist who was living in the Warsaw Ghetto when Poland was invaded. Despite the Nazi presence, she continued her medical practice until she was arrested and transported to Umschlagplatz. As a medical doctor, she was considered sufficiently valuable to avoid being sent to Treblinka but she chose to accompany her young patients there anyway. She was gassed at Treblinka in 1942.

Lidja_Zamenhof is the most famous of the three Zamenhof children. As a member of the Bahai faith, she was actively involved in teaching her religion as well as Esperanto and had gone to the United States in 1937 to promote both movements. After a long stay, she was forced to leave in 1938 when the Immigration Service refused to extend her visa (teaching Esperanto was considered was considered illegal “paid labor”). Following her return to Poland, she traveled the country teaching Bahai and Esperanto until the Nazis invaded. She was arrested at her home in the Warsaw ghetto on the charge of having gone to the United States to spread anti-Nazi propaganda but was later released. Despite opportunities to escape Poland, she refused because didn’t want her helpers to endanger themselves (Poles caught hiding Jews were often executed).

In her last known letter before being transported to Treblinka, Lidia wrote the following: “”Do not think of putting yourself in danger; I know that I must die but I feel it is my duty to stay with my people. God grant that out of our sufferings a better world may emerge. I believe in God. I am a Bahá’í and will die a Bahá’í. Everything is in His hands.” It is believed that she was eventually killed sometime in 1942.

Despite the end of World War Two and the elimination of the Nazi persecution, Esperanto continued to be banned in the Soviet Union and the rest of Eastern Europe until 1956. Esperantists in China were often imprisoned (or worse during the Cultural Revolution) and its current status is still uncertain in most authoritarian countries.

Of the entire Zamenhof family, only Adam’s son, Krzysztof Zaleski-Zamenhof, managed to survive. Along with his mother, Zalenski-Zamenhof managed to escape from Umschlagplatz and remained in hiding until the end of the Nazi occupation. Now a retired professor of architecture, he remains active in the Esperanto movement and has arranged for the World Esperanto Congress to be held this year in Bialystok, Poland (Ludwik Zamenhof’s birthplace).