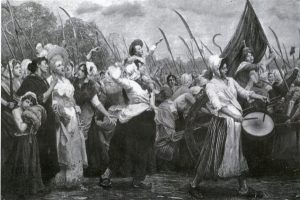 Born Anne-Josèphe Terwagne on 13 August 1762, but better known as Théroigne de Méricourt, Théroigne is a sad, yet fascinating figure who was a political activist of the French Revolution. The French press turned her into a flamboyant caricature, labeling her a “patriots’ whore” or a “female war chief” and praising her for impersonating the “Goddess of Reason.” Although she was considered a heroine of the French Revolution, she was also a polarizing figure that was lauded by some people and hated by others.

Théroigne was born at Marcourt, Rendeux, a municipality of Belgium in the Luxembourg province, and it is from Marcourt that the appellation “de Méricourt” is derived. Her mother died when she was five, and life became unstable for the five-year-old. Thus, she spent most her youth shuffling between relatives: her aunt, her father, and her maternal grandparents, until eventually she was hired as a companion to Madame Colbert.

While as a companion to Madame Colbert, more bad luck followed.

She was seduced by an English army officer who had no intention of marrying her, and with a ruined reputation, she soon found she had no choice but to become a courtesan. As a courtesan, she assumed the name Mademoiselle Campinados and was described as “very pretty, small mignonne and piquante. The dignity of her carriage made her appear almost tall… Her eyes were dark and flashing, her hair chestnut, and she possessed one of those retroussé noses which change the fate of empires.” 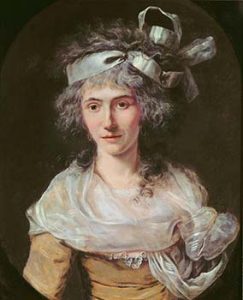 Théroigne de Méricourt on the Eve of the French Revolution, Courtesy of Wikimedia Commons

Eventually, Mademoiselle Campinados found herself in Paris, but any dreams of a good life or continuing as a courtesan were fading as fast as her beauty. Paris was also changing and on the verge of revolution. “Unable to continue in her old calling, she turned politician and tried, with considerable success to pose as une femme savant,” and it was during this time that she fell in love with the revolution, equality, and liberty.

Three days after the Bastille was stormed in 1789, Mademoiselle Campinados “made her first appearance in a political manifestation. Wearing a white riding habit and un chapeau rond, she took part in the procession which went to welcome Louis XVI coming from Versailles to give his blessing to the Revolution’s first triumph, the destruction of the royal prison.” She then embraced the revolution “heart and soul” and began attending debates at the National Assembly.

But just because Théroigne changed her name and embraced the revolution, it did not mean she participated in everything related to it.

For instance, she was curious enough to investigate the gathering of women before they marched on Versailles, but she did nothing to encourage their march or actually participate in it. Proof of her lack of participation exists because later, when marchers were being charged by the Le Châtelet Law Court, of only three of four hundred witnesses claimed to have seen Théroigne at the march. Even then, these witnesses were vague as to whether it was her or not.

Despite the fact that Théroigne was likely not involved with the “Women’s March on Versailles,” a warrant was issued for her participation. This resulted in her fleeing Paris.

Unluckily, another misfortune soon befell her. She was seized and carried off to the Austrian fortress of Kuffstein for supposedly attempting to murder Marie Antoinette. In January of 1792, after the warrant faded and friends helped her get release from Kuffstein, she returned to Paris. Jacobins were thrilled and “received her ‘with all the interest due to her sex and her misfortune.’” In fact, according to one report by a visiting Scotsman, Dr. John Moore, “Théroigne was not relegated to the gallery with her sisters, but sitting in the body of the hall with the men, and wearing a semi-military costume.”

But Théroigne’s luck did not hold and her popularity with the Jacobins lasted no more than a few weeks.

The trouble began when Théroigne started a club for working class women and sought to induce women to join by showing them the signature of the wife of well-known revolutionary leader named Antoine Joseph Santerre. Then, to celebrate the inauguration of the club, “Théroigne, in the names of Robespierre, Jean-Marie Collot d’Herbois, and Santerre, invited the women to ‘a civic banquet.’” The three men were unhappy about the club and believed Théroigne was attempting to create unrest with wives and have them neglect their wifely and household duties. Thus, it was alleged Madame Santerre’s signature was a forgery created by Théroigne, and Robespierre, Collot d’Herbois, and Santerre disavowed any connection to her or her club. Later, at Jacobin Club meeting, things got worse:

Théroigne was present [when] d’Herbois publicly congratulated himself and Robespierre on having forfeited Mlle Théroigne’s friendship. Thereupon that lady, infuriated by the insult, jumped over the barrier separating the women’s seats from the main body of the hall…made her way to the platform and demanded the right of speech. No one would listen to her…and she was forcibly ejected from the Club.

Some months later, in August of 1792, Théroigne found herself involved with the 10 August storming of Tuileries Palace.

Among the prisoners was a pamphleteer named François-Louis Suleau. Suleau had been responsible for scurrilous attacks against Théroigne in the press. In addition, Suleau was also “one of the most prominent and most hated of those prisoners who offered a chance of assuaging the rioters’ lust for blood.”

Théroigne did not recognize Suleau, but after he was pointed out to her, “she [supposedly] designated him to one of the hired assassins near to her, who thereupon massacred him.” His murder was later said to be a precipitating factor in inciting the crowd to storm the Tuileries Palace, which was a defining event in the French Revolution as it resulted in the fall of the French monarchy six weeks later. 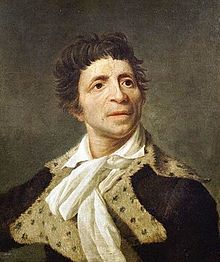 As the French monarchy crumbled, Théroigne distanced herself from the Jacobins and cemented her affiliation with their political foes, the Girondins. At the time it was also customary to flog anyone whose views or conduct was displeasing.

Théroigne found the idea of flogging distasteful, and she “protested against these floggings, and…threatened to make the whippers lick the dust.”

In early 1793, Théroigne became politically active again. This time she composed a series of placards that called for the political involvement of women, and on 15 May 1793, as she crossed the Feuillants Terrace to deliver a speech, she was attacked by female supporters of the Jacobins. They stripped her naked and beat her so severely she could have died had she not been rescued by Jean-Paul Marat, a political theorist, radical journalist, and icon to the Jacobins.

After the beating, Théroigne never made another public appearance and was never the same.

She suffered from headaches, mental troubles, and erratic behavior. On 20 September 1794, she was certified insane and institutionalized. Ultimately, she became a patient at Pitié-Salpêtrière Hospital in Paris where she survived for twenty years, intermittently lucid but constantly speaking about the Revolution. It was during her time at Salpêtrière that she repented of her crimes and “was in the habit, even in the most rigorous season, of throwing three or four pails of water over her bed before she entered it!”

Her charms that had so inspired revolutionaries had long since faded. She was no longer the woman that once declared:

Fellow women citizens, why should we not enter into rivalry with the men? Do they alone lay claim to have rights to glory; no, no…And we too would wish to earn a civic crown and court the honor of dying for a liberty which is dearer perhaps to us than it is to them, since the effects of despotism weigh still more heavily upon our heads than upon theirs…let us open a list of French Amazons; and let all who truly love their Fatherland write their names there.

Instead, one biographer described her as a “blotched, livid, and fleshless creature…whose great love had not been lavished upon a man or upon men, but upon an idea, the passion for justice, for liberty—for the Revolution.”